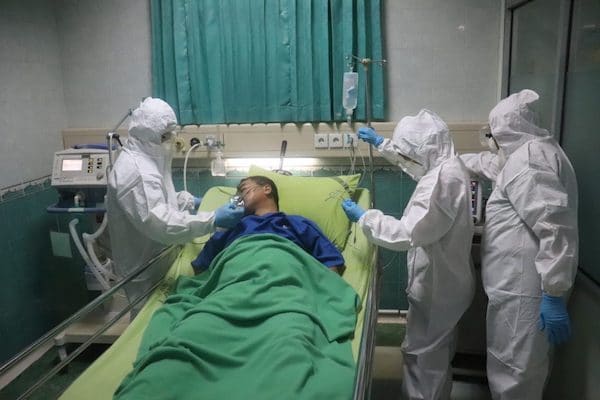 The United States hit a grim record of 2,875 COVID deaths reported in a single day, making Dec. 2 the deadliest day in the country since the pandemic began. The number of recorded infections now tops 14 million and the total official death toll stands at more than 274,000.

And even still, the infection and death rates are massively undercounted. There is no official centralized data source that publicly tracks these statistics nationwide. Healthcare workers have been fired for revealing the extent of damage caused by Coronavirus. A New York Times analysis found that more than 345,000 people have died from March to November in excess of the normal death rate. Globally, the United States with just 5 percent of the world’s population accounts for 18 to 23 percent of all coronavirus deaths.

As winter sets in across the country, the prospects of relief grow increasingly bleak. The second coronavirus wave–long predicted by health experts–has started to take its toll throughout the country, including in rural areas that previously had been lightly affected.

Despite all of the warnings about how devastating the fall and winter could be, no meaningful additional health infrastructure was established. Millions have lost their jobs along with employer-provided health insurance. Healthcare facilities have in fact laid off large numbers of staff. Just in April alone, 1.4 million healthcare workers lost their jobs.

There was plenty of time to prepare. New hospitals could have been constructed, a centralized system for testing and contact tracing established, and medical professionals mobilized and deployed to oppressed communities suffering the worst from the pandemic. The U.S. government instead chose to do virtually nothing.

On Tuesday, a new proposal for a stimulus bill was put forward by a group of right-wing Democrats and so-called “moderate” Republicans in Congress. The bill calls for a $300 per week enhancement to federal unemployment benefits that would expire after four months–only half the $600 per week enhancement that had been in place until last August. It also has provisions for assistance to small businesses, and to state and local governments, but not nearly in the amounts needed to head off economic disaster.

Outrageously, one provision that was included would halt lawsuits against companies and other entities for failing to provide adequate safety measures against the virus. The bill also includes $45 billion to airlines, airports and other transit entities.

This paltry aid is not enough.

Right-wing Democrat senator Joe Manchin, one of the bill’s sponsors, refuses to support Medicare for all, and has even absurdly claimed that the U.S. government can’t afford to pay for Medicare for all because “we can’t even pay for Medicare for some.” Needless to say, Manchin and his colleagues are also not in favor of the cancellation of rents and mortgages, the cancellation of student loan debt, or an income guarantee for all workers for the duration of the pandemic.

More than 60 million people have filed for unemployment this year. Up to 40 million people may face eviction in the coming months. The government is criminally failing to provide relief for tens of millions of people whose lives have been upended by the crisis. Only a strong people’s movement can build the struggle for the bold action needed.