Since the First World War, the Palestinians have been used as a bargaining chip by different Arab regimes to advance their own interests by sacrificing Palestinian rights.

Yet, apologists for the Arab regimes, which recently normalized relations with Israel, defend their governments’ decision with the same arguments the earliest normalizers–Egypt and Jordan–used decades ago, namely that these countries made sacrifices since 1948 by placing Palestinian interests above their own “national”, read regime, interests.

Their decisions to normalise with Israel now, they tell us, have finally placed their own national interests first, and yet at the same time in normalising they are also helping the Palestinians!

A major argument–proffered in this regard–relates to the American-sponsored ideological notion of “peace”, a cornerstone of American propaganda against peoples struggling against colonial and racist oppression, whether in the colonized world or inside the U.S. itself.

“Peace”, which maintains oppressive colonial and racist relations, we are told, brings prosperity, whereas struggling against injustice and oppression, dubbed “war” in U.S. lingo, brings destruction and poverty.

In contrast with the Arab peoples who have ceaselessly shown solidarity with the Palestinians since Britain issued the Balfour Declaration in 1917, Arab regimes, as I have written in Middle East Eye before, have always put their own national interests first and had established ties and collaborated with Israel since 1948 – in the case of the Hashemite Amir Faisal since 1919. Apologists for Sadat’s surrender to Israel claimed for decades that President Gamal Abdel Nasser’s excessive zeal to defend the Palestinians led Egypt, as Egyptian President Abdel Fattah el-Sisi put it in 2014, to sacrifice “100,000 Egyptian martyrs” for the Palestinians. 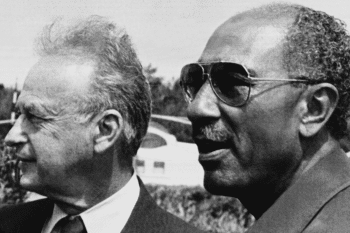 Moreover, King Farouk of Egypt entered the war in 1948 not because he placed Palestinian interests ahead of Egypt’s, but as analysts have shown, on account of his rivalry with the Iraqi monarchy for hegemony over the post-colonial Arab world.

Not only did Nasser not launch a single war against Israel, but also all of Egypt’s subsequent wars were fought to defend Egypt, not the Palestinians. In 1956 and in 1967, Israel invaded Egypt and occupied Sinai.

When Sadat signed the Camp David Accords in 1978, not only did he not defend the Palestinians, he in fact sacrificed the Palestinians and their right to independence in exchange for the return of Sinai to Egypt (without full Egyptian sovereignty) and a lavish U.S. aid package that served to enrich the Egyptian upper classes and impoverish most of the population.

The Jordanian regime, whose army was led by a British colonial general, entered the 1948 war to expand its territory, which it did by annexing central Palestine (renamed the “West Bank”) after the war. In 1967, the Israelis invaded Jordan and occupied the West Bank. In both wars, Jordanian soldiers died for Jordanian regime interests, not Palestinian interests.

When Jordan signed in 1994 its peace treaty with Israel, Palestinian interests were sacrificed yet again by Jordan’s recognition of Israel’s right to exist on stolen Palestinian land, and by securing some sort of Hashemite role over Muslim holy places in Jerusalem.

In exchange, Jordan also received a lavish U.S. aid package benefiting the regime and the upper classes. In contrast with Egypt’s deal, Jordan’s deal was concluded without even requiring Israel to withdraw from any of the territories it occupied in 1967. Jordan’s “peace” with Israel, as a result, legitimised Israeli occupation and conquest and did not reverse any of it.

While historically Egyptian and Jordanian soldiers might have been told they fought these wars for Palestine, the truth of the matter is that, unbeknownst to them, they fought them for their regime’s interests. As for Sudan, Morocco, Bahrain and the UAE, it remains unclear how they had ever put Palestinian interests before their own.

A related argument is the so-called “peace dividend“, heavily marketed by the Americans since the 1970s, wherein we are told all the money spent on wars and armaments with Israel would now be used for economic development and prosperity.

The irony, of course, is that the military budgets of Egypt and Jordan, abetted by huge US military aid packages as a reward, skyrocketed since they normalised with Israel. Economic development and state social benefits were in contrast reduced to unprecedented levels in both countries, bringing about massive poverty, and a decline in educational and health services. Even Jordanian officials who support the peace deal claim that Jordan has not properly cashed in on the “peace dividend”. 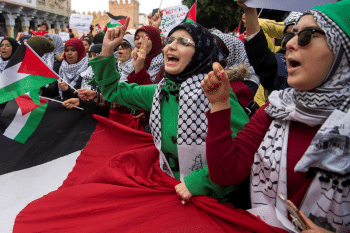 Pro-Palestinian protesters wave Palestinian flags and chant slogans against the U.S. and Israel in Rabat on 10 December, 2017 (AFP)

On the public relations front, as a result of congressional and media hostility to the Saudis and other Gulf countries after 9/11, the oil ruling families decided yet again to benefit at the expense of Palestinian interests by abandoning demands that Israel abide by international law and withdraw from the occupied territories as prerequisites to warmer relations. They quickly cozied up to Israel and its U.S. lobby to stem the tide of such hostility by promising closer relations, which have now become open.

None of this is the stuff of the past, but is part of ongoing normalisation, whereby President Trump announced huge Saudi, Moroccan, Bahraini, and UAE purchases of US arms during the preparation and brokering of the normalisation deals in 2019 and after, which will militarise the region more than ever.

To prove their allegiance to the anti-Palestinian policies of the U.S. and Israel, Gulf officials have ceaselessly attacked Palestinians in the oil-families-owned Gulf media and press in the last few years. Such attacks have recently become more vigorous, especially in Saudi Arabia and the UAE.

Ironically, the UAE had hoped to obtain the sophisticated F-35 fighter planes from the U.S. in exchange for its peace with Israel. Israel and its supporters in Congress, however, refuse to allow this. Humiliated by this outcome, the UAE has suggested to Israeli Prime Minister Benjamin Netanyahu, in order to assuage Israeli concerns, that Israeli fighter pilots take charge of the F-35s for a temporary period, after which they would train UAE pilots to replace them.

Morocco has also finally received U.S. legitimisation of its takeover and annexation of the Western Sahara and Sudan was removed from the U.S. list of terrorism-sponsoring countries. Neither country conceded nor sacrificed any part of its national interest to obtain such rewards.

Rather, like other Arab countries since 1948, they sacrificed Palestinian rights enshrined in international law to obtain benefits for themselves. The Arab League, an enemy of Palestinian interests since its establishment, also refused to condemn these peace deals even though they contradict its standing policy.

Rather than sacrifice their national interests to defend the Palestinians, the Arab regimes have used every opportunity to sell out Palestinian rights to advance their own interests without respite.

Starting with the Hashemite Emir Faisal in 1919 who cooperated with the Zionists to ensure their support for his then Syrian kingdom, to King Mohammad VI’s normalization with Israel to legitimize Morocco’s control of the Western Sahara, the Palestinians have been a God-send to Arab regimes which used and continue to use and abuse them for their own benefit.

Joseph Massad is Professor of Modern Arab Politics and Intellectual History at Columbia University in New York. He is the author of many books and academic and journalistic articles. His books include Colonial Effects: The Making of National Identity in Jordan, Desiring Arabs, The Persistence of the Palestinian Question: Essays on Zionism and the Palestinians, and most recently Islam in Liberalism. His books and articles have been translated to a dozen languages.