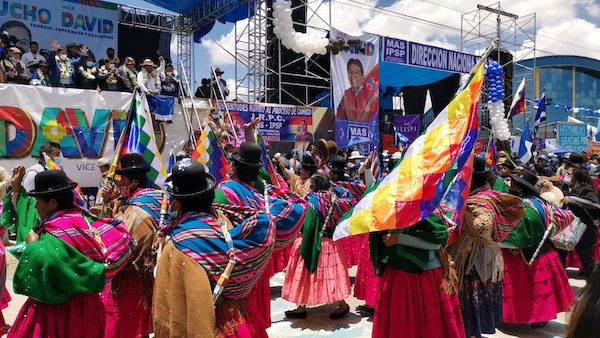 As 2019 ended, Bolivia faced the grim reality of life under a U.S.-backed coup d’état, the advances of over a decade under threat. However, within a year, with their firm conviction and tireless resistance, millions of Bolivians defeated imperialism with democracy in the general elections held on October 18.

Achieving this victory was not easy. After the civic-military coup against democratically elected President Evo Morales of the Movement Towards Socialism (MAS) party on November 10, 2019, and with the installation of the far-right Jeanine Áñez regime on November 12, 2019, Bolivia was plunged into a social, political and economic crisis. Áñez’s de-facto government unleashed an unprecedented level of repression against those who protested against the coup.

The conditions worsened after the COVID-19 pandemic broke out. The regime imposed strict lockdown measures without providing any food or economic aid to its poor and vulnerable populations, nor to the informal workers, many of whom lost their sources of income.

Hospitals and sanitary facilities lacked resources, medical supplies, and trained personnel. The de-facto government refused the assistance from Cuba and China, which had come to the aid of several other Latin American and European countries.

The mismanagement of the health and economic emergencies forced thousands of Bolivians to once again mobilize against the de-facto government. In May, demonstrations took place against hunger and demanding Áñez’s resignation and a fixed date of general elections.

Convincing the interim government to hold the democratic process in the country became another struggle for Bolivians. Áñez’s regime postponed the general elections at least three times, citing the health risk due to the COVID-19 pandemic. Social movements and organizations denounced Áñez for using the pandemic as a pretext to consolidate her power.

In August, Bolivians led an impressive mass struggle that forced Áñez to call for elections. The Central Obrera Boliviana (COB), Bolivia’s trade union center, and the Pact of Unity, a national alliance of grassroots organizations, called for an indefinite national strike and nationwide road blockades to pressurize the government to overturn its decision to delay the elections.

Social movements, trade unions, Indigenous, peasant, rural and women organizations and hundreds of thousands of citizens peacefully mobilized in different parts of the country and blocked more than 140 major highways, roads and streets in all nine departments across the country from August 3 to 14. 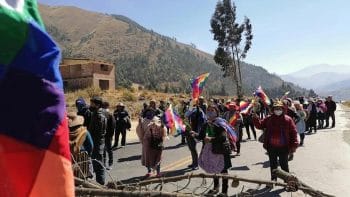 Bolivians blockaded over 140 major highways and roads across the country to demand that the coup-installed government reverse its decision to delay the general elections in the country. Photo: Kawsachun News

The popular uprising forced Áñez to set October 18 as the deadline for holding elections. The organizations warned that they would mobilize again if the coup-installed government refused to accept the results if it lost the elections.

When the regime couldn’t delay the elections anymore, right-wing forces joined hands against the progressive MAS party. This was similar to the right-wing unity forged during the civic-military coup where such forces spewed allegations of electoral fraud, which were subsequently debunked by different institutions and researchers.

Right-wing candidates, including Jeanine Áñez herself, withdrew from the presidential race to unite the conservative vote and prevent the MAS from winning the elections in the first round.

Senator Carmen Eva Gonzáles from the center-right wing Democratic Unity (UD) party even attempted to get MAS disqualified from contesting. However, her attempt based on an allegation that the MAS presidential candidate, Luis Arce, had disseminated the details of an opinion poll outside the time period allowed by the election campaign rules, was rejected by the court.

Arce warned the international community of the risks in the recovery of democracy in Bolivia and denounced the violent threats by the officials of the coup-installed government. Government minister Arturo Murillo and the vice-minister of internal affairs and police Daniel Humérez threatened to use arms in case of a social outbreak post elections.

Political and social tensions were further intensified in the country. Far-right extremist groups began attacking MAS offices. In response, social movements and trade unions associated with the MAS announced that they would mobilize if there was ‘electoral fraud.’

In the days leading up to the elections, international observers, who arrived at Bolivia to monitor the elections, faced widespread harassment and threats from right-wing extremists and government officials. On October 16, an Argentine national deputy, Federico Fagioli, was detained upon arrival at the capital La Paz. He was released hours later only after being shoved by security officials and driven away to an undisclosed location. The authorities justified the action, alleging that Fagioli had been condemned for a serious crime.

Additionally, nearly 12 hours before the polls the preliminary results system was suspended and the military was deployed in the capital, supposedly to monitor the election process.

However, despite all these desperate attempts to derail elections, Bolivians recovered democracy.

Luis Arce and David Choquehuanca of the MAS party won a landslide victory with 55.1% of the votes. An overwhelming 87% of the eligible voters participated in the elections and gave the MAS presidential ticket of Luis Arce-Choquehuanca ticket a clear first round victory. The MAS also won the parliamentary elections, bagging 73 of the 130 seats in the chamber of deputies and 21 of the 36 seats in the senate. 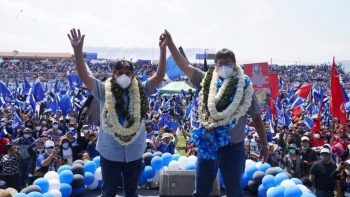 The Movement Towards Socialism’s (MAS) presidential ticket with Luis Arce and David Choquehuanca won a resounding victory in the general elections held on October 18 in Bolivia. Photo: Luis Arce/Twitter

The margin of the victory forced interim president Áñez and the main opposition candidate, Carlos Mesa of the right-wing Citizen Community (CC) party to concede defeat.

The return of democracy and the end of the repressive rule of the de-facto regime was celebrated across Bolivia. MAS’ victory was hailed by progressive leaders across the globe. Even the Organization of American States (OAS) and its secretary general Luis Almagro, who was complicit in the coup, recognized Arce and Choquehuanca’s resounding victory. Just a year ago, Almagro had claimed that Morales had committed electoral fraud, and supported the Bolivian far-right’s calls for the annulling of the elections.

For social movements and political organizations within Bolivia and across the world, the MAS’ historic victory in October 2020 provided further evidence to prove that no fraud was committed in the 2019 elections and that Morales’ victory was legitimate, a fact that to this day the OAS will not admit. Many to this day have mobilized to call for Almagro’s resignation and investigation into his role in the destabilization of democracy in Bolivia.

On December 20, the president of the South American Parliament (Parlasur), Oscar Laborde, announced that an investigation will be launched into the role played by Almagro in the post-electoral crisis that broke out in Bolivia in November 2019.

With the restoration of democracy, the government of president Luis Arce began taking measures to alleviate the socio-economic crisis caused by the COVID-19 pandemic and its mismanagement by the Áñez.

On December 1, the government made the first monthly payment of the ‘bonus against hunger’ to help its vulnerable population. A sum of 1,000 Bolivianos (about 145 USD) will be paid every month until March as financial support to people above 18 who do not receive a salary. Over 4 million Bolivians will benefit from the scheme.

In the second week of December, President Arce also dissolved seven Supreme Decrees approved by Áñez, noting that they were directed towards establishing a neo-liberal economic model in the country.

On December 22, President Arce launched a strategic plan to combat COVID-19. He announced that in the coming days, the government will receive 2.2 million test kits, which will be distributed in laboratories across the country for free testing to help in timely identification of cases and eventual reduction in the mortality rate. Arce also announced that the government will provide COVID-19 vaccine for free to all Bolivians over 18 years of age in 2021.

On December 23, vice-minister of justice Cesar Siles informed that the government is preparing two decrees to grant pardon, amnesty and integral reparation of damages to around 1,500 people who were politically persecuted by the Áñez’s regime. The decree of amnesty and pardon will provide a solution to all kinds of political persecution cases. The decree of integral reparation will offer them economic assistance, health insurance and psychological attention, estimating a compensation of 100,000 Bolivianos (about 14,445 USD) to the victims’ families.

On December 23, the chamber of deputies of the Plurinational Legislative Assembly of Bolivia also approved the bill to tax big fortunes in order to support the nation’s economy. It establishes a new tax on those citizens who have private assets worth more than 30 million Bolivianos (over 4.3 million USD) as of December 31 of this year. The tax will impact over 150 people and is estimated to raise 110 million Bolivianos (about 15.1 million USD). The law to this effect is expected to be promulgated by the first week of January.

The process to seek justice for the numerous crimes committed by former ministers and officials of the coup-installed government is also underway. The Arce’s administration opened investigations against several former officials for their role in various corruption cases, massacres in Sacaba and Senkata. Some were arrested, while many fled the country.

Arce has prioritized the investigation into the massacres during which protesters who mobilized against the coup were shot dead on orders from Áñez’s administration.

Besides accusations related to administrative irregularities, Áñez and several of her former ministers are facing a liability trial related to the massacres in Sacaba and Senkata as well as other incidents of violent repression. 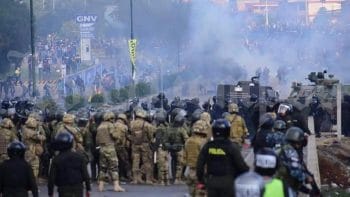 On November 24, the commander of the Cochabamba Military Garrison, General Alfredo Cuellar, was arrested in connection with the massacre in Sacaba city in the Cochabamba department and charged with the crime of murder. On November 27, a court in Sacaba resolved to place him under house arrest.

Likewise, arrest warrants were issued against former government minister Arturo Murillo, former defense minister Fernando López and former oil minister Victor Zamora. However, they have all fled Bolivia. All of them are being investigated for crimes of abuse of power and corruption, among other charges. Former immigration director Marcel Rivas, who helped them in escaping the country, was arrested and is being investigated for the crimes of inappropriate use of influence, concealment, breach of duties and political persecution.

Former director of the Special Force for the Fight Against Crime (FELCC), Iván Rojas, was also arrested and implicated in burning the military service book of former president Morales. In this case, former vice-minister of interior Javier Issa is also being investigated. However, he has also escaped the country. 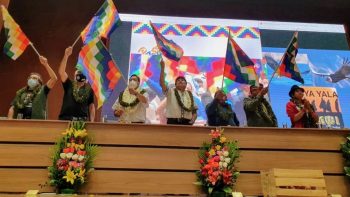 Bolivian president Luis Arce and former president Evo Morales inaugurated the first ‘Meeting of Peoples and Organizations of Abya Yaya towards the construction of a Plurinational America’ at the headquarters of UNASUR in the town of San Benito, in the Cochabamba department, Bolivia, on December 18. Photo: Evo Morales/Twitter

Arce’s government rejoined regional integration bodies such as the Community of Latin American and Caribbean States (CELAC), the Bolivarian Alliance for the Peoples of Our America–People’s Trade Treaty (ALBA-TCP) and the Union of South American Nations (UNASUR), which Áñez withdrew from after aligning country’s politics according to the U.S. imperialist interests.

Arce’s government also renewed diplomatic relations with Argentina, Cuba, Mexico, Nicaragua and Venezuela, which were suspended under Áñez’s rule. The process of rebuilding relationships with China, Iran and Russia is also underway.

Recently, Bolivia hosted the first ‘Meeting of Peoples and Organizations of Abya Yala towards the Construction of a Plurinational America’. The event was joined by around 1,200 representatives of several Indigenous organizations, social movements and trade unions from 11 countries of the region. It was held to strengthen the existing regional integration mechanisms and it concluded with a call for the creation of a new regional integration mechanism: the Union of South American Nations of the People (RUNASUR).