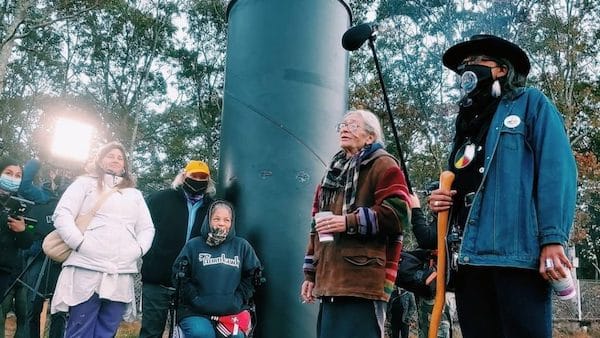 While the United States shudders in the shambles of another election year, whether from a collective sigh of relief or fear of what’s to come, a different system of governance blooms in a swath of woodlands jutting into the Atlantic Ocean. This shandy shoreline now part of what is called Long Island has always been home to the Shinnecock people. A group of Shinnecock women, organized as the Warriors of the Sunrise, are called to rise up in the face of invasive settlement. This is not their first battle.

Members of the Shinnecock Nation know of a time before there was a Southampton, before there was a State of New York. Since the land emerged after the last Ice Age, able to support human life thousands of years ago, the Shinnecock people have lived on what has only recently been called Long Island. Since European settlers arrived in the region in the early 1600s, the Shinnecocks have been fighting against dispossession and intentional, exploitative underdevelopment.

While the uber wealthy flock to their multi-million homes in the Hamptons and continue their leisure practices on the sacred grounds of Shinnecock Hills, the original peoples of the land struggle to raise themselves out of poverty every year. This is not for lack of effort, knowledge and collective will. The land has always been abundant and Shinnecock people have continued to steward incredible ecosystems despite the environmental destruction which followed residential encroachment by the elite. For decades modern-day settlers and colonists have given no regard to the calls of the Shinnecock people to respect and preserve their ancestral grave sites; they have continued to build their mansions and golf courses as they unearth the remains of Shinnecock tribal members. Forcefully relegating the Shinnecock to small reservations, surrounded by the hollow grandeur of seasonally empty mansions and dried up swimming pools, the town and state would prefer to act as if the Shinnecock simply do not exist. 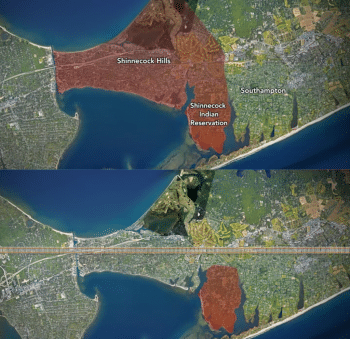 Top: Shinnecock Hills after ratification of treaty. Bottom: Remaining reservation after treaty was broken and a bulk of land was stolen to build a railroad and new wealthy settlements. It was an intentional settler policy to sequester the Shinnecock to the marshiest part of the island, hoping that they would die within two generations.

This indecency is followed by cruel and absurd efforts by the State of New York to prevent Shinnecock self-determination and economic development at all costs.. Last year, the Nation built the first of two monuments and digital billboards on the side of Sunrise Highway. Upon seeing the first monument being erected, Hamponites complained that it was an “eyesore” and petitioned the state for its removal. Similarly, the town had successfully halted recent Shinnecock plans for a small gaming venue.

In siding with the aesthetic desires of their donor class over the ability of the Shinnecock people to feed their families, the State of New York filed a lawsuit against the Nation, claiming that the monument is not on “aboriginal or sovereign lands.” In May of this year, the New York Supreme Court reviewed the case, complete with hundreds of documents affirming Shinnecock ownership, and concluded that it “is undisputed that the Shinnecock Nation’s ancestral domain encompassed essentially the entirety of what is now the Town of Southampton.” Yet, the State refuses to drop their lawsuit, an outlandish attempt to dictate what Shinnecock people can do on their own land. One of the central demands of Sovereignty Camp 2020 is that the State drops this completely baseless and racist lawsuit. We echo the calls to Governor Cuomo and Attorney General Letitia James to drop the lawsuit against the Shinnecock Nation. Unfortunately, they aren’t the only enemies of the Nation.

The particularly powerful Southampton town board is currently headed by Jay Schneiderman, the local vanguard of economic warfare against the Shinnecock Nation. He claims to want to work with the Nation to “help” improve their situation while simultaneously chastising them as an inept and unorganized group of people who live in poverty by their own doing. It is clear that the representatives of Southhampton can accept no sovereign Shinnecock economic development plan aside from keeping members of the Nation in manufactured poverty as a manipulation tactic to get them to sell the land. This strategy is not very different from sanctions used by the United States against its enemies to cripple the livelihoods of civilians.

Scheniderman’s language echoes that of billionaire Michael Bloomberg, former NYC mayor and failed 2020 Democratic presidential candidate who owns a twenty-million dollar estate in Southampton. Bloomberg called the Shinnecock a “disaster” characterized by the typical charge of rampant alcoholism and family dsyfunction—social ills Bloomberg claims to be able to fix with his entrepreneurial interventions. The issue, however, is precisely the decades of actions by New York’s elite that have prevented the Shinnecock Nation from pursuing meaningful forms of economic development, leading to a situation in which 60% of the Nation lives below the federal poverty line. 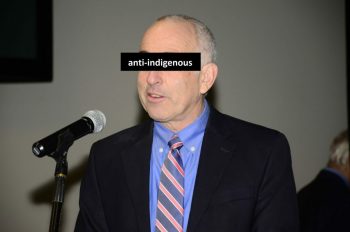 After spearheading resistance against any and all economic development plans by the Shinnecock Nation, Schneiderman implied that the Shinnecock Nation’s manufactured poverty is their own fault because they are too unorganized and refuse to sell their sacred lands to violent developers.

This pattern of paternalism and patriarchal admonishment by white and wealthy Hamptons residents must end. They have much more to learn from Shinnecock traditions of stewardship and kinship than the Shinnecock could ever learn from their destructive techniques of power-grabbing, wealth-hoarding, and environmental destruction.

The lands are Shinnecock and as a sovereign nation, their actions do not need approval by state or even the federal government, though in fact the higher courts have explicitly validated Shinnecock claim to the lands abutting Sunrise Highway. The Southamptonites who are on land stolen from the Shinnecock people have never consulted with the members of the Nation as they pursue an appalling amount of overdevelopment that has polluted the land and water which the Shinnecock still rely on as a food source. Why is the Shinnecock Nation expected to seek the approval of these thieves to simply build a monument on their own land?

The Shinnecock people have a right to determine their future and the best means to secure such a future for their young while also caring for the elders. The Red Nation unequivocally denounces the economic warfare which is being waged on the Shinnecock Nation.

Jay Schneiderman speaks only for his wealthy constituents when he says the monument signs of the Shinnecock Nation transgress the (manufactured) image of a quaint town. It is the mansions of those who literally buy into this image that are out of place. Their exorbitantly expensive homes, all the more garish while a housing crisis looms over so many, are an insult when they are built on sacred burial grounds and stolen land. The struggles of the Shinnecock Nation highlight a clear example of ongoing genocide against Native peoples, now transformed into the image of neocolonialism, specifically through economic sabotage and sanctioning of economic development.