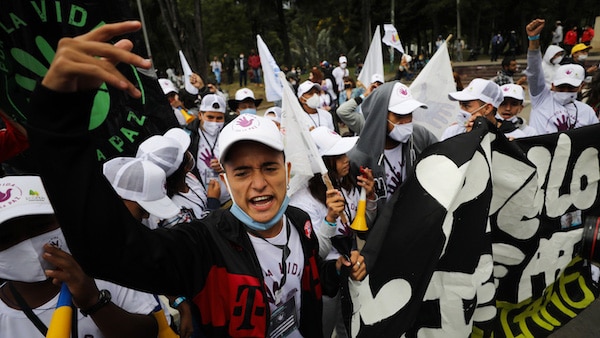 Ex-combatants of the disbanded FARC and social activists march to demand the government guarantee their right to life and compliance with the 2016 peace agreement, in Bogota, Colombia, Sunday, Nov. 1, 2020. The mobilization coined “Pilgrimage for Life and Peace” is motivated by the murders of ex-combatants after the peace process. (AP Photo/Fernando Vergara)

It is the festive season in Colombia, but not everyone is celebrating. Sunday brought news of the ninetieth massacre of the year. Five people were found dead in Bolívar Department in the north of the country, among them former leftist guerilla Rosa Amalia Mendoza and her infant child. Meanwhile, just hours earlier in the southwestern department of Cauca, the brutally tortured body of 55-year-old Manuel Alonso Villegas was found on a roadside close to his hometown of Miranda.

Both Mendoza and Villegas had been members of the leftist guerilla group the FARC until 2016 when they and many others agreed to permanently lay down their weapons in a historic peace deal that promised to end the country’s decades-long civil war. Mendoza, 25, had reportedly become involved in local activism, founding the South Bolívar Agricultural and Environmental Housing Association. Meanwhile, Villegas had turned his hand to handicrafts, making custom shirts and other items. He was also active in a number of local community agricultural development projects.

Colombia’s 90th massacre of 2020 under the watch of narco-president @IvanDuque: Ex-FARC guerrilla Rosa Mendoza, 25, her newborn baby and 3 others were murdered on Saturday. Mendoza was the 249th signer of the 2016 peace accords to be assassinated. pic.twitter.com/XbDwlIYMtS

His body was found only 200 meters from the gate of his community’s collective farm, something which locals perceive as a calculated “message.” “The community is really scared,” one local said, in a recording shared with MintPress. This was not the first time the town had experienced such terror. Last year, two brothers had also been murdered. Their mother died of a heart attack at their funeral.

James Jordan, National Co-Coordinator of the Alliance for Global Justice and a friend of Villegas’, spoke to MintPress about the incident. “Manuel was a master woodworker and had a room full of items he was selling, all the way from little stands to put your cell phone on to really nice beds and rocking chairs and cabinets,” he said.

One encounters news of all these killings and atrocities and massacres by the armed forces, paramilitaries and other armed groups. But when you get to know a community and see how eagerly they are working for peace, how enthusiastically they have handed over their guns for plows and sewing machines and woodworking tools, when you visit with these people where they live, share meals together, dance, play soccer, together, the depravity and cruelty of the enemies of the peace becomes visceral. I can still see Manuel’s face and to think of how his life and dreams have been extinguished so brutally is just not acceptable. Not only must we demand his murderers be apprehended and punished, but if we would see justice, we have to make Manuel’s dreams and hopes and spirit of peace our own.

A secret campaign of targeted assassinations

However, the violence has only stopped in one direction as precious few of the government-aligned far-right paramilitaries have demobilized. Villegas and Mendoza are the 248th and 249th signatories of the 2016 deal to be murdered to date, suggesting a secret campaign of targeted assassinations. The Common Alternative Revolutionary Force condemned the violence, complaining that Colombia “does not give guarantees to those who [have] bet on peace.” 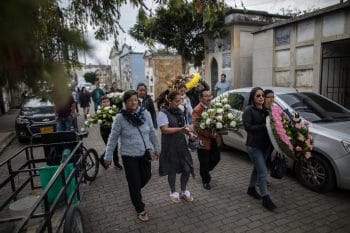 The government has half-heartedly suggested drug trafficking as an explanation for many of the massacres, but few appear convinced. “If drug trafficking were a determining factor in homicides, it would be expected that this phenomenon would occur mostly in the coca-growing municipalities. However, the evidence indicates the opposite,” stated Giovanni Álvarez, Director of the Colombian Investigation and Accusation Unit.

While the homicide rate in Colombia has fallen this year, massacres have, by contrast, greatly increased, as has their bloodiness throughout 2020. Altogether, 375 people have now been murdered in mass killings this year, according to local human rights group Indepaz. “Every massacre is a message,” Manuel Rozental, a physician and longtime activist living in Cauca, not far from Villegas’ home, told MintPress earlier this year. “The massacres are methodic, systematic. It is a job being done as planned.”

Earlier this month, United Nations’ High Commissioner for Human Rights Michelle Bachelet called on the government to take “stronger and much more effective action to protect the population” from “appalling and pervasive violence.” “It is the state’s duty to be present throughout the country, implementing a whole range of comprehensive public policies, not only to clamp down on those responsible for the violence, but also to provide basic services and safeguard the fundamental rights of the population,” she added.

Few, however, seem to be expecting a radically different 2021. Colombia has long been the most dangerous place in the world to be an activist. Since 1989, according to human rights group Justice For Colombia, over 3,000 trade unionists have been assassinated, more than in the rest of the world combined. “In almost 100% of these killings, the perpetrators act with impunity,” Jordan said. This afternoon, Norbey Antonio Rivera from Cauca, became the latest social leader to be assassinated.

Current president Ivan Duque is a strong conservative and a protege of the country’s former leader Álvaro Uribe, a figure who has dominated Colombian politics for most of the twenty-first century. Both Duque and Uribe bitterly opposed the 2016 peace deal, beseeching the public not to back it. Since assuming office in 2018, Duque has attempted to roll back parts of the agreement. 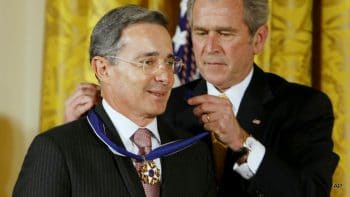 President George W. Bush presents the Presidential Medal of Freedom to Colombian President Alvaro Uribe, Tuesday, Jan. 13, 2009, during a ceremony in the East Room of the White House in Washington. (AP Photo/Gerald Herbert)

Uribe has an extremely close relationship with both the far-right paramilitary groups and organized drug cartels. While president from 2002 to 2010, he oversaw a years-long wave of murders of peasant, union, and indigenous leaders that resulted in over 10,000 deaths. Dubbed the “False Positives Scandal,” government-controlled forces would kill anyone they wished, later framing their victims as members of the FARC, both clearing their own name and justifying even more security spending. This allowed Uribe to impose his rule on the country, intimidating opponents into silence. His own political campaigns came financed, in turn, with money directly from the notorious Medellin drug cartel.

Paramilitary groups continue to hold considerable influence inside the country to this day. The COVID-induced lockdown has made it even easier for the death squads who still terrorize the country to operate freely, knowing precisely where their targets will be and meeting little organized resistance. Over 1.6 million Colombians have tested positive for coronavirus, with 42,620 deaths reported as of Wednesday–a similar per capita rate to the United States.

Who is to blame for this violence, and can it ever end? Jordan was clear that, while Colombians might be paying in blood, this was not a purely internal affair, and the source of the violence laid closer to home.

Painfully, I have to repeat what so many have said before, that political violence in Colombia is fueled by U.S. government policies. The United States continues to provide weapons and direction for the Colombian armed forces, police, and jails, and it has all too often directly encouraged and even funded the leaders of private death squads. The Trump administration also waged a full scale campaign to undermine Colombia’s peace accords. We must not waste our time hoping the Biden administration might reverse course, we must demand it,” he told MintPress.