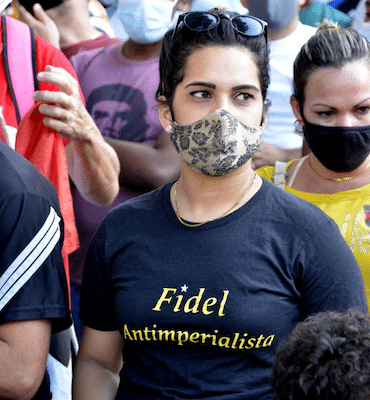 The chants of “Down with imperialism! We need another world,” at the Trillo Park rally, make more sense now than ever. Photo: Juvenal Balán

Today millions of dollars are destined to propaganda of all kinds to make us believe that class is an obsolete category, that analysis of any social problem must be conducted with no such reference, following the concepts of liberal thought with the most careless, ahistorical relativism. Nevertheless, for the majority of persons in the world, the reality is not much different from that of the English proletariat described by Engels in The Condition of the Working Class in England. It makes more sense now than ever for us to shout

Down with imperialism! We need another world!

So, why rule out class as a category for social analysis? Precisely because of its capacity to provide a reading of reality with exploitation as the most fundamental of social evils, and its power to convoke collective action against the very essence of the capitalist system and all that which attempts to reproduce it.

Cuba’s national literacy campaign, directed by the Municipal Education Council created by the revolutionary government in 1960, specifically for this end, had an antecedent in the Rebel Army, which had, at the time, had already begun literacy work in its ranks. It was a genuine collective action in the political sense, that is, one directed toward the transformation and construction of a new society.

The established order, with knowledge as a privilege of the few, was up-ended to institute a new order in which opportunities would be available to all. This was the spirit of the 1962 University Reform that completely transformed higher education in Cuba and the role played by universities in the construction of the emerging social project, mobilizing an important sector of students and professors who energetically created classrooms committed to the great challenge they faced. Many efforts of the same nature have been undertaken during the revolutionary process, collective actions convoked by the country’s leadership.

When the Committees for the Defense of the Revolution were created in 1960, perhaps a paradigmatic change took place in the ways people had organized for collective action around the world. Understood initially as a means of defense against aggression promoted by the United States, the fact is that they became a meeting place for interaction and discussion of public issues, everything related to the common good, also with a genuinely political sense. With this same characteristic, other political and mass organizations were born, imagined as instruments for the defense of collective interests, the construction of a new model of a country which required institutionality, new ways of organization and struggle. Nothing could have been more revolutionary at the time.

Nonetheless, over the course of 60 years, important changes have taken place, in our country and globally. Many of the notions modernity has given us are now facing a deep crisis. We are witnessing the discrediting of capitalism’s promises of progress and human development, its model of democracy and freedom, its inability to guarantee basic rights and wellbeing for all men and women. Denying this reality today, documented with chilling figures, is an act of profound cynicism and irresponsibility, at least.

We spend time on the internet navigating across platforms and search engines with very specific algorithms to conduct surveillance and control our subjectivity for marketing purposes. Consumption has been re-dimensioned as the measure par excellence of wellbeing, while, as Baudrillard would say, the sensation of freedom generated is an illusion. In reality, never before have we been so carefully supervised and controlled. Our consumption, as the author states, is not a function of pleasure, but rather production.

The globalization they attempted to present as a process that would provide greater opportunities for interaction, for all, turned out to be a platform for homogenization and extension of the hegemony of giant transnationals, not only economic hegemony, but also cultural, the hegemony of liberal dogma.

More sophisticated mechanisms are emerging to colonize collective imaginations. The war for control of territories is reflected in a symbolic war without precedent–an intense dispute for control of our senses. They want to convince us that we cannot construct or defend an alternate, non-capitalist way of life! Concepts that in other eras were the great paradigms of a future longed for by most peoples–socialism and revolution–are today being hammered in political propaganda and disinformation campaigns. While, concepts like plurality, democracy, political rights and freedom are gaining prestige, with no critical analysis of the conditions that make their realization actually possible in the context of capitalism, and no consideration of how we could expand them in a socialist society, where effective gains made in the exercise of rights and equality are undeniable.

Research studies have identified a tendency among youth on a global scale to vacillate between apathy regarding political issues and the exploration of other ways of coming together and participating, other ways of thinking about collective action, and also other political narratives. Many anti-capitalist social movements in the region have experimented with novel modes of resistance, organization and struggle, in which the relations between power and the collective have been re-invented. De-colonial anti-capitalist feminists have given a lesson as to how strong, authentic movements can be developed to confront, in an articulated manner, different types of violence which are intertwined within the context of capitalist class exploitation, but are not limited to it. A portion of Latin American thought has taken a de-colonial turn to insist on taking our own realities and dilemmas as references, to overcome a sub-alternate attitude in the face of hegemonic culture. These are all valid sources, producing practices and knowledge in which we can recognize ourselves with a purposeful attitude, on the basis of our own history of struggle and resistance, which is also solid.

Political and mass organizations in Cuba, heirs to the profoundly popular and revolutionary sense with which they were created within a process that proposed to change everything, innovators in terms of organization for collective political action, are facing the historic opportunity to update their mechanisms of participation at the grassroots level, their narratives in defense of socialism, their ways of getting together and debating, types of leadership and outreach.

Political education, with a deep sense of Martí’s ideas, is urgently needed: “Making every man a summary of the living world, through the day he lives, placing him on the level of his time, so he floats above it, not leaving him below his time unable to rise to the occasion, is preparing a man for life.” And today preparing men and women means equipping them with critical thinking to commit themselves to take action in a world in which our very ability to survive is at stake.

How can new generations be trained to understand the complexity of our era and not remain anesthetized by all the propaganda that promises an unsustainable mode of life and society? How can a counter culture be created to resist the ideology of consumption, liberal values, disinformation, the relativism of a system in which the measure of everything is reduced to its market value? How can we educate for critical thinking and political commitment faced with propaganda that promotes banality, apathy and individualism?

How can we spread the idea that politics is not the exclusive field of social actors who formally hold a given position? Politics, as the Revolution has shown since its first days, is the everyday arena in which we clarify everything that makes sense in our lives. The personal is also political. Politics is the struggle of all men and women for the construction of a better society; everything we do, wherever we can, to make this possible. Organizations must assume this process without removing its warmth, imagination and effervescence, mounting resistance to any campaign against Cuba’s socialist project. And doing so, above all, so that it is not hijacked by those who want a return to the capitalist past that will be no less onerous than it once was.

Today, U.S. investment in the fabrication of a platform of digital media to change our political system and a media-smart civil society with the same goal, is expressed in the emphasis on opinion trends of a markedly liberal nature. With little mobilizing power, they seek recognition as legitimate actors on the Cuban political stage, with no other intention than to provoke ruptures in our consensus in support of socialism and roll out an agenda of changes in Cuba that would be convenient for U.S. interests.

The intention is to pass off this mediatic civil society–manufactured in the United States–as the voice of the Cuban people, and this cannot be considered anything less than a call to action regarding the need for our political organizations to show leadership and play a leading role attuned to the new circumstances.