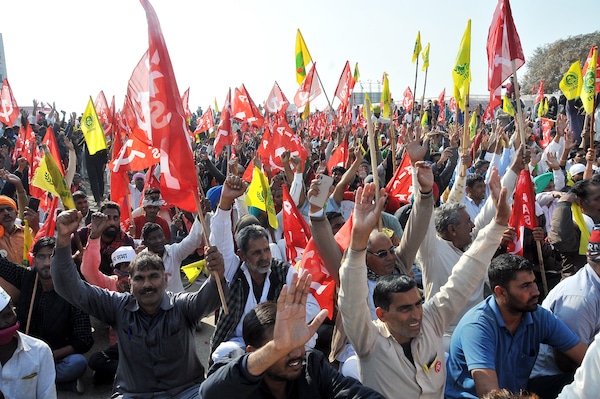 The True Significance of the Historic Farmers Struggle

THE kisan struggle that began on November 26, 2020, has been the largest, the longest and the most powerful nationwide farmers’ struggle in the history of independent India. This struggle has several distinctive features.

First, it is led by over 500 farmers’ organisations in the country, who have united under the platform of Samyukta Kisan Morcha (SKM). All sections of the peasantry have joined together.

Second, it has combated tremendous repression from BJP governments in the form of teargas shells, water cannons, lathi charges and indiscriminate arrests, and has overcome it all.

Third, it has faced constant defamation from the BJP-RSS and has been accused of being instigated by Khalistanis, Maoists, Naxalites, and by Pakistan and China. It has stood its ground.

Fourth, in spite of lakhs of farmers laying siege to Delhi for over 40 days, it has been completely peaceful and democratic. Over 55 farmers have been martyred in this struggle so far.

Fifth, it has been entirely secular. The farmers in struggle all over India belong to all religions, all castes and speak all Indian languages. This has made it more difficult to suppress the struggle.

Sixth, after the unprecedented success of the Bharat Bandh on December 8, with great support from the working class and all other sections of society, it is becoming a people’s struggle.

Seventh, and most importantly, this struggle has directly identified and attacked the corrupt nexus between the BJP-RSS-led central government and the Indian and foreign corporate lobby, symbolised by Ambani and Adani. For the first time, a nationwide call has been given for the boycott of Ambani and Adani products and services. Through its three major demands, the struggle has squarely attacked the neoliberal policies themselves.

The first demand is the repeal of the three anti-farmer, anti-people and pro-corporate Farm Acts which were passed through Parliament after trampling on all democratic norms. No kisan organisation worth its name had demanded any of these laws and no kisan organisation was ever consulted before these laws were first promulgated as ordinances in June 2020. Although agriculture is a state subject under the Constitution, no state government was ever consulted. The same method was used to annul 29 labour laws that had been won by the working class after bitter struggles and to ram through four anti-worker Labour Codes through Parliament.

The first Farm Act aims to dismantle APMCs and hand over the entire trade in agricultural produce to domestic and foreign corporates. This will destroy farmers and agriculture, and will also compromise the food security of the country. The Bihar state government under Nitish Kumar dismantled APMCs in 2006. As a result, farmers in Bihar are getting around Rs 800–Rs 1,000 less per quintal of paddy than the MSP which is Rs 1,878. This Act eventually aims to do away with MSP and government procurement of food grains altogether. With this, the entire public distribution system will be dismantled. This will hit millions of both urban and rural poor.

The second Farm Act aims to encourage and promote contract farming across the country. As our previous experience of contract farming in India and the world shows, this will only help the powerful corporate companies to loot the farmers. In a travesty of justice, there is no provision for farmers for approaching courts in case of any dispute. The real alternative to corporate farming is co-operative farming, which the government is not at all willing to consider.

The third Farm Act is a disastrous amendment to the Essential Commodities Act. The central government has removed all restrictions on stocks of seven most essential items, viz. rice, wheat, pulses, sugar, cooking oil, onions and potatoes. This will give the corporates and the big traders a free hand to hoard and black market these essential items and will hike their prices manifold. This will also endanger food security. In the Global Hunger Index figures declared recently, India already ranks 94th among 107 countries. This will aggravate even further.

LEGAL GUARANTEE OF MSP AND PROCUREMENT

The second demand is for a law to guarantee MSP and procurement of all agricultural produce at one and a half times the comprehensive cost of production (C2 + 50 per cent), as recommended by the National Commission on Farmers, headed by Dr M S Swaminathan. The Modi regime is telling a white lie when it claims that it has already implemented MSP at this rate. It has applied the formula A2 + FL, which is much lower than C2 + 50 per cent, and has thus tried to deceive farmers.

Moreover, in most parts of our country, the MSP declared by the central government for 23 different crops has no meaning, simply because there is no government procurement in most of the states. Hence traders routinely buy agricultural produce from farmers at much less than the MSP. Even in Punjab and Haryana, government procurement is restricted to only paddy and wheat. Hence this is a key demand of farmers from all over the country.

Successive central governments implementing neoliberal policies have increased the cost of production in agriculture manifold over the last three decades. One, by slashing subsidies on agricultural inputs like fertilisers. Two, by encouraging corporates in the manufacture of seeds, fertilisers and insecticides. Three, by greatly increasing the price of diesel, petrol, power and irrigation. However, the price that the farmer gets for the crop has never increased in the same proportion. This is the root of the agrarian crisis and massive peasant indebtedness, leading to farmer suicides on the one hand and distress sales of farmland on the other.

This is further aggravated by natural calamities like severe droughts, floods, hailstorms and unseasonal rains, with no proper crop insurance cover. The PM Fasal Bima Yojana has proved to be a farce, enriching corporate insurance companies at the expense of farmers. With huge amounts of credit being channelised to the corporates, there is a credit crunch in the farm sector, especially for small and middle farmers. The agricultural import-export policies adopted under WTO dictates and Free Trade Agreements (FTAs) have also hit farmers very hard.

It is for all these reasons that the farmers struggle has demanded a law to guarantee MSP and procurement at one and a half times the cost of production. Another related demand of the peasant movement has been a complete loan waiver to the peasantry by the central government, which has no compunctions in granting loan waivers and tax waivers of lakhs of crores of rupees per year to its handful of favourite crony corporates.

The third demand is the withdrawal of the Electricity (Amendment) Bill 2020, which shamelessly promotes further privatisation of power and aims to end cross-subsidy. This will lead to a massive hike in power bills not only for irrigation pumps of farmers but also for domestic use in both rural and urban areas throughout the country. This will hit all sections of working people.

The agrarian crisis in India has reached extremely serious proportions due to the neo-liberal policies of the last three decades. As per the figures of the National Crime Records Bureau under the union home ministry, over four lakh farmers in India have been forced to commit suicide due to indebtedness in the last 25 years from 1995 to 2020. Lakhs of children of adivasi, dalit and backward families in our country die every year due to starvation and malnutrition.

The nakedly pro-corporate policies of the Modi-led BJP government, which are aimed at selling off the whole country under cover of the hypocritical slogan of ‘atmanirbharata’ are making things much worse. There is almost no sector in India which the Modi regime has not put up for privatisation and sale to Indian and foreign corporates – be it railways, airlines, airports, ports, mines, telecom, public sector, banks, insurance, irrigation, power, education, health, and even defence. Now it is agriculture and land which is on its hit list. And this is being bitterly opposed.

The true significance of the ongoing historic farmers’ struggle throughout the country is that it strikes squarely at these disastrous and anti-national policies of the BJP-RSS regime, which has always acted as the most servile agent of the corporate and imperialist lobby, right from the days of our glorious freedom struggle. It is a patriotic struggle waged by millions of farmers not only for themselves, but also in defence of the people and of the entire country.

The All India Kisan Sabha (AIKS) has been and is an integral part of the united leadership of this struggle. It appeals to all peasants, agricultural labourers, workers, employees, women, youth and students to strengthen this crucial struggle in all possible ways, until victory is achieved.