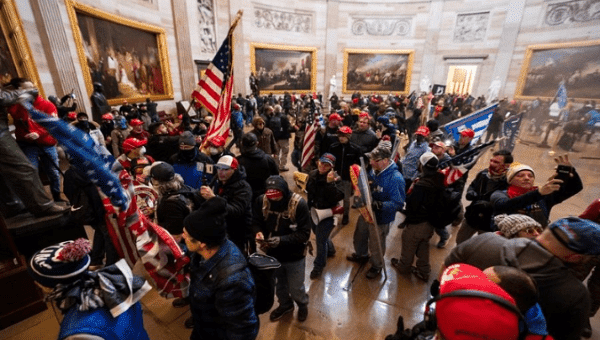 Pointing out their discord to the violent actions aimed at disrupting the certification of electoral results, twelve senior officials and White House’s member staff have resigned so far.

She pointed out that there was no “mistaking” the impact Trump’s rhetoric had on the situation, adding that the violent breach was “the inflection point” for her.

Transportation Secretary Elaine Chao was the first cabinet member to step down while also noting the unrest had “deeply troubled” her in a way that she could not stand aside.

“Yesterday, our country experienced a traumatic and entirely avoidable event as supports of the President stormed the Capitol building following a rally he addressed,” Chao wrote.

IMPORTANT: This is a video I captured inside one of the offices of Nancy Pelosi after dozens of alleged Trump supporters occupied it

The violent storming of the Capitol by a mob of Trump’s supporters left five people dead and around 70 detained. It was intended to prevent congressmen from certifying the electoral victory of the President-elect Joe Biden.

Lawmakers from both the Republican and the Democrat parties have condemned Trump’s responsibility in the attack while House Speaker Nancy Pelosi has promoted an impeachment based on the 25th Amendment to expel Trump out of office.

#FromTheSouthNewsBits |
Political analyst Arnold August stresses that these violent scenes from today at the Capitol are unprecedented in the United States, but are common when it comes to its foreign policy, actively promoting coups throughout the world. pic.twitter.com/t7L4Ut61kg