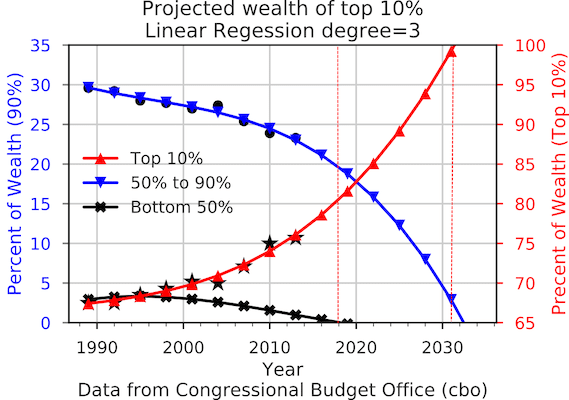 The United States prepares for moving out of the Trump era with the incoming President promising more rounds of stimulus spending to revive an economy ravaged by COVID-19. Other members of the Organisation of Economic Cooperation and Development, a predominantly rich nation’s club, have also been generous with their spending and signalled that they are willing to keep their wallets open to spend more if necessary. The evidence clearly is that the Covid-crisis has upended the fiscal conservatism that has been the hallmark of the neoliberal era since the 1980s.

However, not all nations seem to display this ability to depart from the prevailing orthodoxy. Where this weakness is most visible is the developing world, where governments, with very few exceptions, have not been loosening their purse strings to deal with the health emergency, throw out a safety net to protect devastated citizens, and stall and reverse the recession to restore livelihoods and normal economic activity.

Estimates from the World Bank in the January 2021 edition of its flagship Global Economic Prospects (GEP) report point to stark differences across countries at different levels of development in the level of fiscal support governments have provided in the wake of the Covid-shock (Chart 1). While planned and under-consideration measures in the advanced economies (AEs) are expected to have taken fiscal support spending to 22.6 per cent of their GDP, the comparable figures in emerging market and developing economies (EMDEs) as a group and low income economies (LICs) among them are placed at 6.2 and 2.4 per cent respectively (Chart 1). Government spending in 2020 was needed not just to address the immediate crisis, but to revive employment, investment and growth in the medium and long term. If poorer countries have spent and are likely to spend less, while richer countries pump-prime their economies, the damage inflicted by the crisis is bound to worsen preexisting inequalities. Those inequalities are bound to increase, though the performance of a few exceptional cases like China, which influences the EMDE total, may conceal the magnitude of change in the aggregate figures.

Underlying the difference in spending levels are the willingness and ability to resort to enhanced deficit spending, or expenditure financed with borrowing. Not that government debt has not risen in the poorer countries, albeit to a smaller extent than in their advanced counterparts. While the fiscal deficit in the AEs is estimated to have risen from 3.3 per cent of GDP in 2019 to 14.2 per cent in 2020, that in the EMDEs has moved from 4.8 per cent to 10.4 per cent and in the LICs from 3.3 to 5 per cent (Chart 2). 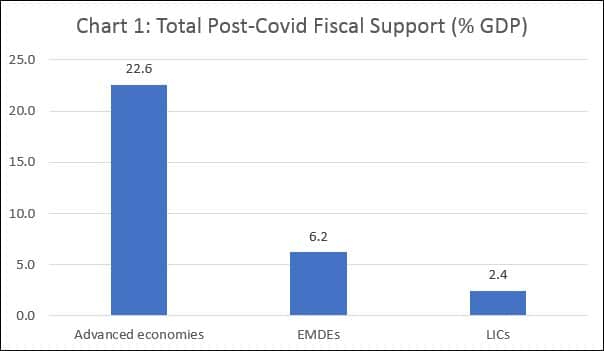 One consequence has been a significant increase in public debt in the EMDEs of almost 9 percentage points of GDP between 2019 and 202, as compared to 4 percentage points over the two-year period 2017-19 (Chart 3). But with the revenue base having shrunk because of the Covid-induced contraction in economic activity, reducing the expenditures that can be financed with current revenues, the additional stimulus from this deficit spending would have been partly neutralised. Yet the effort to address the crisis with proactive fiscal policy cannot be denied, even if the intensity of that effort was much small in poorer countries, especially the LICs. 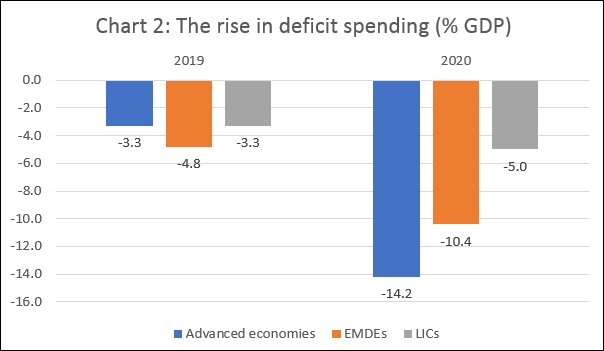 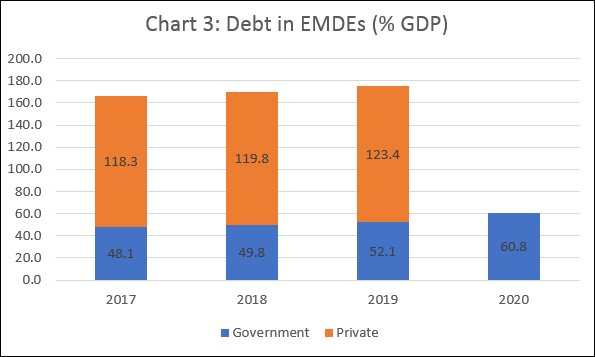 The difference in the extent of deficit spending, that is set to widen global inequalities, is the result of the unwillingness of governments in developing countries, especially the poorer ones, to extend themselves when faced with a crisis as severe as that due to COVID-19 has been. The unwillingness stems from the shift over many decades in the EMDEs to a neoliberal development strategy, a core element of which is fiscal conservatism that reins in the deficit. That shift was partly due to conditionalities imposed by the Bretton Woods institutions in the past and partly to voluntary government action. But in the face of the pandemic the IMF and the World Bank have been open to and even recommended debt financed spending. The question is why developing countries, when faced with evidence that developed country governments that advocated such conservatism and even an adherence to austerity have dropped that perspective, have not adequately responded to the crisis with stimulus spending?

One reason is the fear that enhanced deficit spending could trigger the flight of foreign investors, especially from financial markets. A feature of recent capital account trends even in poor countries is the growing reliance on private sources of capital, which have ‘discovered’ many low income economies as “frontier markets”. The share of private non-guaranteed debt in the total external debt stock of LICs increased from 3.2 per cent in 2010 to 8.5 per cent in 2015 and 10 per cent in 2019. These figures are likely to have spiralled over the last year. According to the Financial Times (September 16 2020), the Institute of International Finance estimates that borrowing by all emerging market governments from international bond markets rose by $100 billion between April and August 2020. Private foreign creditors and investors abhor proactive fiscal policy measures. So the accumulated presence of private foreign debt and investments generate fears that resort to deficit spending may cause the exit of this capital.

Secondly, in many poor countries, even in normal times, increased demand spurred by increased government expenditure is likely to raise the volume of imports and the import bill, because of high dependence of domestic consumption and investment on foreign supplies. The domestic supply shocks induced by partial or severe lockdowns necessitated by the pandemic have increased that import dependence. Financing these increased imports is bound to be difficult because of the fall in export earnings and in remittances from workers abroad because of the global recession. So, much of the additional borrowing would have to be in foreign exchange and may be difficult to come by and available only at exorbitant interest rates. Most poor countries are already experiencing debt distress, and the half-hearted support of the advanced economies, in the form of Debt Service Suspension Initiative for example, has been far too little. In fact, according to the GEP, only 44 of the 73 eligible countries opted for the DSSI. Others have held back since a DSSI-recipient tag would reduce the sovereign credit rating of the country concerned and limit access to additional private credit. In the circumstances, fearing a balance of payments crisis that would necessitate even greater austerity, countries tend to curtail incremental government spending.

The worsening of global inequality that these constraints on poor country stimulus spending result in would be accentuated in the medium and long term. Lower spending, at a time when health and social safety net expenditures increase because of the pandemic, would mean that the axe will fall disproportionately on capital spending. As a result, future income growth would slow, adversely affecting future government revenues and the ability to service even the prevalent level of public debt. That would necessitate staying with austerity, aggravating the growth slowdown.

Global inequality is set to rise, bringing with it increased social deprivation.

(This article was originally published in the Business Line on January 11, 2021)