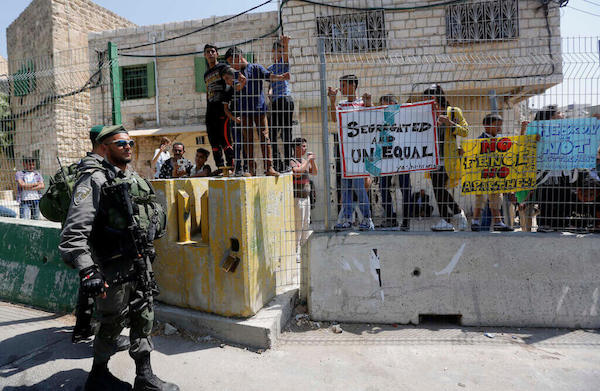 This writer for a long time hesitated to go beyond the broad consensus that designated the oPt an apartheid regime while leaving open the proper legal description of the regime inside the Green Line. However, while researching a lengthy legal appendix to “Gaza: An Inquest into Its Martyrdom,” this writer was persuaded that the entire area from the “river to the sea” should be denoted an apartheid regime. The basis of this conclusion was simple and straightforward: A) the defining feature of an occupation under international law is that it is temporary; if it is not temporary, then it constitutes an illegal annexation; B) after more than a half-century of Israeli “occupation,” and after repeated declarations by the Israeli government that it didn’t intend to withdraw from the oPt in conformity with international law, the only reasonable inference was that the oPt had been de factoannexed, regardless of the formal legal label Israel attached to them; C) Israel “from the river to the sea” thus constituted a single entity; if the presiding regime disenfranchised or severely qualified the citizenship rights of its non-Jewish population, then it constituted an apartheid regime.

The respected Israeli human rights organization, B’Tselem, has now officially reached this conclusion: “[T]he entire area between the Mediterranean Sea and the Jordan River is organized under a single principle: advancing and cementing the supremacy of one group—Jews—over another—Palestinians”;

A regime that uses laws, practices and organized violence to cement the supremacy of one group over another is an apartheid regime.

The B’Tselem position paper focuses on four aspects of Israeli apartheid. Two aspects—Jewish-only immigration and Jewish-only land development—operate in the whole of this Jewish supremacist state, and two aspects—blockages to freedom of movement and to political participation—are qualitatively more pronounced in the West Bank, including East Jerusalem, and Gaza.

It is this writer’s opinion, however, that, repellent as are these features of the Israeli regime, the aspect that most manifests its Jewish supremacist character is the worthlessness it attaches to Palestinian life. As B’Tselem and other major human rights organizations have documented on literally a daily basis, Palestinians are routinely murdered with impunity by private Israeli citizens, civil police, and military personnel. These murders evoke no interest, let alone protest, from the Israeli-Jewish public.

The worthlessness attached to Palestinian life was put vividly on display during the Great March of Return in Gaza. A UN Commission of Inquiry found that “demonstrators who were hundreds of meters away from the Israeli forces and visibly engaged in civilian activities were intentionally shot. Journalists and health workers who were clearly marked as such were shot, as were children, women, and persons with disabilities”; it also found “reasonable grounds to believe that the Israeli security forces killed and maimed Palestinian demonstrators who did not pose an imminent threat of death or serious injury to others when they were shot.” Israel’s former Defense Minister, Avigdor Lieberman, declared during the protracted killing spree, “Israeli soldiers did what was necessary. I think all our soldiers deserve a medal.”

The B’Tselem position paper and the reaction to it cast a tantalizing light on the on-going (or, more exactly, non-going) proceedings at the International Criminal Court. The point currently being adjudicated in the ICC is whether “Palestine” constitutes a state. (Only a state can file a complaint with the Court.) The B’Tselem paper correctly asserts that “the PA is still subordinate to Israel and can only exercise its limited power with Israel’s consent,” and that Israel retains over Palestinians “control of immigration, the population registry, planning and land policies, water, communication infrastructure, import and export, and military control over land, sea, and air space.”

A lawyer backing Jewish supremacy, Eugene Kontorovich, alleges, in opposition to the B’Tselem paper, that the Palestinians have their own government, which makes any talk of apartheid “inapplicable.” But obviously, they do not, which makes all talk of apartheid most applicable. Amusingly, distinguished lawyers from around the world submitted amicus briefs to the ICC arguing that the PA was impotent and therefore didn’t qualify as a state able to file a complaint. Now, in the face of B’Tselem’s position paper, these advocates for Jewish supremacy are forced to argue that Palestinians possess their own government so Israel can’t be an apartheid state!

On the other hand, amicus briefs by the Palestinian side argued that the PA exercised a gamut of robust powers and therefore did qualify as a state under international law. This, of course, was ludicrous. The better argument would have been that, if Palestine is not a state, that’s because Israel has been brutally denying Palestinians their internationally enshrined right to self-determination, and therefore the ICC should not reward Israel’s lawbreaking by denying the Palestinian complaint. In any event, a senior PA official, the corrupt Nabil Shaath, reacted to the B’Tselem paper by confidently asserting, “There is no country in the world that is clearer in its apartheid policies than Israel.” But if Israel is an apartheid state, what does that make him and his PA if not a collaborator (Bantustan) subagent of it?

As a practical-political matter, it is questionable whether denoting Israel an apartheid regime will advance the cause before the broad public. Apartheid in South Africa was extinguished three decades ago. The historical memory of most people is short. True, apartheid is a discrete crime under international law, but Israel has committed so many internationally recognized crimes, such as war crimes and crimes against humanity, that the addition of one more to the bill of indictment won’t make much difference.