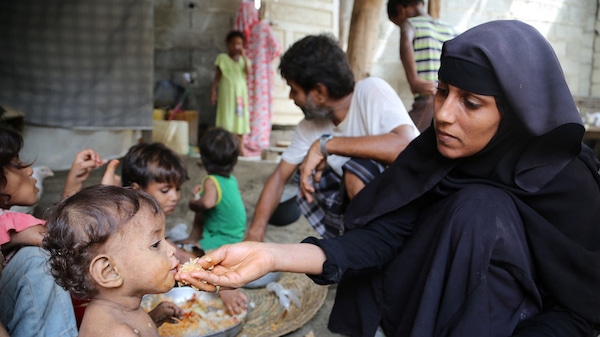 Director general of the United Nations Office for the Coordination of Humanitarian Affairs (OCHA), Mark Lowcock, warned in the Security Council on Thursday, January 14 that recent labeling of Houthis as a “foreign terrorist organization” by the Donald Trump administration would likely trigger a “famine on a scale we have not seen in 40 years.” He urged the U.S. to revoke the decision.

However, Deputy U.S. Ambassador to the United Nations Richard Mills rejected the appeal to revoke the decision, saying that the U.S. believes it to be the right decision in the right direction.

Lowcock warned that the move could cause massive hike in the prices of food Yemen which is already facing the “world’s largest humanitarian crisis of the century” caused by the war and blockade imposed on the country by the Saudi Arabia-led coalition which is backed by the U.S. He estimated that the prices of food could go up by 400% if the ban continues.

I told the Security Council today that Yemen is on the brink of a famine the likes of which the world has not seen in forty years.
Aid agencies believe that the US FTO designation of the Houthis will accelerate Yemen’s slide into a large-scale famine. https://t.co/l3yYgro9t6 pic.twitter.com/fNjPhXUOpZ

The move to designate Houthis or Ansar Allah as a foreign terrorist organization was announced by the outgoing Trump administration on January 10. According to the notification sent to the U.S. Congress the designation will take effect from January 19, the day the term of Donald Trump as president ends.

Lowcock reiterated the fact that around 50,000 Yemenis are already facing severe famine in the country and another 5 million are on the verge of it. The move will affect at least half of the 30 million people living in Yemen as the country imports 90% of its total food requirement.

Meanwhile, The International Committee of the Red Cross, the world’s leading relief agency, also warned in a statement issued on Thursday that the designation of Houthis as a terrorist organization will have adverse effects on its attempts to provide rescue and relief work among the civilians in the country.

The move will make it difficult for charity groups and international organizations to deal with the Houthis who administer the majority of the Yemeni population and control the capital, Sanaa. The move includes restrictions on international transactions which could hinder the flow of funds.

The decision has already been criticized by international organizations. Some of them have also urged the incoming president Joe Biden to revoke it once he assumes office on January 20.