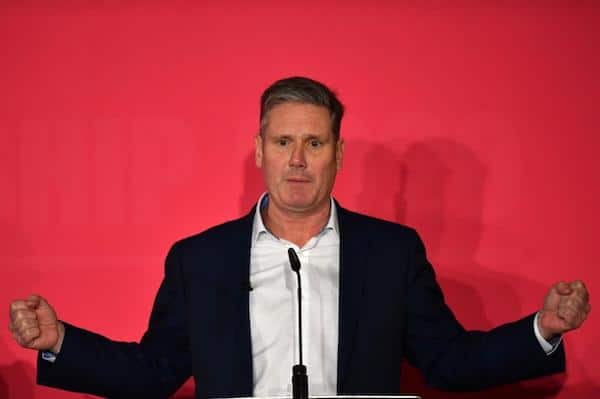 Keir Starmer, pictured at a party hustings event in Liverpool in January 2020 prior to his election as Labour leader (AFP)

Senior UK Labour Party figures have reacted with anger and dismay to the organisation’s decision to recruit an Israeli former military intelligence officer as one of its social media managers.

Assaf Kaplan, who served with the Israeli army’s signals intelligence and surveillance agency known as Unit 8200, was recruited last year to work in the office of the party leader, Keir Starmer.

While Unit 8200 is the counterpart of civilian-run agencies in the West such as the National Security Agency in the U.S. and the UK’s GCHQ, it has faced fierce criticism for its role in maintaining close surveillance of the Palestinian civilian population.

A number of its own members and former members complain that the unit creates divisions within Palestinian society, is used for “political persecution” and to recruit informers, and prevents fair trials in military courts.

There is particular concern that Palestinians discovered to be gay as a result of Unit 8200’s pervasive telephone and digital surveillance are subsequently blackmailed.

Chris Mullin, who was a Labour MP for 23 years and served as a foreign office minister under Tony Blair, told Middle East Eye:

I am not sure if this is a good idea. Is he still working for the Israelis or for the Labour Party?

I believe most party members will be bewildered to say the least that despite all the social media talent available in our movement, the party has decided to recruit someone with a track record of working in an intelligence organization roundly condemned for its role in the abuse of the human rights of Palestinians.

It’s possible that there was an oversight and that his background was not thoroughly checked, but that would be worrying as well. Either way, the decision should be immediately reversed and he should be removed from his position.

Ghadir al-Shafie, the director of Aswat, the Haifa-based Palestinian Feminist Centre for Sexual and Gender Freedoms, told MEE that many Palestinians had been targeted by Unit 8200 because of their sexual orientation.

“The Labour Party’s decision to appoint a former Unit 8200 soldier as a social media specialist is beyond shameful,” said Shafie.

It is particularly disturbing for me, as a queer Palestinian, that the Labour Party chose to collaborate with Israeli soldiers who work to spy on and collect information about Palestinians to be used by the apartheid state for political persecution.

London Palestine Action, a Palestinian solidarity group based in the British capital, described the appointment as a “slap in the face,” saying Keir Starmer was offering “no anti-racist principles, just meek defence of the status quo”.

Labour has been in turmoil since its former leader Jeremy Corbyn was suspended last year over his reaction to a report by the UK’s equalities watchdog, the Equalities and Human Rights Commission (EHRC).

The report said the party had acted unlawfully in handling the complaints of antisemitism it had received since Corbyn was elected leader in 2015.

Starmer said Corbyn had “undermined” the EHRC report by saying that the scale of antisemitism in the party had been “dramatically overstated”.

Although Corbyn was reinstated as a party member in November, he has not been restored by Starmer as a Labour MP, meaning he currently sits in the House of Commons as an independent.

Kaplan was recruited at the end of last year and given the job title “social listening and media organising manager”.

In this role he is said to help the party track and analyse what is being said about it on social media, and respond to conversations about it. His military intelligence background appears to have been known to a relatively limited number of Labour officials.

Kaplan was introduced to party staff as someone whose most recent job had been for the Israeli Labor Party, where he was said to have been involved in a campaign “to get the Arab vote out”.

He has been working at Starmer’s office in parliament, and many staff at the party’s headquarters, which are outside parliament, appear to have been unaware of his military background until reports emerged on Tuesday.

Since then, Labour has refused to answer any of MEE’s questions about the appointment.

In particular, its press office has repeatedly declined to say whether the party was aware of Kaplan’s military intelligence background before he was hired.

One senior Labour MP said he suspected the party was now “scrambling to figure out how best to respond to this massive own goal”.

Everyone is now worried and walking around on eggshells.

Kaplan did not respond to requests for a comment. There is no evidence that he was involved in surveillance activities leading to blackmail while serving in military intelligence.

Unit 8200 is one of the Israeli army’s largest units, and thousands of young conscripts serve within its ranks at any one time. It is considered to be a highly prestigious posting.

It is never far from controversy, however. In 2014, 43 of its members and former members wrote to their commanders, and to Israeli Prime Minister Benjamin Netanyahu, complaining that electronic surveillance of Palestinians was widespread and was not targeted only at people suspected of involvement in violence.

In the letter, they complained that this espionage was ultimately counter-productive.

Other members of the unit wrote a counter-letter expressing their “shock” and “disgust” at the suggestion that they were involved in human rights violations.

However, a former soldier who served with Unit 8200 told MEE this week that its work included collecting compromising private information on Palestinian civilians in the West Bank and Gaza that could be used to pressure them to collaborate with Israel.

He said he had served for a year in a department that was eavesdropping on people’s conversations but had quit because of his concerns about its work.

“It is a dark system that has no limits. This tool has been used to keep the people oppressed in order that they don’t resist the occupation,” he said, speaking on condition of anonymity.

I believe that the Labour Party or any side that identifies itself as democratic and cares about human rights… has to ask questions before they give a job to someone who was part of a system that is promoting this policy against Palestinians.

Kaplan was hired at a time when Labour and the ruling Conservative Party have been attempting to build their technical skills in what has come to resemble a digital arms race.

Like elsewhere, the role of social media and data analysis has grown rapidly in political campaigning in the UK in recent years.

In 2014, less than two percent of advertising spending by UK political parties was directed to digital campaigns; by 2017 it had reached 43 percent and it has continued to expand ever since.

Labour has failed to win four elections in succession since 2010. Senior party managers believe they have fallen badly behind the Conservatives over the past three years and are anxious to build the party’s technical campaigning capacity as a matter of urgency.