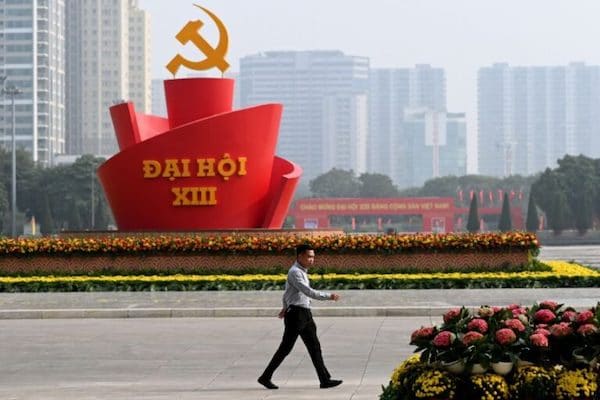 The 13th National Congress of the ruling Communist Party of Vietnam got under way in Hanoi on January 25, 2021

The 13th national congress of Vietnam’s ruling communist party, which began in Hanoi on Monday is an event of exceptional significance for the country’s internal politics and future trajectory of development, regional politics and the geopolitics of the Asia-Pacific. The party congress lasting nine days is expected to pick a new leadership team and approve the road map for national policies for the coming 5-year period and beyond.

The Communist Party of Vietnam is in a celebratory mood in its 70th anniversary this year. The fact that 1600 delegates can assemble in a large hall and confabulate face-to-face over the coming nine days bears testimony to Vietnam’s phenomenal success in curbing coronavirus. The country has reported just over 1,500 infections and 35 deaths in total.

In turn, this fantastic success has enabled the country’s economy to outstrip much of Asia in the past year. Vietnam expects an average annual gross domestic product growth of 7 percent over the next five years. Its agenda is to keep up the pace of industrialisation and modernisation and emerge as a “modernity-oriented industrialised country” (middle-income country) by 2030 and a “modern, industrialised country” (high-income country) by 2045.

Succinctly put, another profound test of socialist democracy is unfolding in Asia, second only to China’s. Being one of the fastest growing economies in the Asia-Pacific—in a good position to escape the COVID-19 economic trap–a linchpin of regional stability and potentially one of the world’s most important tech manufacturing hubs and the fastest-growing digital economy in Southeast Asia, Vietnam is emerging as a powerhouse within the ASEAN.

Political stability is one of the main factors that has helped Vietnam pursue its economic development policy. The eclipse of the pro-west bloc of business-friendly cadres led by former Prime Minister Dung at the 2016 Party Congress has made all the difference. Equally, Nguyen Phu Trong’s continuance as the Party chief, making him the longest-serving General Secretary since Le Duan, the leader who took control and led the country after the death of Ho Chi Minh, has provided enormous continuity.

As has happened in China, Vietnam’s economic success bolsters the communist party’s legitimacy. Trong’s biggest achievement has been that he not only astutely addressed the challenge of balancing Vietnam’s relations with China and the U.S. but could effectively leverage the Sino-American rivalry to his country’s advantage.

Fundamentally, Trong saw that the China-U.S. strategic competition held the risk of destabilising the regional geo-strategic and economic environment. It posed a major challenge for Vietnam, given that the country’s economy is very open and highly dependent on international trade and foreign investment. But the pathway Trong chose was one of expanding and deepening Hanoi’s engagement with both Beijing and Washington.

Put differently, Trong strove to minimise negative impact by taking advantage of opportunities, especially from China in trade and investment.

Economically, Vietnam has good relations with both China and the US. Clearly, any redirection of global trade can only work to Vietnam’s advantage. Simply put, the current trade dispute between Beijing and Washington has put Hanoi into an even better position, as multinationals now operate in Vietnam, including global tech giants like Apple and Samsung.

On the other hand, the disruption in China’s supply chains due to Trump’s trade war (and the pandemic) has prompted Beijing to create new supply chains, preferably from the Asian region. This has benefitted Vietnam. And, importantly, the Regional Comprehensive Economic Partnership (RCEP) under which a new matrix of Asan supply chains is in the making shortly will only reinforce this trend in the coming period.

Thus, China-Vietnam trade kept the momentum despite the constraints of the COVID-19 pandemic. To be sure, Vietnamese leaders are also acutely aware of China’s importance to Vietnam’s security and economic well-being. And the complicated and often tense maritime dispute in the South China Sea and complex issues surrounding the development of the Mekong river notwithstanding, China remains the largest source of materials and equipment for Vietnam’s thriving manufacturing industry.

China is today Vietnam’s largest trading partner and the latter is China’s sixth biggest trading partner. Interestingly, China understands and accepts that the U.S. influence on China-Vietnam relations is a fact of life–and, furthermore, Washington will keep interfering in maritime disputes in the South China Sea between Vietnam and China. There were anxious moments when the Trump Administration made a strong pitch to engage with Vietnam as a critical partner in its South China Sea strategy and to induct it as member of the so-called “Quad” to oppose China.

However, Trong steered clear of the American trap, and was wise enough to pursue a policy rooted in the belief that stability, rights and development are templates that are subtly chained together and are inseparable except at triggering disharmony. He kept up a sustained dialogue with the Chinese leadership and Beijing could sense that Vietnam had no intention of turning into a puppet of the Americans. This policy of strategic autonomy has raised the comfort level in China-Vietnam relations.

From the ideological perspective, the success of Vietnam’s journey of socialist development while on a steady reform path cannot but be of interest to China. It strengthens the fraternal bonds between the two communist parties. A commentary in the Global Times on January 24 observed that under the guidance of the Vietnamese communist leadership under Trong,

Vietnam will continue to maintain a stable and rapid development trend, deepen its reform and integrate into the world, fulfill the obligations of various trade agreements, and thus prepare itself for a higher status on the world stage… To develop socialist path that accords to each country’s national condition is a key bond between Beijing and Hanoi.

The commentary concluded with the hope that “The main leadership (under Trong) will surely continue to lead the Central Committee of the CPV to adhere to the established diplomatic policy of independence, multilateralism, and diversification.”