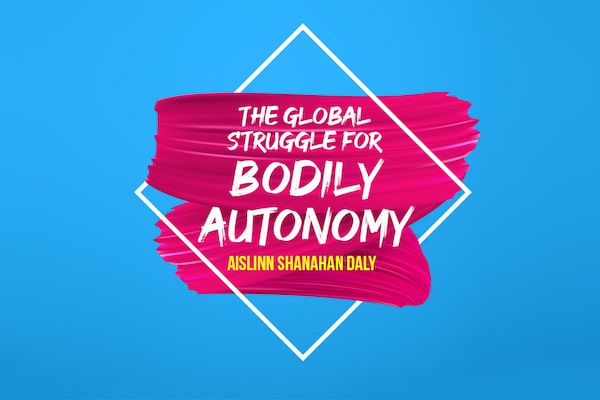 The Global Struggle for Bodily Autonomy

At Marxism 2020, Aislinn Shanahan Daly spoke about the global fight for bodily autonomy. Her speech, published here, looks at different ways bodily autonomy is denied in capitalist society, the role of social reproduction in the oppression of women, and the fight for our bodies globally.

If we go back to the city-state of ancient Sparta, there is evidence that eugenic practices were prevalent. But what is interesting here is the treatment of women regarding bodily autonomy. Women were expected to stay away from public life and to condition their bodies with exercise. Unlike other ancient societies such as in Athens, they did not marry until the age of 18-20. It is likely that this was because of a higher chance of a successful pregnancy. Women were passed from a husband who decided he had had enough children to other men, and even older husbands would be encouraged to let younger men impregnate their wives. In short, the role of Spartan women was to make babies.

The example of Sparta is an interesting precedent for the way in which people’s bodies have been controlled and utilized beyond their consent throughout history. The control of our bodies presupposes capitalism, but capitalism in turn has entrenched it.

The phrase bodily autonomy has become a progressive rallying point in contemporary times, primarily through struggles for abortion rights and the fight against attempts to roll back on those rights–notably in the U.S. under Trump and in Poland.

Essentially this is the Marxist theory of historical materialism in action: societies do not advance according to what is inherently good for us, or what improves the human condition. Societies are formed from the struggle between the wills of the ruling class to sustain the status quo, and the demands of ordinary people.

There is no shortage of recent examples of the ruling class attempting to maintain the status quo around bodily autonomy and the power imbalances in society. Take the Belfast rape trial of 2018. Overwhelming physical evidence and witness testimony against rugby players Paddy Jackson and Stuart Olding were dismissed. Degrading text messages sent by the defendants were shared with the court and later portrayed in the media as ‘boys being boys’.

In this case the victim followed the rules of the system; she immediately informed others of the assault, she was examined by a doctor, and she reported the rape to the police. Yet her perpetrators were acquitted while details about her underwear and levels of intoxication became fodder for the front pages.

Through the repeated incidence of victims of rape and sexual assault being punished for attempting to achieve justice, a message is sent by the state that you are not entitled to your body. You are not entitled to a basic boundary for sexual encounter. And we know the majority victims of rape and assault are women and trans people, and that this statistic becomes even more stratified when race is considered. We live in a society that teaches men in particular that they are sexually entitled to other people’s bodies. If we look again to the U.S., Trump and even Biden had public accusations of sexual assault that were essentially lost in the ether. These kinds of incidents are normalized in our society.

It was only in April 2017 that the European Court ruled the forced sterilisation of transgender individuals who wish to acquire legal gender recognition was deemed a breach of human rights. At this time, twenty-two countries in the European Union were still enforcing this policy. In Japan, in January 2019, the Supreme Court ruled that transgender individuals seeking gender recognition had to have their original reproductive organs removed before it could be granted, with the court stating that “the law is constitutional because it was meant to reduce confusion in families and society”. In this instance, the judiciary is attempting to preserve the traditional family structure and the normative role for human beings determined by their assigned gender at birth. The compulsory sterilisation of transgender people is an act of violence in which people are forced to undergo traumatic and life changing procedures to their bodies in order to achieve legal status.

Another example of insidious ways our bodily autonomy is infringed upon is the coercive administration of birth control. The state, philanthropic organisations, and pharmaceutical companies work in tandem to implement these veiled eugenic projects in the USA. Depo-provera, a contraceptive injection, was administered to Navajo women and Black women in the south of the USA before it was even approved by the Federal Drug Administration in the 1980s. Low income adolescents from Black and Latinx neighbourhoods in the United States were targeted for Norplant use, with philanthropic organisations even subsidising the provision of the contraceptive. In 2013, a report showed that Ethiopian migrants in Israel were being coerced into getting Depo-Provera injections with threats of not being permitted entry into Israel and being told that they wouldn’t be able to bear the pain of childbirth.

All of these examples show that the assault on our bodily autonomy takes place in many different forms in capitalist society. It is fundamental to the working of the system that people’s bodily autonomy is exploited. Social reproduction theory provides us with a useful framework in which to situate this argument.

Cinzia Aruzza, Nancy Fraser and Tithi Bhattacharya’s book Feminism for the 99% is a kind of manifesto of what a Marxist feminism might look like. They say:

in capitalist society, the organization of social reproduction rests on gender: it relies on gender roles and entrenches gender oppression. Social reproduction is therefore a feminist issue. But it is shot through at every point by the fault lines of class, race, sexuality, and nation. A feminism aimed at resolving the current crisis must understand social reproduction through a lens that also comprehends, and connects, all those axes of domination.

It is true that the profit-making incentives of capitalism simply couldn’t function without the unpaid labour of mostly women reproducing humanity. In this sense, not so different from Spartan society, the role of women in society is to reproduce. It is not to say that people cannot formally decide they do not want to have children, for example, but that it is still culturally enforced across the globe, with the exception of some tribal societies. This is one of the reasons why abortion becomes such a contentious issue for the far right, where the idea that someone would choose not to engage in a traditional family role is seen as an uprooting of the gendered division of social reproduction necessary to the continuation of capitalism.

Even if you look at the history of certain colonising strategies, like in Australia for example, there was an explicit intention to “dilute” the native population. In this sense women were coerced into being the vessels of social reproduction, and people’s bodies were infringed upon to uphold and reproduce the capitalist system.

Public socialised services such as childcare, healthcare, and education are also part of social reproduction. Increasingly these things are being privatised, forcing people to pay out of pocket for them or to start performing those roles in the family home. During the height of the COVID-19 pandemic there was an increased level of care work that parents had to perform, extra teaching duties with their children and caring for them around the clock, whilst often working a full time job from home. This work fell overwhelmingly on the shoulders of women.

If we look at labour militancy across the world, much of the significant strike action has taken place within women dominated sectors, such as the teacher’s strikes in Chicago, and even in Ireland the nurses and midwife’s strike in 2019. The current Debenhams workers’ strike is predominantly women. There is a militancy within many women-dominated sectors, sectors also by no coincidence characterised by the work of care. The majority of low paid jobs globally are done by women. So it isn’t just that there’s a gender pay gap for rich actors in Hollywood, but that the type of work women tend to do is systematically underpaid and under-valued.

How do we fight for it?

After abortion was legalized in the south of Ireland in 2018, the RTÉ Behaviour and Attitudes exit poll revealed that “choice” was the decisive issue–something many in the campaign had already discovered on the doorstep. A majority (62%) of all voters said the right to choose was the “most critical issue”. Despite the dominant framing of the debates and struggles leading up to the repeal of the 8th amendment, and even sections of the Together4Yes campaign arguing that the word choice would be a deterrent. Yet, we now know that choice won.

What I find interesting about the fact that choice won this referendum is that people were not merely voting to legalise a medical procedure. They were voting to increase the freedom of people to live their lives on their own terms. That the majority of people were won to a fundamental political belief in bodily autonomy is an achievement of the left and the many years of struggle preceding the referendum. While it can be exhausting to know that the government can take our hard won rights away at the click of a button, there is hope in our long history of resistance.

That resistance is present in the north of Ireland too, where opposition to abortion comes not just from the Catholic church but from the the leaders of unionism. The current Minister for Health, Robin Swann of the UUP, continues to obstruct the implementation of services even though abortion was decriminalised and women are being advised to travel for abortions against pandemic regulations. But it was sustained campaigning, including huge marches in Belfast led by women, which brought the issue into sharp focus and built enough pressure to force decriminalisation and it is those same people who are pushing once again for services.

Solidarity to our comrades in Poland and across the world fighting for bodily autonomy, and to our trans comrades who are fighting for equality and dignity. It is important to say that the growth of the far-right is a threat to the struggle for a just and equal society, so the fight against racism and fascism is inextricable from the fight for bodily autonomy. Many of our struggles are interconnected and when we recognise this, our movements become stronger.

We all deserve the right to choose our destinies. And when our society fundamentally steals that choice from us, it is only right and just that we fight like hell for a better world.

Our lives shall not be sweated from birth until life closes;
Hearts starve as well as bodies; give us bread, but give us roses.