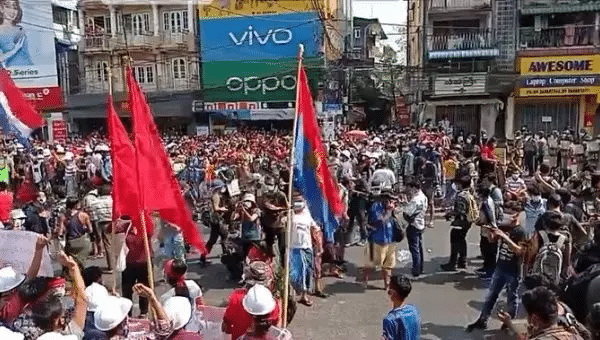 The protests have remained peaceful as demonstrators asked the police to support them on Saturday, February 6, 2021. | Photo: Twitter/ @MayWongCNA

Activists reported that demonstrators donated water, food, and face shields to the police as they ask them to be on their side, otherwise future generations will suffer. Myanmarese in Norway and Netherlands also protested against the coup carried on February 1, 2021.

Demonstrators took to the streets in Myanmar on Saturday to reject the military coup and demand the release of the elected leader Aung San Suu Kyi. This is the Junta shut down the Internet across the country.

In Yangon, Myanmar’s largest city, the police tried to impede access to the city center while the authorities blocked Facebook and Instagram to prevent people from mobilizing via social media.

Activists reported that demonstrators donated water and face shield to the police as they ask them to be on their side, otherwise future generations will suffer. Myanmarese in Norway and Netherlands also protested against the coup carried on February 1, 2021.

The protestors flashed the three-finger salute, from the saga Hunger Games. The salute has become a symbol against the military takeover. The demonstrations extended to Myanmar’s second city Mandalay. Although more protests are expected in the coming days, thus far it has remained peaceful. The military junta has not commented on the latest events yet.

#Myanmar | Hundreds of students and teachers at Dagon University of Yangon staged a rally against the military coup that rocked the Southeast Asian nation earliest this week. pic.twitter.com/ZEPKhp94XX