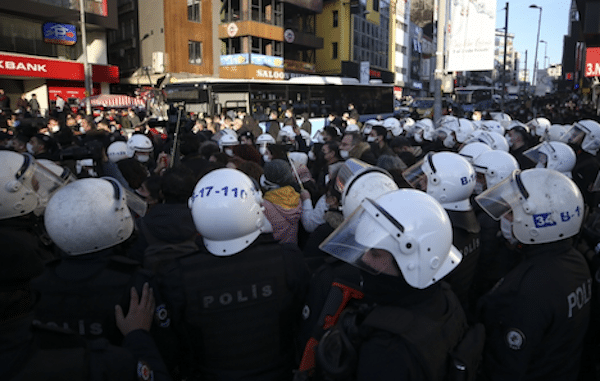 AS ANTI-GOVERNMENT protests continue to grow, revolutionary forces in Turkey warned today of the state’s attempts to break the backbone of their resistance.

Sixty-five people were detained in Istanbul last week after a press conference announcing the launch of a new opposition alliance, the United Fighting Forces (BMG).

Many of those hauled into custody will appear in court tomorrow. There have been allegations of torture during their four days of interrogation by security services.

The new alliance, which includes the Socialist Party of the Oppressed (ESP), Partizan, the Revolutionary Party and the Democratic Regions Party (DBP), has been hailed as a major step in uniting Turkey’s revolutionary forces against state oppression.

The government routinely accuses its opponents of terrorism, but in a statement the BMG said that “the only terrorist organisation in this country” is the ruling alliance between the ruling Justice & Development Party (AKP) headed by President Recep Tayyip Erdogan and the neofascist Nationalist Movement Party (MHP), its junior partner in government.

“Your attacks will not be able to stop us. We are coming to destroy your terrorist gang,” BMG promised.

ESP, founded in 2010 by jailed former Peoples’ Democratic Party (HDP) co-chair Figen Yuksekdag, has borne the brunt of the latest wave of government oppression with 48 of its leading members detained earlier this month.

After the latest wave of arrests at least 24 ESP members remain in custody, including co-chair Sahin Tumuklu; another eight are under house arrest.

We will overthrow fascism and gain political freedom.

And Revolutionary Party deputy leader Murat Pircan Yaratan told the Morning Star that the state fears unity between Turks and Kurds and wants to break a movement that takes its power from the streets.

“There is a pressure on the organisations that speak out,” he said, explaining that Turkey is faced with “a severe political and economic crisis.”

But, he added, Mr Erdogan is afraid of the huge protests that continue across Turkey, triggered by the appointment of a pro-Erdogan rector, Melih Bulu, at Istanbul’s prestigious Bogazici University in January.

Students and other protesters have been targeted by snipers and subjected to sexual assault at the hands of security services with more than 500 detained over the course of last week alone.

“We will not bow, we will not look down” has become the slogan of a movement the government has vowed to put down at all costs, fearing it will become “a new Gezi,” the 2013 wave of protests that nearly brought down the government.

Mr Erdogan insists the students are “terrorists” taking instructions from “those in the mountains.”