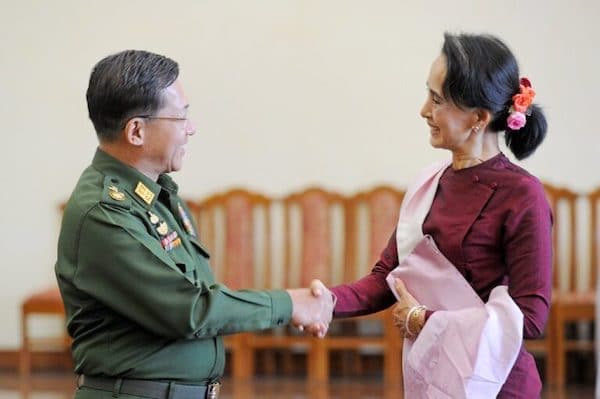 The Modi government made a strident call on February 1 that the “rule of law and the democratic process must be upheld” in Myanmar. The statement, following a prodding from Washington, was unabashedly intrusive, and, ironically, completely overlooking that human rights, rule of law, democratic pluralism, etc. are universal values that India also can (and should) be held accountable for. Lapping up the neocon prescriptions from Washington may not serve India’s interests, in general, and they are very specific to Myanmar.

The government failed to fathom the US’ motivations in riding the high horse of democracy so soon after the Capitol Riots in Washington, DC. Human rights issues come handy for Washington to rally allies at a juncture when its leadership of the transatlantic alliance is in drift and major European powers do not see eye to eye with its global strategies on Russia and China and mock at its nostalgia-laden slogan that “America is back.”

Alas, the government failed to consult the ASEAN despite Delhi’s refrain that it attributes “centrality” to that grouping.

The ASEAN Chair’s statement of Feb, 1 recalled the “purposes and the principles enshrined in the ASEAN Charter” which include respecting the principles of sovereignty, equality, territorial integrity, non-interference, consensus and unity in diversity.”

The ASEAN Chair’s statement of Feb, 1 recalled the “purposes and the principles enshrined in the ASEAN Charter.” Simply put, India chose to bandwagon with the US, Japan and Australia while the ASEAN and China took a differentiated stance. Geopolitics crept in. But the U.S. has since realised the folly and National Security Advisor Jake Sullivan scrambled to contact the ASEAN ambassadors in Washington.

How come Delhi goofed up? Primarily, it is due to a flawed understanding of the Myanmar situation. The Indian analysts increasingly view world developments through their China prism and began fancying that with the massive victory of Aung San Suu Kyi in the November election provided an opportunity for India to “gear up to implement a major strategy with Myanmar under its ‘Neighbourhood First’ policy… to bring Myanmar under the Indo-Pacific construct” so as to align that country “more with ‘like-minded’ countries… to stand firm against China… to make Myanmar a part of the Indo-Pacific policy… (and) steer Myanmar away from the Chinese grip.”

Such views betray a zero sum mindset borne out of blind Sinophobia. Whereas, the ground realities are much more complex. The point is, Beijing brilliantly succeeded over the years in building a close relationship of mutual trust and mutual respect with Suu Kyi, parallel to the nurture of links between the Chinese Communist Party and her party National League for Democracy.

Unlike the western narrative of Aung Suu Kyi as Myanmar’s democracy icon, Beijing regarded her as a pragmatic politician who never uttered remarks to the detriment of China-Myanmar ties, was manifestly eager to maintain good relations and consistently adopted a soft stance on the South China Sea issue.

Beijing was greatly impressed that although Suu Kyi wanted Western support, she was adamant about national sovereignty. Arguably, it was in sync with what China would like its neighbours to practice. Chinese President Xi Jinping received Suu Kyi seven times since 2015. 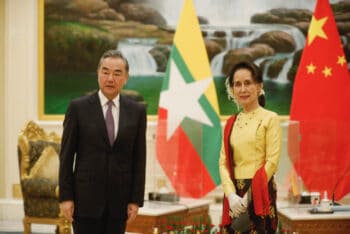 State Counselor Wang Yi visited Myanmar recently on Jan. 12, met Suu Kyi and expressed strong support for her government and conveyed a strong commitment that China wants to work with her during the second term.  And they agreed to push ahead with Belt and Road projects and lock in a five-year pact on trade and economic cooperation. Clearly, the prospect for the China-Myanmar Economic Corridor under Belt and Road Initiative has become uncertain now, as compared to a month ago.

In fact, the Chinese media reports already sound a word of caution that “Chinese companies operating in Myanmar need to watch out for contractual and default risks amid the current political upheaval… Government default is a major risk, especially for major and strategic projects in sectors including transportation and energy… But Chinese companies can seek international arbitration if they face illegal confiscation of their property.”

It is no secret that the Myanmar army marks a certain distance from China. Suffice to say, Myanmar developments present an extraordinary case study where Beijing silently feels distressed over the sudden eclipse of western style democracy in a neighbouring country. (See the Reuters analysis Myanmar coup does China more harm than good.)

Surely, the coup creates political baggage for China insofar as it cannot (and will not) take a position against the military, but also comes under compulsion to cover or provide protection for the military internationally. On the whole, this situation poses a major political and diplomatic liability for Beijing and cannot bring good news. Therefore, China prioritises that the concerned parties to solve their differences mutually, according to the constitution and within the legal framework, while maintaining peace and stability. Chinese expert opinion is that Suu Kyi’s political career is in jeopardy.

Of course, Suu Kyi made some serious errors, too. She heavily depended on people loyal to her personally, without bothering about their competence or integrity. It not only spawned corruption but also led to government failure to deliver, especially in job creation. Her leadership style was often dictatorial. She resorted to draconian laws to muzzle or jail critics. (See the Singapore-based Channel News Asia video titled Aung San Suu Kyi: A Fading Legacy dated October 22, 2020 on the eve of the November elections.)

Suu Kyi had no control over some major sectors of the national economy through two entities, Myanmar Economic Holdings Limited and Myanmar Economic Corporation as well as a network of domestic private business enterprises, known as “crony companies,” which generate revenue for the military and strengthen its autonomy.

Suu Kyi’s biggest mistake was in believing that she could, through her brand of nationalism, dismiss accusations of genocide directed against the Rohingya. In the process, Suu Kyi lost western support. From that point, she has been on borrowed time and the military barely hid its distaste for Suu Kyi.

To be sure, the military anticipated the impact and the reaction from the international community and took into consideration the Biden administration’s preoccupations with domestic issues. Myanmar doesn’t even figure in the top 10 priorities of Biden’s foreign policy. But the U.S. Congress is not going to tolerate a coup in Myanmar and will mount pressure on the Biden administration to punish the military by imposing sanctions, cutting aid or targeting the generals and their companies.

However, a reversal of the military takeover is not to be expected and the probability is that Washington may lose whatever little leverage it would have had in Naypyidaw. Washington is mulling over policy options.

But there may be a Plan B. Indeed, the former U.S. Ambassador to the United Nations Bill Richardson, who is no stranger to Myanmar, voiced the opinion last week that the time has come for the West to look beyond Suu Kyi for new faces among the opposition. One way is to mould a leadership that will be friendly to the US. There are signs that the western agencies are inciting the youth in Myanmar to stage protests, as had happened in Hong Kong and Thailand. The military has clamped down on Facebook and internet. Shades of colour revolution?

This is where Russia’s role merits attention. The struggle for influence in Myanmar has a geopolitical dimension, for obvious reasons. Since 2015, following the signing of a military cooperation agreement, Russian presence has increased, and, importantly, it coincides with the lengthening shadows of Russian presence in the Indian Ocean.

Russia has emerged as a major military partner for Myanmar. Russia operates a servicing centre in Myanmar.  The Russian Deputy Defense Minister Alexander Fomin told the media last month that Myanmar plays “a key role in maintaining peace and security in the region.”

It is entirely conceivable that Russia, which has great expertise in countering colour revolutions, shares intelligence with the Myanmar military. Over six hundred military officers from Myanmar are studying in the Russian military academies presently. Myanmar’s military chief Min Aung Hlaing visited Russia six times in the recent years, more than to any other country. 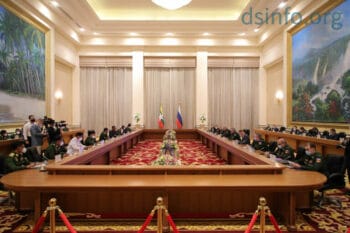 During the visit of Defence Minister Sergei Shoigu to Naypyidaw last month, the Russian media quoted Gen. Hlaing as saying, “Just like a loyal friend, Russia has always supported Myanmar in difficult moments, especially in the last four years.” An agreement was signed for supply of a batch of Russian missile and artillery air defense systems Pantsir-S1.

Tass reported that the “command of Myanmar’s armed forces has shown interest in other advanced weapon systems of Russian manufacture.” Shoigu has reportedly expressed interest to establish visits of Russian warships to Myanmar’s ports.

All things taken into consideration, we may expect China and Russia to provide a firewall for Myanmar to ward off western penetration, as is happening in Central Asia. (The UN Security Council statement avoids any reference to the military or a coup as such in Myanmar and lays emphasis on national reconciliation, with pointed reference to Suu Kyi’s release.)Russia shares China’s perception of Quad as a destabilising factor in regional security.

Clearly, India needs to keep the “big picture” in view. It will not be to India’s advantage to create misperceptions that it is bandwagoning with some neocon Anglo-American project for regime change in Myanmar. In regard of Myanmar’s stability, India too is a stakeholder and would have a convergence of interests with Russia and China.