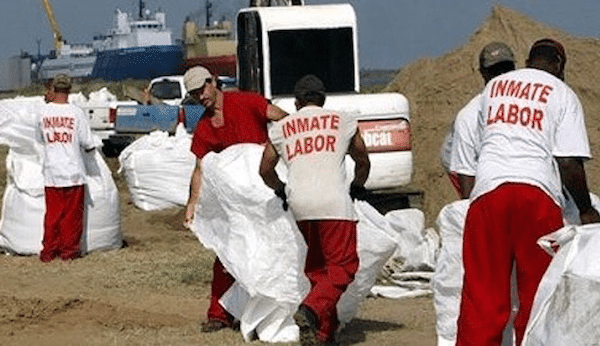 Forced labor of Uyghurs in China is questionable, but there is absolute proof that incarcerated people in this country are forced to work for little or no pay.

By any measure, the United States has the worst human rights record among the nations called democratic or developed or advanced or “free world” or any of the other labels that rich capitalist countries use to describe themselves. The U.S. has the worst health care system in that group, the worst benefits for workers, and the worst income inequality. It also has the dubious distinction of being the world’s biggest jailer, with some 2.3 million people behind bars. This country which treats its people so terribly is also the one most likely to project its evil doing on to others.

There is a method to the madness. When the United States claimed that Saddam Hussein or Bashar al-Assad used chemical weapons, or that Muammar Gaddafi gave his troops Viagra to commit rapes, there was public acceptance of interventions, invasions, and sanctions. People in this country like to think of themselves as virtuous, even as they approve of violations of human rights at home and abroad.

The latest target of hybrid warfare propaganda is the People’s Republic of China. The Uyghur people in the Xinjiang region are now being used in a futile and dangerous attempt to contain this country whose economic power and independent foreign policy stance challenges the United States and its allies.

The corporate media, politicians, NGOs, and supposed experts of dubious backgrounds relentlessly report that 1 million Uyghurs are imprisoned and that the state forces them to work. Yet there is no mention of the U.S. and its allies using Uyghur proxies in their campaign against Syria or of the jihadist terrorist attacks in China which followed. The government has established what they call technical training schools to end this activity, but that is all that can be established. There is no proof of anything that can be called a concentration camp or of forced labor, yet these stories are repeated endlessly.

In addition, the East Turkestan Islamic Movement (ETIM) was removed from the United States terrorist group list in 2020, not coincidentally at the same moment that hostility towards China was ramped up by the Trump administration. Biden is hardly different, repeating hostile tropes about China, continuing Trump policy but with slightly better vocabulary.

While the stories of forced labor in China are questionable, there is absolute proof that incarcerated people in this country are forced to work for little pay, ranging on average from .86 to $3.45 per day, and in five states they are paid nothing at all. They are even charged for being in prison. Their family members also suffer and must pay for video conversations which in some jurisdictions have replaced in-person visits. They are charged for those as well and these communications are not private, even when the incarcerated speak to their attorneys.

The human rights violations in this country that are well known and documented are seldom discussed. While members of Congress in the U.S. and parliamentarians around the world discuss boycotting Chinese cotton because of unproven allegations of Uyghur forced labor, they say nothing about the well documented instances of forced labor right here that are permitted under the 13th amendment to the constitution.

The hypocrisy would be stunning if it were not carried out so consistently. Joe Biden is just the latest president to claim that human rights abuses are rampant in other countries while ignoring gross violations taking place in his own. He already tried to fool the public when he announced a policy that the Department of Justice will no longer contract with privately run prisons. But he said nothing about the Department of Homeland Security, which has jurisdiction over private immigrant detention centers. In any case, most privately run prisons are under the jurisdiction of states, and not the federal government. While other countries are lectured, Americans get another bait and switch.

Neither Biden, members of congress, or the media who act like scribes should be allowed to use words like “genocide” without being challenged. The charges against China take on a life of their own, and anyone curious about sources of information is silenced or accused of being a genocide denier. The term implies that genocide is proven when it hasn’t been, and that anyone who questions the allegations is the liar.

These stories are amplified by NGOs funded by the U.S., allies like Australia, and weapons manufacturers who create “experts” who are then given undeserved credibility. Meanwhile incarcerated people here have no legal protections and no right to refuse the use of their labor. They may do dangerous work such as fighting California wildfires for a maximum of $5.12 per day, but are prohibited from doing the same work upon their release.

It is prudent to be skeptical whenever the United States government, its ally partners in crime, and their friends in corporate media make claims of human rights violations around the world. There is always an ulterior motive which gives the green light to aggression. Forced labor is just one example of American hypocrisy meant to promote war propaganda. One must always ask how the alleged crime compares to how this country treats its own people.