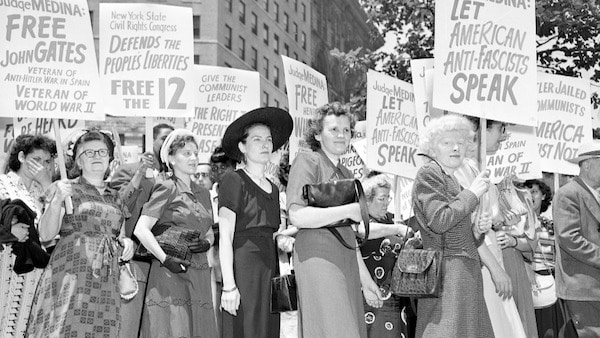 A mass demonstration is held in front of Federal Courthouse in New York City, June 6, 1949, to protest against the ‘Communist conspiracy’ show trial. The defendants, leaders of the Communist Party USA, were charged under the Smith Act. Joining the picket line at Foley Square are the wives of three of the twelve defendants, starting third from left, Lillian Gates, wife of Daily Worker editor John Gates; Fern Winston, wife of CPUSA leader Henry Winston; and Elizabeth Hall, wife of Ohio CP leader Gus Hall. | AP

A recent CNN article outrageously tried to put communists who were victims of U.S. government attacks in 1948 in the same boat with the criminal Trumpites who staged the attempted coup at the Capitol on Jan. 6.

The headline on the Feb. 3 article by Eliott C. McLaughlin read: “With coup label, Capitol rioters join communist party in plotting against USA, university project says.” The reportage was beyond just the “fake news” Trump has so often falsely attributed to CNN. This article represented the worst in sloppy journalism, with the author making no attempt to match any of his claims to reality. He simply regurgitates long-discredited Cold War lies.

McLaughlin displays an agonizing disregard for historical accuracy by regurgitating a claim made by the University of Illinois’ Cline Center for Advanced Social Research Coup D’état Project that claims the Communist Party, USA, like the Jan. 6 insurrectionists who stormed the Capitol, once plotted to overthrow the U.S. government.

In fact, the two have nothing in common.

One group–the CPUSA–has sought to protect and expand democracy, while the other–the January 6 insurrectionists–sought to violently overthrow our democracy.

What evidence does McLaughlin provide? How does he substantiate the claim that the Communist Party plotted against the U.S.? What scholarly books or journals are consulted?

The evidence is laughable. In all, the Coup D’état Project’s global database–his source–devotes three sentences to the CPUSA. 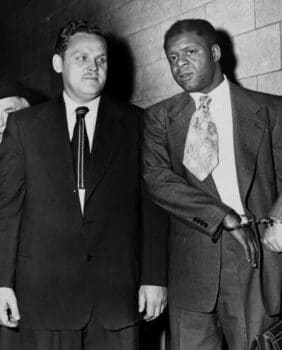 Gus Hall, left, and Henry Winston, two leaders in Communist party circles in the U.S., walk down a corridor of the Federal building in New York City, Oct. 13, 1949, to hear the final arguments in their nine-month trial. Hall is chairman of he Communist party in Ohio and Winston is the national organizing secretary. The two have been in jail between court sessions after being found in contempt of court by Judge Harold R. Medina. (AP Photo)

The database notes that the CPUSA’s leaders were “put on trial” under the provisions of the Smith Act, which is true.

The trials lasted “at least a decade.” This is also true.

Several CPUSA members were “convicted but few served jail time.” This is all correct.

However, the Coup D’état Project and McLaughlin only tell part of the story–the least important part at that. They omit the climax, the main point. Additionally, they leave out all of the context.

As all historians know, purposeful omission is falsification. The Coup D’état Project and McLaughlin have committed the cardinal sin by omitting the fact that the leaders of the CPUSA were never found guilty of any overt act.

During the Smith Act court hearings, the government’s so-called evidence consisted of rumor, hearsay, and fabrication, often perpetrated by paid FBI informants, like Harvey Matusow, who later recanted their testimony.

Their only other source of evidence were the speeches, articles, pamphlets, books, and reports–all widely disseminated–published by a legal political party whose members had contributed mightily to the struggle for social and economic justice; whose members sacrificed valiantly in the fight against fascism during World War II.

The Smith Act itself was later found to be unconstitutional; the Supreme Court ruled that defendants could only be prosecuted for their actions, not their beliefs.

They were only charged with and convicted of holding unpopular beliefs, Marxism-Leninism, of being Communists.

None of this is mentioned in McLaughlin’s article.

In short, the 11 leaders of the CPUSA were found guilty of violating an Act which itself was later found to be unconstitutional. Perhaps, McLaughlin could have provided CNN readers with this context.

This is an important point. McLaughlin does his readers a disservice by perpetuating the worst of the Cold War-Red Scare lies–lies that honest historians, such as Gerald Horne, have debunked. 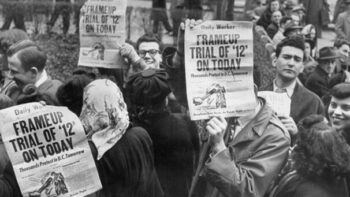 Demonstrators hold up copies of the Daily Worker, predecessor of People’s World, outside the Federal Courthouse in New York during the frame-up trial of Communist Party leaders. | People’s World Archives

He also unwittingly legitimizes “memory projects,” as historian Kristen Ghodsee termed it, that celebrate those who worked to constrain democratic liberties while simultaneously vilifying those who championed workers’ rights, African American equality, and peace, such as Elizabeth Gurley Flynn, Benjamin Davis, Jr., Henry Winston, and Gus Hall, all victims of the Smith Act frame-up.

Furthermore, it is now widely agreed that the CPUSA’s defense against the Smith Act was in fact a defense of the Bill of Rights that protected all Americans from government overreach into their private political beliefs and right of association, a foundational cornerstone of our Constitution.

Far from a coup attempt, the Communist Party’s defense against the Smith Act was part of the American radical democratic tradition–the complete opposite of the January 6 insurrection, which sought to overthrow our democracy.

The Coup D’état Project is not the only source on this subject and should not be presented as if it has the final word.

McLaughlin and CNN have a responsibility to provide accurate information and multiple sources. Unfortunately, they pass the buck.

This is not only bad journalism, it’s disingenuous. And in this case it actually is fake news.

CNN should retract this article and issue an apology to its readers and to the Communist Party.