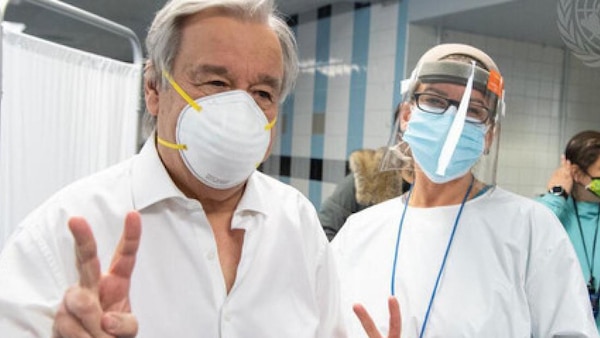 United Nations secretary general Antonio Guterres sharply criticized the “uneven and unfair” access to COVID-19 vaccinations across the world. Speaking at a high-level meeting of the UN security council on Wednesday, February 17, Guterres said that at a time when 130 countries have not received a single dose of the vaccine, only 10 countries have administered 75% of all COVID-19 vaccinations.

He argued that most people in conflict zones have been left behind and urged the G20 countries to take urgent steps to increase global production and distribution of the COVID-19 vaccines.

Guterres underlined the urgent need for a “global vaccination plan to bring together all those with the required power, expertise and production capacities” so that “everyone, everywhere, must be vaccinated as soon as possible.”

Progress on #COVID19 vaccinations has been wildly uneven & unfair.

The world urgently needs a Global Vaccination Plan to bring together all those with the required power, expertise & production capacities.

I am ready to mobilize the full @UN System in support of this effort. pic.twitter.com/YSp8JIBIx2

The novel coronavirus has infected more than 109 million people globally and killed over 2.4 million. A large number of those affected are in poor countries, who lack the resources to buy vaccines which are produced by manufacturers in advanced countries.

The World Health Organization’s (WHO) Covax program, which is an initiative to provide vaccines to poorer countries, has been struggling to meet its deadlines to start distribution due to lack of funds and support from the producers.

Dr. Seth Berkley, CEO at GAVI, the vaccine alliance responsible for Covax, also spoke at the meeting and highlighted the need to include a “safety net” to provide vaccines to high-risk populations. He said, “I ask that the UN SC reinforce this message so that available doses are distributed to ensure truly equitable access, in accordance with the humanitarian principles and in upholding state obligations towards populations within their territory,” UN News reported.

The WHO and the UN have been consistently criticizing “vaccine nationalism”  and “vaccine apartheid” wherein richer countries refuse to share vaccines with poorer countries or certain sections of their own populations. Israel, which has the highest percentage of vaccinations in the world, has been accused by activists of deliberately excluding Palestinians under its control.

Other members of the UN Security Council also expressed similar concerns. Speaking at the meeting, Chinese foreign minister Wang Yi criticized the growing “immunity divide” in the world and called on nations to come together to help people in poorer countries and in conflict zones. He urged countries to shun “vaccine nationalism” and said that China has already donated vaccines to 53 countries and collaborated with at least 10 countries for vaccine development. Yi also announced a preliminary contribution of 10 million doses of China’s vaccine to the Covax initiative.