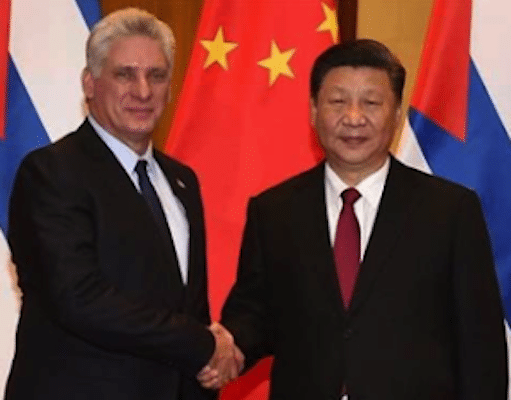 In the 1960s, the main forms of the Chinese assistance offered to Cuba were preferential trade and interest-free loans. From 1961 to 1965, China gave Cuba an interest-free loan of 60 million U.S. dollars. The two sides signed the China-Cuba Economic Cooperation Agreement, Trade and Payment Agreement, and Technology Cooperation Protocol. According to the agreement, the interest-free loan provided by China was used for Cuba to purchase complete sets of Chinese technical equipment. China purchased 1 million tons of raw sugar from Cuba and trained 200 Cuban technicians in China.

In order to support Cuba’s self-reliance, China actively recommended and dispatched agricultural experts and rice planting experts to Cuba to guide Cuban farmers in planting rice, and achieved good results. In order to break the radio blockade imposed by the United States against Cuba, the Chinese government promptly sent experts to escort and install high-power transmitters, transmission stations and power generation equipment donated to Cuba, so that Cuba’s Latin American News Agency can continue to maintain communication with the outside world.

In February, 1963, the Chinese government decided to use China’s trade surplus in 1962 and 1963 as a long-term interest-free loan to Cuba. In December 1964, the governments of China and Cuba signed the second trade and payment agreement (1965-1970) and the 1965 trade agreement. According to the agreement, China will provide Cuba with rice, soybeans, fat, canned meat, chemical products, machinery and equipment and other commodities for a long time, while Cuba will export raw sugar, nickel ore, copper ore, etc. to China. In bilateral trade, the Chinese government had taken care of Cuba in terms of food prices and trade balances with obvious aid nature.

Under the principles of equality and mutual benefit, emphasis on practical results, diversified forms, and common development, China had actively carried out economic and technological cooperation involving agriculture, energy, transportation, education and many other fields. In terms of specific forms of assistance, small-scale technical cooperation projects are the mainstay, with China providing demonstration equipment and sending experts to the recipient country to teach technology. At the same time, it also invited personnel from the recipient country to study and conduct technical training in China. In terms of financial assistance, in addition to providing interest-free loans, a new form of assistance emerged in the late 1990s.

China has invested heavily in Cuba to improve Cuba’s basic transportation facilities and power supply. As of 2004, China had agreed to invest US$500 million in Cuba’s industrial facilities; in this project, Cuban producers hold 51% of the shares, and the Chinese government’s Minmetals Corporation holds 49%. The project is covered by China Export Credit Insurance. China Petroleum & Chemical Corporation signed an agreement with Cuban state-owned oil company to cooperate in the development of petroleum resources. In early 2006, Cuba signed a contract with China to purchase 1,000 buses to improve transportation within the city and across provinces and cities. The Cuban government purchased 30,000 refrigerators from China to replace the old models. In mid 2006, Cuba purchased 100 railway locomotives from China for 130 million U.S. dollars. China and Cuba signed an agreement at the end of 2005 to cooperate in the development of biotechnology in three to five years. As of 2007, the two countries had a total of about 200 scientific and technological cooperation projects.

In summary, Cuba has sought aid from China for years. Cuba and China increased collaboration in telecommunications of Computerization and Cybersecurity after signing a memorandum of understanding in July, 2014. As a result, Cuban human resources in this field have received training in China, and cooperation between Chinese tech companies and their Cuban counterparts has increased over the past few years. In December 2019, the two countries held the first China-Cuba Internet Forum in Havana, hosted by the Cyberspace Administration of China and the Cuban Ministry of Communications, to share experiences in internet governance, network management, among other topics. Cuba is expected to continue strengthening participation in the Chinese Belt & Road Initiative because of the importance of China’s Digital Silk Road as a multilateral platform for promoting the economic and technological development of the participating countries.

China has participated with infrastructure and technical assistance in the process of computerization of the Cuban society.

In summary, it all depends on how much the Cuban government would like to reform and open up Cuban market economy. China is ready to help.(1)

China’s role has been in providing capital and technology as China often is willing to take risks despite economic uncertainty created by the ongoing U.S. economic embargo.(2)