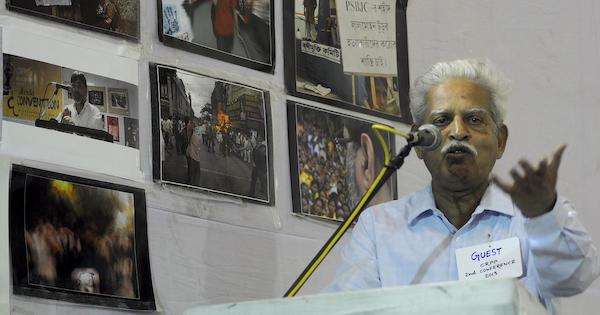 The Bombay High Court on Monday granted bail to 81-year-old activist Varavara Rao, who was arrested in connection with the Bhima Koregaon case, reported Live Law. Rao was given relief on medical grounds for a period of six months, following which he should “either surrender or apply for extension”. The court asked him to furnish a bail bond of Rs 50,000, according to Bar and Bench.

Rao was arrested in 2018 along with several other activists and booked under the stringent Unlawful Activities Prevention Act. The octogenarian, who suffers from multiple ailments, is currently recuperating at Mumbai’s Nanavati Hospital.

“We are of the opinion that this is a genuine and fit case to grant relief or else we will be abdicating our constitutional duties as protector of human rights and right to health covered under right to life of Article 21 of the Constitution,” a bench of Justices SS Shinde and Manish Pitale observed, according to Bar and Bench.

Rao was granted bail on the condition that he has to stay within the jurisdiction of the Special National Investigation Agency Court. “Rao has to attend trial whenever necessary, but can apply for exemption from physical appearance,” the court added. “He would not indulge in any activities or similar activities which led to the registering of the FIR.”

The court asked the activist to mark his presence with the nearest police station through video call on messaging platform WhatsApp. Besides, Rao has been directed not to issue any statements or speak to the media, Bar and Bench reported.

Rao’s daughter K Pavana said that the court’s decision was a big relief, adding that they will have to think about the bail condition asking Rao to stay in Mumbai, NDTV reported. “He [Rao] cannot afford to take a house on rent to stay there [in Mumbai],” the poet’s brother-in-law, N Venugopal, told the Hindustan Times.

Given the sensitivity of the case, we are not sure he would even get a house on rent in Mumbai. Since he doesn’t require hospitalization, he cannot be kept in hospital either.

Venugopal further said that the family was in process of completing the formalities and was expecting Rao to be released on Tuesday.

The activist was shifted to Nanavati Hospital, after the High Court on November 18 observed that he was “almost on his deathbed”. Since then, the court extended his stay in the hospital on December 15, December 21 and then on January 7. The NIA has, however, maintained that he was fit to be shifted back to Taloja Jail, where he was lodged before being hospitalised.

During the hearing, Justice Shinde rejected the NIA’s argument. “With all humility and human considerations, we are of the opinion that this is a fit case for allowing the relief,” he said.

Just as the court pronounced the verdict, Additional Solicitor General Anil Singh sought a stay on the order for three weeks. However, the High Court rejected this plea as well.

Several activists and academics have been accused of making inflammatory speeches at the Elgar Parishad conclave held at Shaniwar Wada in Pune on December 31, 2017, which the authorities claim triggered the violence at Bhima-Koregaon war memorial the next day. One person was killed and several others were injured in the incident.

The first chargesheet was filed by the Pune Police in November 2018, which ran to over 5,000 pages. It had named activists Sudhir Dhawale, Rona Wilson, Surendra Gadling, Shoma Sen, Mahesh Raut, all of whom were arrested in June 2018. The police had claimed that those arrested had “active links” with the banned Communist Party of India (Maoist), and accused activists of plotting to kill Prime Minister Narendra Modi.

A supplementary chargesheet was filed later in February 2019, against human rights activists Sudha Bharadwaj, Varavara Rao, Arun Ferreira, Vernon Gonsalves and banned Communist Party of India (Maoist) leader Ganapathy. The accused were charged with “waging war against the nation” and spreading the ideology of the CPI (Maoist), besides creating caste conflicts and hatred in the society.

The Centre transferred the case to the National Investigation Agency in January 2020 after the Bharatiya Janata Party government in Maharashtra, led by Devendra Fadnavis, was defeated.

Eight people who have been named in the NIA chargesheet for the January 2018 violence are former IIT professor Anand Teltumbde, his brother Milind Teltumbde, activist-journalist Gautam Navlakha, Delhi University associate professor Hany Babu, three members of the cultural group Kabir Kala Manch and Swamy. Of them, Milind Teltumbde has been named as an absconding accused and top operative of CPI (Maoist) in the chargesheet.