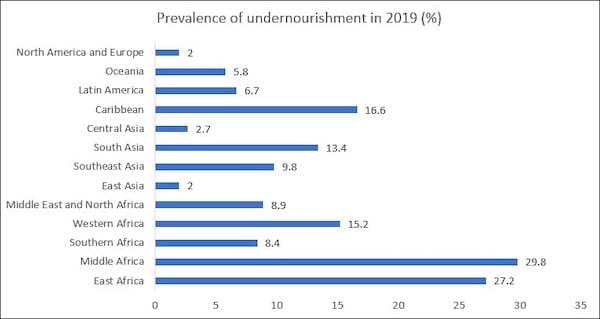 Source for Figures 1-3: The State of Food Insecurity and Nutrition in the World 2020, FAO and others

The world has been preoccupied with the COVID-19 pandemic, and this has also affected policymakers everywhere. There is much more recognition today of the terrible effects of underfunding public health over decades and how this affects the resilience of economies and societies. Yet this official preoccupation with addressing the spread of infectious disease appears to have had an unanticipated negative effect: less policy attention to concerns of food security and hunger. Poor nutrition is a major underlying factor affecting overall health conditions as well as resistance to disease, yet politicians and global leaders seem to have taken their eyes off that particular ball.

This is bad news, because globally, hunger is rising once again. (This is especially true in India, already the country with the largest number of hungry people in the world, but more on that later.) Even before the pandemic, in 2019, FAO estimates that there were 690 million people (9 per cent of the world’s population) who were chronically undernourished. This number is lower than previous estimates, but only because of data revisions for China and 12 other countries, which brought down the total numbers. The trend of hunger was still upwards: according to the FAO, the number of hungry people increased by 60 million between 2014 and 2019.

Figure 1: Sub Saharan Africa had the highest prevalence of undernourishment in 2019

Source for Figures 1-3: The State of Food Insecurity and Nutrition in the World 2020, FAO and others

Predictably, this hunger was concentrated in certain, dominantly low-income, regions. Figure 1 indicates that proportionately more people were likely to be undernourished in most parts of Sub-Saharan Africa, the Caribbean and South Asia, which are also among the poorer regions of the world. Not all developing regions were equally badly affected: East Asia shows rates similar to Europe and North America, while Southeast Asia also has a much lower incidence of hunger.

However, because of different population densities, the absolute numbers of hungry people show a different global distribution (Figure 2). Here, South Asia dominates, accounting for 37 per cent of the world’s undernourished population. Nearly three quarters of these reside in India, which with nearly 190 million, has the most people with undernutrition of all countries. (Other nutrition indicators in India are also very worrying: more than half of the women in the reproductive age 15-49 years are anaemic.) However, the numbers of hungry in some other regions are also substantial, with 118 million in East Africa and 65 million in Southeast Asia. 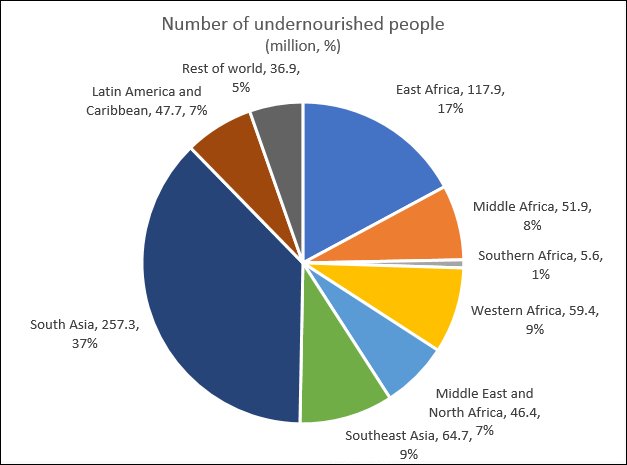 When slightly less stringent criteria for hunger are used, the picture changes further. The numbers so far are of severe undernutrition and extreme food insecurity. The FAO also considers the possibility of moderate food insecurity: the inability to afford a basic minimum nutritious diet, rather than just a minimum calorie intake. Inability to afford a healthy diet leads to all forms of malnutrition, including stunting, wasting, overweight and obesity (when cheaper foods provide more calories but are unhealthy).  According to this, the extent of food insecurity is much higher, as indicated as Figure 3. More than 2 billion people across the world, or around a quarter of the world’s population, were unable to afford a nutritious diet in 2019. And this was more widely spread, with evidence of such food insecurity in Europe and North America (88 million), Latin America (192 million) and Southeast Asia (123 million) and the MENA region (148 million). Of course, South Asia (692 million) and Sub Saharan Africa (605 million) continue to dominate the food-insecure population, accounting for two-thirds of the world’s total.

Figure 3: Food insecurity is widespread across much of the world 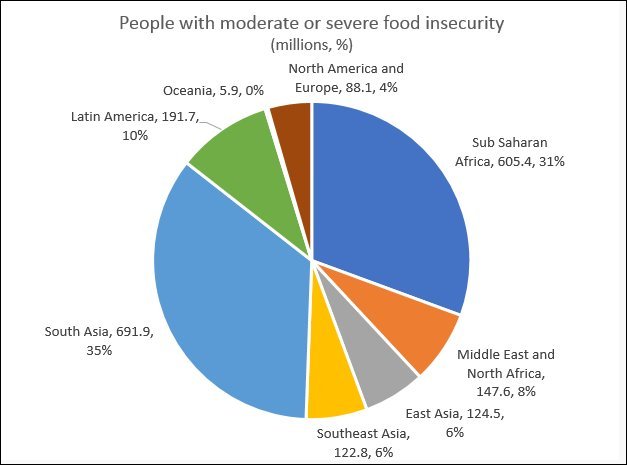 This was the picture before the pandemic. But we know that the pandemic had an extremely adverse impact on livelihoods and wage incomes, especially in the developing world. We also know that most of the hungry population were already concentrated in poor countries with dominantly informal employment, with very little in the form of automatic stabilisers and social protection that would have protected the income of the people at least to some extent.

The FAO estimated that anywhere between 83 and 13 million more people would have become severely undernourished during the pandemic so far. That is likely to be an underestimate, and not only because the projection was made in June 2020, when the duration of the pandemic was not known and the severe impact of the disease-control measures in the developing world (like lockdowns and restrictions on mobility and economic activity) was also probably underestimated. In the wake of such declines in employment and incomes, which have been widely documented, it is more than likely that a growing number of people especially in the developing world, would have had to reduce the quantity and quality of the food that they consume. Therefore, both extreme undernutrition and moderate food insecurity (inability to afford a nutritious diet) would have gone up over this period.

We do not yet have data on how much of an impact the pandemic has had. But the initial signs are extremely dire. We know that wage incomes and the returns to self-employment, which dominate across most of the developing world, have plummeted during this period. In many countries, nominal wages have declined, and the number of days work to be had for casual workers have also fallen. In such a situation, if food prices rise, that leads to extreme deprivation, because food becomes more expensive at a time when the money incomes of the household are falling.

Unfortunately, that is evidently what has already occurred in some of the countries that already had significant incidence of hunger. Figure 4 provides data on food price inflation in some developing countries that already showed significant undernutrition in 2019. (The data indicate change in food prices in January 2021 compared to January 2020.) 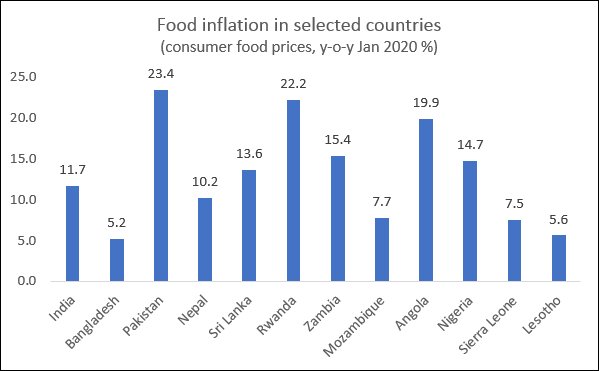 Some countries like Pakistan, Rwanda and Angola have experienced really sharp food price increases over the past year, in a period when money incomes of the poor—and of most of the population—must have declined. But even countries like India, where there is evidence of declining money wages and falling employment over this period, experienced substantial increase in food prices of nearly 12 per cent in 2020. Similarly, Nigeria, which is currently being forced into further austerity measures by the IMF, showed a high rate of food price inflation of 15 per cent.

Not all developing countries in Africa showed high rapid food inflation; in fact, food prices stayed broadly stable or declined slightly in some countries like Niger, Burkina Faso, Senegal, Botswana, Namibia and Central African Republic. But high food inflation in some of the countries that already had the most hungry people, is obviously a major concern. It’s time the international community put Zero Hunger firmly back on the policy agenda.

(This article was originally published in the Business Line on February 22, 2021)