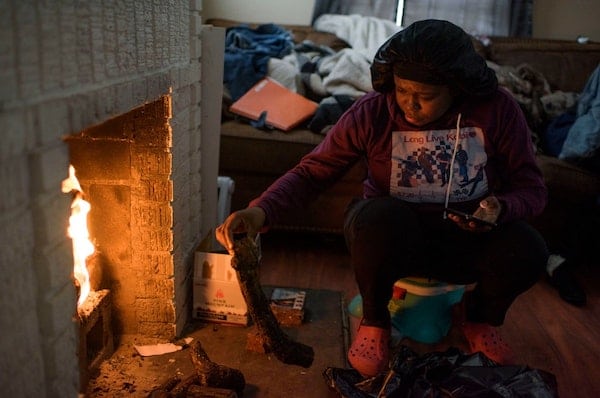 The terrible winter storm that has hit a huge swath of the United States has claimed at least 47 lives—though the true number is undoubtedly higher—30 of which were in Texas, according to The Washington Post. 17 of those died of exposure to the cold; one man was found with just a jacket and no shirt, shoes, or socks. A 12 year old boy died of cold overnight, in his bed. At least five have died from carbon monoxide poisoning, trying to heat their homes with grills or fireplaces, and 580 cases of CO poisoning have been reported in Houston alone.

These are not just natural tragedies, a consequence of living in a hostile and brutal world. They weren’t hit from above by a random meteorite; they lived in a society that didn’t care for everyone, disaster or no, and like every day in America, that led to deaths. Most crucially, Texas’ decision not to properly regulate its energy companies and require them to winterize their equipment led to power failures, which led to all this, to people freezing in their homes. But the lack of planning by those in power isn’t just incompetence; it’s malicious. They considered the options—make a company spend money and save lives, or don’t do either of those things? They picked the latter. It’s an ideology that leads people to value pretending the market always works above human life, and then describes its brutality as simply “not nice.”

On Wednesday night I spoke to Jamie Hudgins, a Jacksonville resident whose parents live in Benbrook, a suburb of Fort Worth. Her father, Jim, is 78 and has chronic obstructive pulmonary disease (COPD) and congestive heart failure, she said. His heart’s “ejection fraction,” a measurement of how much blood the heart can pump out, is 35 percent. He relies on oxygen tanks during the day and a trilogy machine, a sort of non-invasive ventilator, to help him breathe at night. The Philips website describes their trilogy machine as having “a 3-hour internal battery and optional 3-hour detachable battery, you’ll have sufficient power for intra-hospital transports–with plenty of time for any delays or detours.” Unfortunately, six hours isn’t plenty of time to get through a days-long power outage.

Jamie said her mom, Melinda, told her the power went out around 4.30am on Monday. Her dad “stayed in bed all day … just trying to sleep, because he doesn’t get enough oxygen, he gets very cold very easily.” She told me her mom called the fire department, who told her they could fill up a spare oxygen canister if they had one—they didn’t—and the oxygen company, who said they were out of spares. After that, she said, “it was basically just a waiting game of like, when is the battery gonna run out.”

That time came at 4.30am on Tuesday, Jamie said. After that, her dad “became very winded” and was in “respiratory distress,” so her mom called 911 and he went to hospital. Jamie said her parents told her that the emergency room was “full of people in the exact same situation.” She expects to see a bill for the ambulance, but isn’t sure if he even ended up being admitted to the ER in the chaos—when she called to ask about him, he wasn’t in the system, she said. Thankfully, Jim and Melinda were able to go to Jamie’s aunt and uncle’s house in Arlington afterwards, and Jamie said that her dad was feeling better. Others won’t have been so lucky. The ER can only do so much if the life you return to on discharge is full of hazards.

The devastating effects of a crisis like this one are deepened and made permanent by the lack of a healthcare system. About five million Texans are uninsured, roughly 18 percent of the state’s residents, the highest rate in the country. In Houston alone, 1.4 million are uninsured. The state didn’t expand Medicaid under the ACA, meaning you can’t get it if you are ‘just’ very poor and don’t qualify in other ways, like through disability or pregnancy. (If you do qualify in one of those ways, you still have to be very poor.) You can get Medicaid if your child under 18 is also enrolled—but only if you make an absurdly low amount of money. For a single parent of one child, you can only earn $103 per month to qualify for Medicaid; that’s less than many people spend just on their cable or phone bill, let alone groceries or rent. (Imagine being the guy whose job it is to see an application from a single mother whose income is $104 a month and stamp a big red DENIED on the form.)

People who survived this storm but suffered things like frostbite, or were already food insecure and missed another meal because the grocery stores were bare, or missed needed care because hospitals lacked power or water pressure, or used less insulin or oxygen to get through the storm—those are health effects, and they won’t just go away when the weather turns. Every crisis that causes human suffering becomes worse and lasts longer when the people who go through it can’t see a doctor, afford medications, or get mental healthcare. The crisis fractures off into thousands of new problems, burrowing deep in lives and society, because we don’t provide everyone healthcare. What if you lost your job because you spent the day trying to make sure your mom didn’t freeze to death instead of clocking in? No insurance, no Medicaid, no subsidies for a shitty ACA plan. No help.

This is borne out by the experience of many of the Texans living through disaster right now, who recently survived another disaster. In 2017, Hurricane Harvey battered Southeast Texas, and more than 100 people died. But the physical and mental toll remained after the waters receded. A year after the storm, a third of Gulf Coast residents reported to the Kaiser Family Foundation their lives were still disrupted. The storm destroyed 500,000 cars, which people need to get to work, to earn money to live. One focus group participant told KFF: “I didn’t have a rig truck [so] I couldn’t go to work. Then I did try to file for unemployment and they said that I quit. The company said that I quit because I didn’t have a truck to come to work no more.” Exposure to mold and pollutants exacerbate existing conditions; 76 percent of immunosuppressed patients contacted in one study reported seeing or smelling mold in their house after the hurricane.

Mental health effects linger, too. One survey, conducted several months after the Hurricane and published in Public Health Reports, found post-traumatic stress symptoms affected approximately one-fifth of respondents. The most commonly cited symptom was being troubled by horrible memories of the hurricane. How many people will have the same terrifying memories of this experience, watching the battery on their oxygen tank go down or not knowing where they’ll get their next meal, let alone those whose family members have died? One Texas woman told The Texas Tribune this week: “One more historical event, and I’m going to develop PTSD.” The time, effort, and expense required to access mental healthcare, let alone the time off work and the stigma of receiving treatment—if she does develop PTSD, will she ever get treatment? The mourning itself is a healthcare crisis, and it’s going unaddressed.

The same ideology of bloody ignorance that led to the state’s power grid collapsing in the first place also gave us a country where access to mental healthcare is horribly difficult, even if you have insurance. It’s the same ideology that means the guy who lost his truck in Hurricane Harvey doesn’t get unemployment benefits. It’s the same ideology that says not everyone deserves to have any healthcare at all; that it’s fine if homeless people linger and starve under overpasses, or if people die for lack of insulin. It’s designed to be barer than the bare minimum, to keep you afraid of what could happen, working for a bad boss in case you lose your insurance or can’t make rent and end up living under the bridge. Death and suffering isn’t an accidental outcome or an oversight; it’s part of the plan.