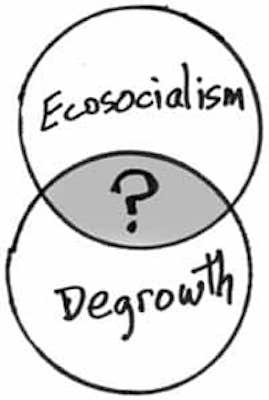 Ecosocialism versus degrowth: a false dilemma

In a recent article Michael Lowy ponders if the ecological left has to embrace the ecosocialist or the degrowth ‘flag’; a concern that is not totally new. Lowy is a French-Brazilian Marxist scholar and a prominent ecosocialist. Together with Joel Kovel, an American social scientist and psychiatrist, in 2001 he wrote An ecosocialist manifesto, a foundational document for several political organizations worldwide. Thus, entering into a discussion with Lowy is not a simple academic whim, but a demand that many politically-engaged people of the ecological left are wondering about.

Recently, members of an ecosocialist group within Catalonia en Comù, part of Unida Podemos (itself part of the centre-left coalition governing Spain), invited me to debate about the end of the economic growth paradigm. This hints that ecosocialists are interested in degrowth vision and proposals. On the other hand, during talks, speeches and discussions I have participated in, I also have noted that ecosocialist projects intrigue and inspire many degrowthers. Indeed, people on both sides feel they are sister movements. The following reflection is a first and humble contribution to making the two come closer.

In the above-quoted article, Lowy supports an alliance between ecosocialists and degrowthers, and I cannot but agree with this conclusion. However, before justifying this strategic endeavour, he feels the necessity to argue why degrowth falls short as a political vision. He narrows down his critical assessment to three issues. First, Lowy maintains, degrowth as a concept is inadequate to express clearly an alternative programme. Second, degrowthers and their discourses are not explicitly anti-capitalist. Finally, for him, degrowthers are not able to distinguish between those activities that need to be reduced and those that can keep flourishing.

Concerning the first critique, Lowy maintains that the word: “degrowth” is not convincing; it does not convey the progressive and emancipatory project of societal transformation that it is needed; this remark echoes with an old and unsolved debate for many. A discussion that Lowy should know, as well as those that have followed the last decade of degrowth debate. Sophisticated criticism has mobilized the American cognitive linguist and philosopher George Lakoff’s study about framing. Kate Rowarth, for example, suggested to degrowthers to learn from Lakoff that no one can win a political struggle or election if they keep using their opponent’s frame; and degrowth has in itself its antagonic vision: growth. Ecological economists supported the same argument in a more articulated way, suggesting that for this reason, degrowth backfires.

On the contrary, my intellectual companion Giorgos Kallis, back in 2015, gave nine clear reasons why degrowth is a compelling word. I want to complement them with one more. Looking at the search trends in Google (figure below), after ten years, degrowth keeps drawing higher levels of attention worldwide than ecosocialism. Perhaps ecosocialism can result clearer at a glance. Nevertheless, this does not mean that the populace will be immediately convinced. Indeed, the ecosocialist concept also has similar and possibly worse problems of framing, given the post-Soviet aversion to “socialism”, but this cannot mean we should abandon the term. The recent upsurge of popularity in the U.S. of “democratic socialism” suggests that the negative association of a term can be overcome.

Ecosocialists, as degrowthers, must keep explaining the actual content of their political dream, the label is not sufficient to explain it all. Our mission is un-accomplished; granted, in some contexts, ecosocialism will result in a more straightforward message, but in other degrowth could result more convincing. For the ecological left, more frames could be more effective than just one; and, using the most appropriate in different contexts and geographies is very probably the best strategy.

Noteworthy is that these different frames share core arguments and strategies. So let me move to Lowy’s second criticism, the supposed discrepancy between ecosocialists and degrowthers about capitalism. According to Lowy, degrowthers are not sufficiently or explicitly anti-capitalist. I cannot deny that not all degrowthers self-define as anti-capitalists and that for some of them stating it is not a priority. However, as Kallis already clarified, degrowth scholars are increasingly grounding their research and policies in a critique of capital forces and relations. Furthermore, Dennis and Schmelzer have shown that degrowthers widely share the belief that a degrowth society is incompatible with capitalism. And Stefania Barca has delineated how articulating ‘degrowth and labour politics toward an ecological class consciousness’ is the way forward for an ecosocialist degrowth society.

To these arguments, I want to add an observation. In their 2001 ecosocialist manifesto, Lowy and Kovel affirmed that in order to solve the ecological problem, it is necessary to set limits upon accumulation. They go on clarifying that this is not possible while capitalism keeps ruling the world. Indeed, as they and other prominent ecosocialists affirm, capitalism needs to grow or die. This effective slogan is probably the most explicit anti-capitalist sentence written in the ecosocialist manifesto, and I can maintain that most of the degrowthers would undersign this statement without hesitation –even more in pandemic times, when the existing capitalist system seems to be predicated upon the slogan: we (the capitalists) growth and you die! Indeed, it is ever-more evident that inequality is increasing dramatically during this period. If these observations are accurate, then degrowthers and ecosocialists agree more than disagree, and together with many others in the ecological left camp, share the same common sense: a healthy ecological and social system beyond the pandemic is not compatible with capitalism.

Lowy’s last criticism is that degrowthers cannot differentiate between the quantitative and the qualitative characteristics of growth. At first sight, it seems a step back to the lively discussion in the 1980s about the difference between growth and development. However, I am sure that Lowy and other ecosocialists are well aware of the critical assessment many Latin America thinkers have done of development and its colonial legacy (see here and here, for example). So, I will interpret this criticism in a more general term: it is essential to be selective about growth, and clarify what sectors need to grow and which need to degrow or even disappear. Nothing new under the sun, I could say. Peter Victor in 2012, when he was developing no-growth scenarios for facing the threat of climate change, discussed the selective growth scenario showing its modest and short-term effects for mitigating climate change. Serge Latouche, in his 2009 book Farewell to growth, argued that the decision about selective degrowth cannot be left to market forces. And Kallis explained that growth is a complex and integrated process, and thus it is mistaken to think in terms of what has to increase and what has to decrease.

It is an error to use degrowth as synonymous of decrease (as Timothée Parrique discussed extensively), and to think that what is considered ‘good’ things (hospitals, renewable energy, bicycles, etc.) need to increase without limits as the growth imaginary commands. Those that perpetuate this logic, as Lowy seems to do, stay in the growth camp. Doing so, Lowy did not follow his suggestion of paying more attention to a qualitative transformation.

In an ecosocialist society, orienting production towards more hospitals and public transport, as Lowy suggests, does not imply overcoming the growth logic and its predicaments. A degrowth society, with a healthier lifestyle and more ecological care, probably would not need so many more hospitals. Indeed, as Luzzati and colleagues found, the increase in per-capita income correlates significantly with the increase in cancer morbidity and mortality. In a degrowth society, people would fly very much less, and this could help to diminish the speed of pandemic contagions. Agro-ecological systems will encroach fewer habitats; both these qualitative changes in societal arrangement could imply less necessity to increase the number of intensive care units.

On the other hand, increasing more and more of a ‘good thing’ such as bikes in a city is not entirely positive: as in the case of Amsterdam, where walkers felt lack of space because of the enormous number of bikes in public spaces; or China (see image below), where tens of thousands of bike have been dumped because the growth-led prospect of the shared bike in cities resulted socially and ecologically problematic, the city counsellor decided to cap bike growth and regulate the share sectors. In sum, the idea of selective (de)growth does not help to unlearn the growth logic that still persists amongst many in the ecological left camp. What is needed is, indeed, a qualitative change in our mind, in our logic and our performative acts. 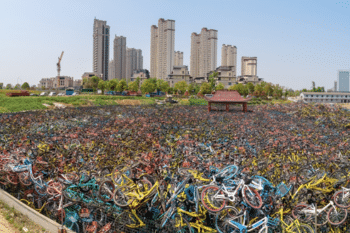 Ecosocialists and degrowthers are less far apart than Lowy’s article hints. Both visions are moving forward along the same path, learning from each other in the process. Discussing some thesis or policies that one or the other is proposing will help to improve and clarify their visions, and make them less questionable at the eyes of the sceptics and indifferent people. A meaningful dialogue will help us to make our arguments and practices widely commonsensical. Ecological leftists have not to decide which is the best and the most comprehensive discourse between ecosocialism and degrowth. These visions, I tried to argue above, indeed share core arguments, and both contribute to building persuasive discourse and performative actions.

On the contrary, creating a false dilemma is not very useful for our everyday struggles. In 2015, with some colleagues, we suggested exploring the redundancy of six different frameworks (Degrowth, Sustainable Community Movement Organizations, Territorialism, Commons, Social Resilience and Direct Social Actions) for relaunching more robust and comprehensive initiatives against the continuous expansion of capitalism and environmental injustices. We concluded that fostering redundancy more than nuance should motivate the promoters of these approaches if the general aim is to effectively relaunch robust and less aleatory alternatives to capitalism. In other words, we call for focusing on the consolidation of what all these approaches have in common, not just what they diverge on. This suggestion is also valid for ecosocialists and degrowthers.

It is undoubtedly crucial that both ecosocialists and degrowthers continue refining their discourses, practices and policies for advancing toward an ecologically-sound and socially-fair world free from patriarchal, racial and colonial legacy. Nevertheless, it is equally important that they map the redundancies of their views to improve the effectiveness of their shared struggle at various scales.

Giacomo D’Alisa is a FCT postdoctoral researcher at the Centre for Social Studies of the University of Coimbra, Portugal, where is part of the Ecology and Society Working Group. D’Alisa is founding member of the Research & Degrowth collective in Barcelona, Spain.