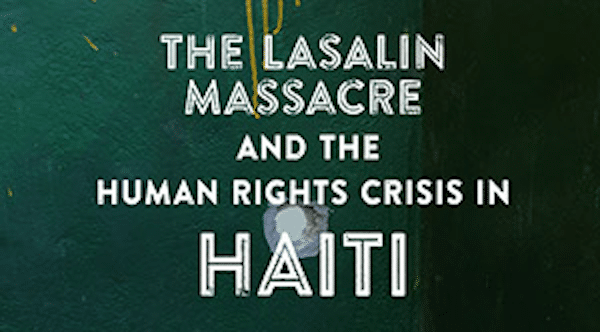 The Lasalin Massacre and the Human Rights Crisis in Haiti

Haiti Action Committee together with the National Lawyers Guild [NLG] is releasing a new report, The Lasalin Massacre and the Human Rights Crisis in Haiti, about the November 2018 massacre in the neighborhood of Lasalin, Port-au-Prince. The report also provides evidence of other subsequent massacres and human rights violations facilitated and supported by the government of Jovenel Moise and his ruling PHTK party.

The report is co-authored by Judith Mirkinson, President of the San Francisco chapter of the NLG, and Seth Donnelly, a member of Haiti Action Committee. Other members of the team include Margaret Prescod, an investigative journalist based in Los Angeles and producer of the Sojourner Truth radio program nationally syndicated on Pacifica, as well as Ramiro Funez, assistant producer of the Sojourner Truth program.

On April 1, 2019 our team went to Lasalin and interviewed survivors and eye-witnesses of the November massacre. The report demonstrates that the Lasalin massacre—rather than simply an example of “gang violence” as portrayed by the Haitian government and some US media sources—was in fact an attack facilitated by government officials and directly conducted by Haitian National Police [HNP] officers working closely with paramilitary elements logistically supported by the PHTK. Lasalin was targeted because it is a base of protests and opposition against the Moise government. Perpetrators of the massacre destroyed homes, burned people alive, hacked people to death, fed body parts to pigs and dogs, and raped women. People of all ages, including a 10-month-old child, were systematically butchered.

The report examines how the US government has continued to diplomatically and economically support the Moise government, despite clear evidence of its human rights violations. US support for the Moise government includes millions of US tax dollars to fund and train the HNP, despite its well-documented participation in brutality, killings of unarmed protesters, arbitrary arrests, torture, extrajudicial killings, and massacres such as the Lasalin massacre. The police and Moise government have also been politically, economically, and logistically supported by the United Nations occupation forces in Haiti, MINUJUSTH. The report concludes:

As the toll mounts from the atrocities committed in Lasalin, it is time for both the United States and the United Nations to be held to task for their continued support of the repressive and illegitimate regime now in power in Haiti. The people of Haiti deserve the right to live without the daily threat of state-directed violence.