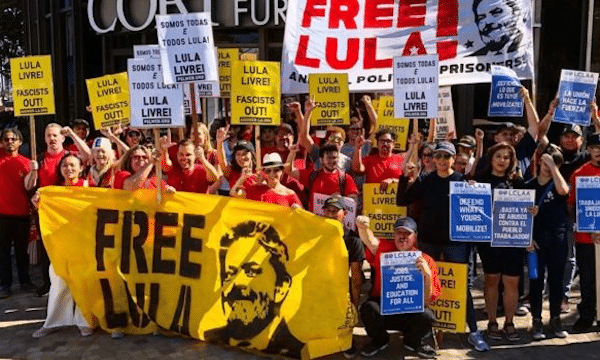 Lula’s supporters, including PSL members, at a demonstration demanding his freedom outside the Brazilian consulate in Los Angeles. Credit: Ben Huff

In a major victory for the left and progressive forces, all of the criminal convictions against Brazil’s former president Luiz Inácio Lula da Silva have been struck down by the Supreme Federal Tribunal, Brazil’s highest court. This restores the political rights of Brazil’s most popular political figure, including his right to run for president in 2022.

The possible return of Brazil, the world’s seventh largest economy and South America’s largest, to the progressive camp in Latin America is of great significance regionally and globally.

The SFT ruling was issued by a single member of the court, Justice Edson Fachin, who tossed the convictions after finding that the federal court in the city of Curitiba did not have jurisdiction to try the cases. He said they could be retried from scratch in the jurisdiction of Brasília, the capital. This could be a highly time-consuming process that even if successful may not be quick enough to block Lula from challenging the fascist incumbent president Jair Bolsonaro in 2022.

Since 2014, right-wing judicial and law enforcement authorities in Curitiba functioned as the tip-of-the-spear in a politically motivated persecution of Lula. In order to stop him from running in 2018, they imprisoned Lula for alleged corruption just as he was set to win the presidential election by a landslide.

Fachin’s ruling confirms what has been known all along: The right-wing judicial machinery in Curitiba had no right to prosecute Lula. The scope of the Operation Car Wash investigations conducted in Curitiba was strictly limited to cases involving the state-owned Petrobras oil company. Lula’s defense team and his supporters vigorously pointed out from the beginning that Lula’s case did not meet that criteria.

Why did Fachin, one of the most consistent defenders of Operation Car Wash within the Supreme Federal Tribunal, concede such a victory for Lula?

Fachin’s ruling came just as the Supreme Federal Tribunal prepared to take up the charges that Operation Car Wash judge Sérgio Moro did not act with the impartiality required of a judge. Leaked private messages between Moro and prosecutors published by The Intercept in June 2019 revealed that they worked together to rig the trials and secure the conviction of Lula on political grounds. The scandal severely damaged the credibility of Moro, the prosecutors and Operation Car Wash as a whole.

If the SFT were to find that Moro was partial against Lula, not only the case against Lula but many others under the Operation Car Wash would be annulled. And more, much of the evidence obtained against Lula under legal authorizations granted by Moro would also become void, dashing any hopes of the right-wing of securing a conviction against Lula in a retrial.

In declaring that Moro had no jurisdiction over Lula’s case, Fachin argued that his decision rendered the debate over Moro’s partiality irrelevant and immediately moved to quash all 14 cases before the SFT related to the matter. In his calculus, granting Lula this victory would protect Moro and Operation Car Wash.

As it stands, Fachin’s move did not sit well with some of the other members of the Supreme Federal Tribunal. Justice Gilmar Mendes is pushing forward with the hearings on Moro overruling Fachin’s decision. The outcome of this internal conflict in Brazil’s highest court remains to be seen.

Lula, a former metalworker union leader, served two terms as president from 2003 to 2011. The Workers Party that he co-founded oversaw an historic period of economic growth and poverty reduction that lifted millions out of poverty. When he left office he enjoyed an approval rating in the mid-80s. Workers Party candidate Dilma Rouseff won the next two elections.

Having lost four elections in a row, Brazil’s traditional right-wing parties were in a panic. Unable to win at the ballot box, they turned to the country’s legal system to eject the left from office. “Operation Car Wash” was launched in 2014 as an investigation into money laundering. The investigation soon turned its sights toward the Workers Party and Lula, who was accused of corruption based on outrageously flimsy evidence.

Lula was in prison from April 2018 to November 2019. A global movement emerged demanding his freedom. As more evidence of the sham nature of the Operation Car Wash prosecution became public the pressure grew. This led to a breakthrough in court when a judge ordered his freedom, but did not clear him of the criminal convictions that prevented him from running for president. The restoration of his legal rights this week mark another victory for the movement to free Lula.

Much of the damage wreaked by Moro and Operation Car Wash cannot be undone. Lula was almost certain to win the 2018 election. His imprisonment made him ineligible to run and paved the way for Bolsonaro’s victory whose government unleashed a tidal wave of attacks on workers and oppressed people in the country. Bolsonaro’s Trump-style opposition to the most basic public-health measures to address the pandemic has led to over 270,000 deaths, the second highest in the world. He has taken aim at labor unions and the gains they have won for the working class. Police forces and vigilantes are murdering Black and Indigenous Brazilians in huge numbers. Bolsonaro has promoted vile, open bigotry and violence against LGBTQ people. His government facilitated the rapid acceleration of the destruction of the Amazon rainforest.

The political coup against Dilma Rousseff in 2016 and Lula’s imprisonment in 2018 were the most severe attacks on Brazilian democracy since the end of the military dictatorship in 1985. The consequences were severe for not only the Workers Party, but the entire Brazilian left. This week’s legal breakthrough is a major step in overcoming these setbacks and wresting the country from the grips of Brazil’s right-wing elites.