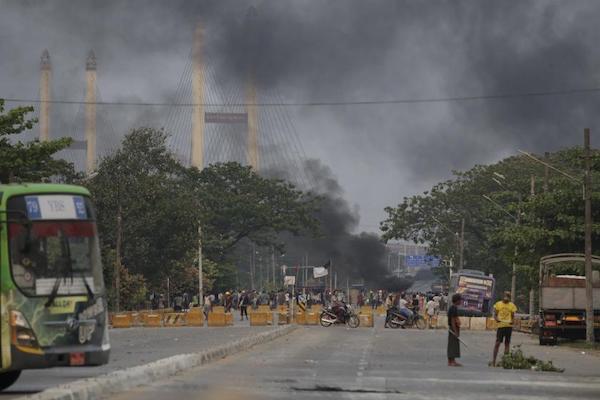 At least six people were killed on Tuesday following a wage dispute at a Chinese-owned shoe factory in Yangon’s Hlaing Tharyar Township after the owner called in the junta’s armed forces.

The workers had gone to the Xing Jia factory in Industrial Zone (1) to collect their wages, but conflict arose when they were not given the full payment they were owed, according to a Hlaing Tharyar resident from Daing Su ward who was familiar with the incident.

The owner, a Chinese national, then called the military and police, according to local sources.

“The soldiers and police came into the factory and surrounded it. The police slapped a girl who was the leader of the workers. When she hit back, they shot her,” the Hlaing Tharyar local told Myanmar Now.

The troops and police then arrested around 70 workers and loaded them onto two prisoner transport trucks. When people gathered to demand their release, the armed forces opened fire into the crowd, killing five more people, all men.

“The confrontation at the factory happened in the morning. When we gathered and went to demand the release of the arrested workers, it was about 2:30 in the afternoon,” the Hlaing Tharyar local said.

They used live ammunition to shoot us. We all had to run, but five were killed. We couldn’t bring their bodies back, so we had to drag them away and put them in ditches.

They were able to recover the body of one fallen worker at 9:00 p.m. on Tuesday, and some of the remaining bodies by 4:00 a.m. on Wednesday.

“We had to hide all night. There were six dead, we got four bodies back. They’re being kept at a Buddhist hall in the ward. We can’t take back two of the bodies, that of the girl shot in the factory and another man,” the local said.

At the time of reporting, he said he was on the run, along with 17 others, after being reported by another local for leading the protest. That individual is now also reportedly in hiding.

Injured protesters are being treated at Pun Hlaing hospital.

Myanmar Now is still gathering further information about the incident, and other reports of new fatal crackdowns in Hlaing Tharyar.

An official at the Hlaing Tharyar hospital said that no bodies or injured persons had been sent there on March 16 or 17.

“No one came in last night. The hospital is not far from places like Aung Zeya bridge or Mee Kwat market, so we’d know if there were something happening. The streets were relatively calm in the morning today,” another doctor from the same hospital said.

A local aid group reported that shots had been fired in Yay Oak Kan ward in Hlaing Tharyar, but further details were not known at the time of reporting.