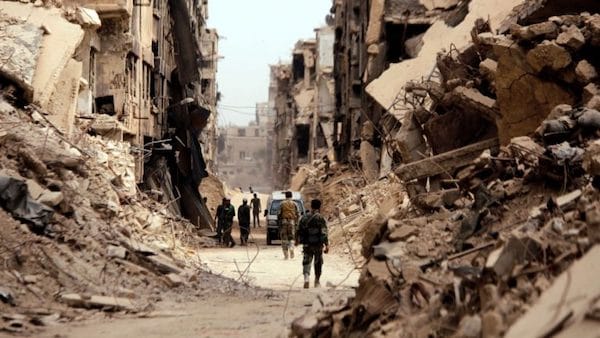 Syria in ruins after ten years of conflict (File photo)

In George Orwell’s novel Animal Farm, the ruling pigs led by Napoleon constantly rewrote history in order to justify and reinforce their own continuing power. The rewriting by the western powers of the history of the ongoing conflict in Syria leaps out of Orwell.

The joint statement issued by the foreign ministers of the U.S., UK, France, Germany and Italy last week to mark the tenth anniversary of the Syrian conflict begins with an outright falsehood by holding President Bashar al-Assad and “his backers” responsible for the horrific events in that country. It asserts that the five western powers “will not abandon” the Syrian people–till death do us part.

The historical reality is that Syria has been a theatre of the CIA’s activities ever since the inception of that agency in 1947. There is a whole history of CIA-sponsored “regime change” projects in Syria ranging from coup attempts and assassination plots to paramilitary strikes and funding and military training of anti-government forces.

It all began with the bloodless military coup in 1949 against then Syrian president Shukri al-Quwatli which was engineered by the CIA. As per the memoirs of Miles Copeland Jr, the CIA station chief in Damascus at that time–who later actually went on to write a fine book of high literary quality on the subject–the coup aimed at safeguarding Syria from the communist party and other radicals!

However, the CIA-installed colonel in power, Adib Shaishakli, was a bad choice. As Copeland put it, he was a “likeable rogue” alright who had not “to my certain knowledge, ever bowed down to a graven image. He had, however, committed sacrilege, blasphemy, murder, adultery and theft” to earn American support. He lasted for four years before overthrown by the Ba’ath Party and military officers. By 1955, CIA estimated that Syria was ripe for another military coup. By April 1956, a joint CIA-SIS (British Secret Intelligence Service) plot was implemented to mobilise right-wing Syrian military officers. But then, the Suez fiasco interrupted the project.

The CIA revived the project and plotted a second coup in 1957 under the codename Operation Wappen–again, to save Syria from communism–and even spent $3 million to bribe Syrian military officers. Tim Weiner, in his masterly 2008 book Legacy of Ashes: The History of the CIA, writes:

The president (Dwight Eisenhower) said he wanted to promote the idea of an Islamic jihad against godless communism. “We should do everything possible to stress the ‘holy war’ aspect,” he said at a 1957 White House meeting… (Secretary of state) Foster Dulles proposed a “secret task force,” under whose auspices the CIA would deliver American guns, money, and intelligence to King Saud of Saudi Arabia, King Hussein of Jordan, President Camille Chamoun of Lebanon, and President Nuri Said of Iraq.

These four mongrels were supposed to be our defence against communism and the extremes of Arab nationalism in the Middle East… If arms could not buy loyalty in the Middle East, the almighty dollar was still the CIA’s secret weapon. Cash for political warfare and power plays was always welcome. It could help an American imperium in Arab and Asian lands.

But, as it happened, some of those “right-wing” officers instead turned in the bribe money and revealed the CIA plot to the Syrian intelligence. Whereupon, 3 CIA officers were kicked out of the American embassy in Damascus, forcing  Washington to withdraw its ambassador in Damascus. With egg on its face, Washington promptly branded Syria as a “Soviet satellite”, deployed a fleet to the Mediterranean and incited Turkey to amass troops on the Syrian border. Dulles even contemplated a military strike under the so-called “Eisenhower Doctrine” as retaliation against Syria’s “provocations”. By the way, Britain’s MI6 was also working with the CIA in the failed coup attempt; the details came to light accidentally in 2003 among the papers of British Defence Minister Duncan Sandys many years after his death.

Now, coming down to current history, suffice to say that according to the WikiLeaks, since 2006, the U.S. had been funding London-based Syrian dissidents, and he CIA unit responsible for covert operations was deployed to Syria to mobilise rebel groups and ascertain potential supply routes. The U.S. is known to have trained at least 10000 rebel fighters at a cost of $1 billion annually since 2012. President Barack Obama reportedly admitted to a group of senators the operation to insert these CIA-trained rebel fighters into Syria.

The well-known American investigative journalist and political writer Seymour Hersh has written, based on inputs from intelligence officers, that CIA was already transferring arms from its Benghazi station (Libya) to Syria around that time. Make no mistake, Obama was the first world leader to openly call for the removal of Assad. That was in August 2011. Then CIA chief David Petraeus paid two unannounced visits to Turkey (in March and September 2012) to persuade Erdogan to step in as the flag carrier of the U.S.’ regime change project in Syria (under the rubric of “anti-terror fight”.)

In fact, the U.S.’ key allies in the Persian Gulf–Saudi Arabia, Qatar and the UAE–took the cue from Obama to loosen their purse strings to recruit, finance and equip thousands of jihadi fighters to be deployed to Syria. Equally, from the early stages of the conflict in Syria, major western intelligence agencies provided political, military and logistic support to the Syrian opposition and its associated rebel groups in Syria.

Curiously, the Russian intervention in Syria in September 2015 was in response to an emergent imminent defeat of the Syrian government forces at the hands of the jihadi fighters backed by the U.S.’ regional allies. Saudi Arabia withdrew from the arena only in 2017 after the tide of the war turned, thanks to the Russian intervention.

The joint statement issued last week by the U.S. and its NATO allies belongs to the world of fiction. In reality, there is Syrian blood in the hands of these NATO countries (including Turkey) and the U.S.’ Gulf allies. Look at the colossal destruction that the U.S. has caused: in the World Bank’s estimation, a cumulative total of $226 billion in gross domestic product was lost to Syria due to the war from 2011 to 2016 alone.

The Syrian conflict has been among the most tragic and destructive conflicts of our time. Hundreds of thousands of Syrians have died, half a nation has been displaced, and millions have been forced into desperate poverty and hunger. In the UNHRC estimation, after ten years of conflict, half of the Syrian population has been forced to flee home, 70% are living in poverty, 6.7 million Syrians have been internally displaced, over 13 million people need humanitarian assistance and protection, 12.4 million people suffer from lack of food (or 60% of the entire population), 5.9 million people are experiencing a housing emergency and nearly nine in 10 Syrians are living below the poverty threshold.

And, come to think of it, Syria used to have one of the highest levels of social formation in the entire Muslim Middle East. It used to be a middle income country until the U.S. decided to destabilise Syria. Ever since the late 1940s, the U.S.’ successive regime change projects were driven by geopolitical considerations. The agenda is unmistakeable: the U.S. has systematically destroyed the heart, soul and mind of “Arabism”–Iraq, Syria and Egypt–with a view to perpetuate the western domination of the Middle East.

The most disturbing aspect is that the U.S. is methodically facilitating a Balkanisation of Syria by helping the Kurdish groups aligned with it to carve out a semiautonomous enclave in the country’s northeast. In fact, the the Arab population in northeastern Syria resents being under the Kurds’ governance, and this may eventually turn into a new source of recruits for Islamic State. Meanwhile, Turkey seized the U.S.-Kurdish axis as alibi to occupy vast territories in northern Syria.

The sad part of the joint statement by the U.S. and its European allies is not only that it is rewriting history and spreading falsehood but conveys a sense of despair that there is no hope for light at the end of the tunnel in the Syrian conflict in a conceivable future.

The U.S. policy in Syria is opaque. It has oscillated between aiming to prevent a resurgence of IS, confronting Iran, pushing back against Russia, providing humanitarian aid, and even protecting Israel, while the crux of the matter is that successive U.S. administrations have failed to articulate a clear strategy and rationale for the U.S. military presence in Syria.