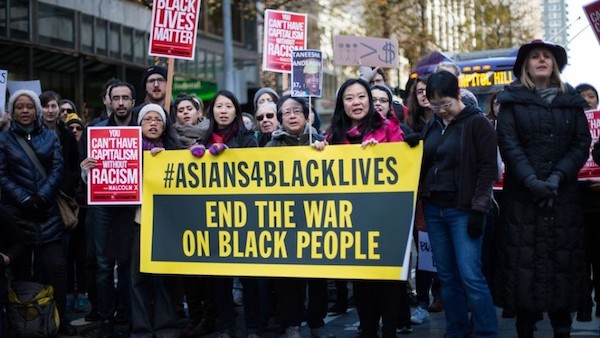 Joe Biden is no better than Trump in advocating de facto white supremacy with his foreign policy, and corporate media fan the flames of anti-Chinese racism.

Ever since a white Georgia man killed six Asian women and two others in Atlanta, the corporate media have jumped onto the “stop Asian hate” bandwagon as if they are innocent bystanders. It is easy to point fingers at a murdering local redneck and leave unexamined the media role in spreading hatred based on race and nationality.

Sinophobia in particular has been quite overt, with the corporate media following the dictates of U.S. foreign policy. When Donald Trump was president they repeated his every lie and insult, and supported every decision intended to thwart China. They may have sneered when he spoke of the “China virus” but they joined in telling lies about the beginnings of the Covid pandemic and ignored China’s successful response which resulted in fewer than 5,000 deaths while Americans have more than 500,000 and counting. When those narratives were combined with typical American racism it is little wonder that mass murder and hatred will take hold.

Joe Biden is no better than Trump in regard to advocating de facto white supremacy with his foreign policy. He continues all of Trump’s initiatives including any and all interference in the affairs of other countries, bombing Syria, imposing sanctions, keeping a dictator in place in Haiti, and taking vain yet dangerous actions to curb China’s influence around the world. Biden has even maintained Trump’s massive reduction in the number of refugees who may enter the U.S., a racist policy which could easily be reversed. Racism is the undercurrent of many decisions made in Washington.

But the rest of the world doesn’t accept bizarre American fantasies. They assert their own rights, as was seen when Secretary of State Antony Blinken met with Chinese counterparts in Anchorage, Alaska. Before the meeting began the U.S. openly demonized China by harping about Hong Kong, which belongs to China, and by promoting more false tales of Uyghur oppression. An anonymous official who obviously has administration ties wrote an anti-Chinese screed published by the Atlantic Council which posited that president Xi Jinping is an evil man who can and must be dispatched. As if to ensure that the meeting was a complete debacle, the U.S. sanctioned 24 Chinese officials before the talks even began.

Nothing positive can come from verbal attacks, especially when the Secretary of State used the press to witness his scolding of the Chinese. But he was not prepared for an enumeration of America’s sins and human rights abuses recounted by Chinese officials. Yang Jiechie correctly pointed out,

No one should be surprised about a rise in bigotry when Trump invoked cold war rhetoric against the Chinese communist party, words which apparently replaced “radical Islamic terrorism” as the go-to right wing talking point. United States senators complained about Chinese students and said they were all spies who shouldn’t be allowed to study science while in this country. Democrats predictably join in and speak of China as an adversary which must be kept under control. So-called progressives join in the hatefest just as eagerly as Trump and now Biden do.

The media in this country always use non-white people as the focus of suspicion. Black people are the group routinely dehumanized in a myriad of ways. All Muslims are called terrorists and are targets of profiling. The entire global south are labeled “shithole countries” whose citizens connive to arrive via “chain migration,” a process which Europeans used freely without being attacked.

Although if the state narrative calls for it even Europeans can be lumped into the undesirable category. Former Director of National Intelligence James Clapper famously said that Russians were “almost genetically given to co-opt, penetrate, gain favor…” The Russiagate fraud has made them an acceptable target for the foreseeable future.

But China looms large as the biggest target of white supremacist bias. Their crime is daring to have successfully remained a socialist state which has survived for more than 70 years and to be on the verge of surpassing the U.S. economically.

If the State Department and leading newspapers express animosity towards a country and its people, no one should be surprised by assaults and even murder against that group. In any case the biggest killers are all safely at the top of the pyramid, untouched and unbothered. But their words and deeds have consequences. When the consequence is death no one should be surprised or let the worst bigots off the hook because they meet inside the White House.