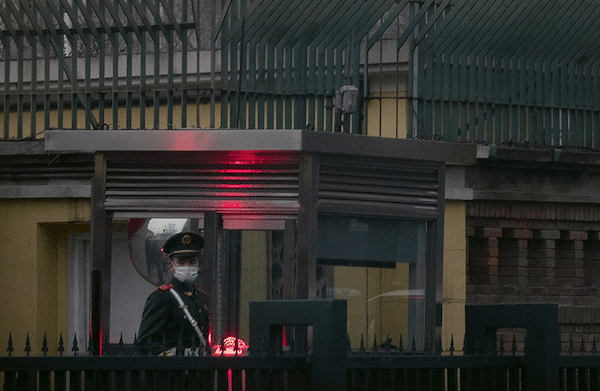 IAIN DUNCAN SMITH sees the Chinese sanctions applied to him and other politicians yesterday as a “badge of honour.”

But everyone committed to the cause of international peace should find the past week’s dramatic worsening of relations between the United States and its allies on one side and China on the other alarming.

The directing hand of the US was clear in the EU’s decision to impose sanctions on a number of officials in Xinjiang on Monday, the day US Secretary of State Antony Blinken arrived in Brussels following a frosty summit with the Chinese in Alaska. Britain and Canada quickly followed suit.

Chinese sanctions are a tit-for-tat response. More significant is the wave of anger in China directed at Western firms that have endorsed accusations that Chinese cotton is produced by forced labour, reflected in celebrities walking out of contracts with the likes of H&M and Nike, products from Western retailers removed from e-commerce sites and posts attacking them receiving billions of online shares.

Some here will dismiss this as nationalism, “whipped up” by China’s ruling Communist Party. But in the year following Black Lives Matter, when a public debate has resumed on the enduring legacy of colonialism, socialists should at least be conscious of the genuine resentment provoked in countries that were victims of European imperialism when they are lectured on human rights by Western governments.

The narrative that this is all in the past, that the West should “stop apologising” for empire, is mainly confined to the right.

But if imperialism is ongoing — if the systematic exploitation of poorer countries by “First World” capitalists continues, via control of resources and markets by giant transnationals, policed by a framework of institutions such as the International Monetary Fund and World Bank, “free trade” agreements restricting public ownership and state planning, and ultimately by the threat of force wielded overwhelmingly by the United States and Nato — then the left needs to be consistent in opposing it: and that means opposing a US-driven new cold war on China, because the “international rules-based system” which Blinken claims to defend is precisely this apparatus of imperialist control.

Otherwise the phrase would make no sense on the lips of a serial breacher of international law that murders foreign citizens by drone, invades countries at will and sponsors coups against elected governments like the US.

This is the context for the new cold war, whatever the specific excuses. Dominic Raab, cheerleader of 2019’s brutal Bolivian coup that prompted massacres of indigenous Aymara protesters, accuses China of the most serious attack on an ethnic group (the Uighurs) “since the second world war.”

It’s a startling claim, given the ethnic cleansing operation that drove a million Rohingya Muslims from Myanmar in 2017; the siege and collective punishment of the whole of Indian-ruled Kashmir by the Narendra Modi government since 2019, or its simultaneous campaign to drive millions of adivasis off their ancestral lands; the savage and ongoing repression of the Kurds by the Turkish government, involving mass arrests and bombed-out villages; the murderous occupation of Palestine.

Is this “whataboutery,” a distraction tactic? No, for two reasons. One is that we should always be aware of the selective outrage of our politicians and press. There is a ruling-class agenda behind the high-profile attacks on China, and the left should never take its priorities from the talking points of the capitalist media.

In the run-up to the Iraq war, Tony Benn refused to be drawn by right-wing pundit Janet Daley into criticism of Baghdad — not because he was any defender of Saddam Hussein, but because he knew what the purpose of it was.

Second, that agenda must lead us to treat the claims made about Xinjiang cautiously. Terms like “genocide” imply an attempt to wipe out the Uighur people or their culture.

These sit uncomfortably with the rise in the Uighur population in Xinjiang over the past decade, both absolutely and proportionately; and with the special legal status they are accorded in the Xinjiang Uighur autonomous region, granting greater rights to representation and Uighur-language education than in Chinese provinces.

These labels are not window-dressing: the Uighurs’ status in Xinjiang has been recognised since 1954, but the former provinces of Ningxia and Guangxi saw major protests by Han Chinese when they became autonomous regions for the Hui and Zhuang minorities respectively, because of anxiety that this would disadvantage the Han populations.

Claims of attacks on the Uighur language are undermined by its prominence in all public places in Xinjiang, besides its presence on every Chinese banknote. The governor of Xinjiang is a Uighur, Shohrat Zakir.

Detailed criticism of China’s re-education camps, which it says have been established to counter radicalisation by jihadist terror organisations such as the al-Qaida-linked East Turkestan Islamic Movement (Etim), is of course possible.

We know from Britain’s Prevent programme and the extraordinary extension of state control over mosques by Emmanuel Macron’s government in France that “de-radicalisation” programmes can be frankly Islamophobic.

China’s motive for the programme is plausible — Xinjiang would be the exception rather than the rule in central Asia if al-Qaida-type ideologies had not become more widespread in the past two decades, and the presence of Uighur separatists fighting for theocratic rule in the Syrian conflict is internationally attested.

Terrorist attacks by Etim and like-minded groups are a matter of record and, as is the case outside China, they often target Muslims — Juma Tayir, the imam of China’s oldest mosque, was murdered in such an attack in 2014. But this does not mean that socialists are obliged to agree with the Chinese response.

We should, though, be sceptical of partisan accounts of it. “Independent” reports such as this month’s by the Newsline Institute continue to rely heavily on the claims of eccentric Christian evangelist Adrian Zenz, who himself acknowledged when he first claimed over a million Uighurs had been imprisoned that he was speculating about the number.

Interviews with small numbers of dissidents and highly problematic statistical analysis are being used to level claims of mass incarceration and forced sterilisation that simply do not add up.

The latter claim is used in turn to justify the term “genocide” — a word whose definition denotes mass murder, though nobody has alleged that.

This relentless exaggeration is about more than sanctions. The growing tension between Washington and Beijing is the most dangerous issue in international politics.

The United States has developed and deployed small “tactical” nuclear weapons to its submarine fleet, ending decades of uneasy truce with the Russians on nuclear armaments.

Britain is also now significantly increasing the size of its nuclear arsenal for the first time since the cold war.

Russia and China will react. A new arms race looms. We are being primed to demonise the enemy.

Ordinary people the world over cannot afford this conflict. The pandemic has surely demonstrated the need for global co-operation, sharing of information and research. The same case is made on an even greater scale by the threat of climate chaos.

The new cold war with China is already seeing such projects cancelled in universities across the West. We are all the losers.

The left does not need to unite in defence of China. But it does need to unite against the new cold war. That means opposing sanctions on China as we oppose the hypocritical and punitive sanctions the US and its allies slap on other “enemy” countries, whether democratic socialist Venezuela or theocratic, repressive Iran. Our enemy is at home.