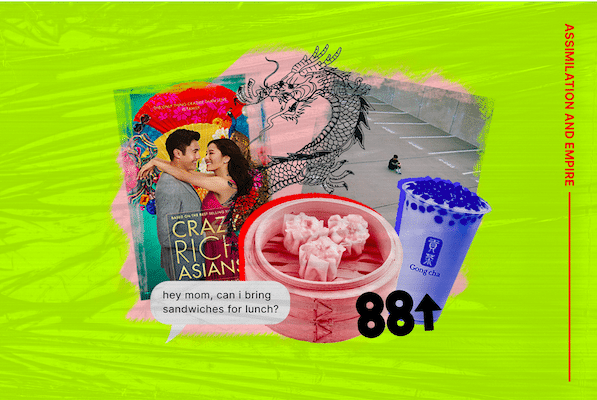 During the course of the COVID-19 pandemic, there has been an exponential increase in violence against Asian Americans: in New York alone, it’s been reported that violence rose by 1900%, fueled by anti-Asian sentiment. The “Stop AAPI Hate” database reported 2,808 incidents of anti-Asian discrimination between March 19 and December 31 of last year. However, the stereotype of Asian Americans as the “model minority”—as a group that has class privilege, upward mobility and values “hard work”—has restricted the ways we talk about this discrimination and injustice.

As someone from a liberal immigrant family, I grew up with my parents reminding me that being in so-called “North America” would be better for my life, that I would be able to achieve all of my dreams and succeed as an individual. Of course, the version of success they had in mind consisted of a six-figure salary and a higher socioeconomic class than when they first arrived in Canada. To this day, they still strongly believe in the myth of North American exceptionalism, which they consider in stark contrast to ingrained tropes of Asian authoritarianism: because “the government in China is too controlling—here, we have the freedom to succeed at anything as long as we work hard enough!” Yet this model minority mindset, which is all too common amongst immigrant families, foundationally undercuts the fight against both white supremacy and imperialism. The assimilation-bound ideology of the Asian American bourgeoisie must be unlearned if we are to be successful in dismantling the stronghold of U.S. imperialism in the Asia-Pacific.

Imagine my grief when I learned about the violence committed against Asian Americans, all due to the supposed connection between our race and COVID-19. How can so-called “North America” be the “land of opportunity” of my parents’ dreams for me when anti-Asian racism and white supremacy continue to run rampant? I spent most of my time in grade school and high school desperately trying to fit in with my white peers, shrugging off my Chinese heritage and distancing myself from those living in the “authoritarian state” of China, all in the hopes that my friends would see me as “Canadian,” as one of them. My parents desperately wanted me to assimilate as well, constantly reminding me that I would be able to succeed in the West and only in the West because the CPC is “controlling” and “authoritarian,” using immoral and undemocratic tactics to keep their citizens obedient and submissive.

For many Chinese immigrant families, distrust of socialism is born largely by former class character. For example, before the Cultural Revolution, my mother’s family owned a large area of land, enlisting peasants to work and farm the property. During the Cultural Revolution, my mom’s aunt had to marry someone from a lower socioeconomic class in order to save her family and avoid having their assets seized by the state. So, it’s no surprise that they are grateful for the “freedom” that Canada grants and feel compelled to express their gratitude in various ways, something that scholar Mimi Nguyen calls the “gift of freedom”. My parents express their gratitude by indoctrinating me into thinking that the democratic system of the Western world will always be better than living under the rule of the CPC. These words and sentiments led to my own commitment to support the West, which came at the expense of disapproving China and the CPC. I grew up apolitical, only speaking out to voice my dislike of the “Communist regime” my parents had fled from and my concern for the people of my homeland I presumed were “suffering” under an authoritarian government. Unbeknownst to me, I had internalized the latent anticommunism of many immigrant parents.

For many Chinese immigrant families, distrust of socialism is largely borne by former class character.

What I also failed to realize was that with my anti-China remarks, I was ultimately feeding the Western imperialist machine, giving it the rhetorical fuel it needs to increase warmongering fears against China and establish the West as a global stronghold. With its bastion of military bases across Asia and the Pacific, the U.S. has established itself as the military and economic hegemon in the region. Yet it maintains its coercive, violent presence in Asia as the “gift of freedom and democracy.” Weaponizing the confessional speech of Asian diaspora populations about our “authoritarian” homelands, the U.S. government has actively transformed its illegal occupation into a white savior fantasy of uplift and goodwill.

In reality, the increased military presence is an explicit method in which the U.S. is able to establish themselves as a constant threat to China. The U.S.’s empire of bases serve as a reminder that China’s political futures and possibilities are always constrained by U.S. “containment,” in which retaliation is but a hop and skip away. The U.S. is also able to use this opportunity to write their state as a “nation of immigrants” and “the leader of the free world,” making it their mission to “free” any persons suffering in the socialist bloc.

As I progressed through high school, I slowly began to learn that my efforts would be for naught; white people would never accept me as one of their own. So I started to reconnect with my heritage, albeit in superficial, aesthetic ways: bubble tea and shallow understandings of Chinese culture. This particular paradox of attempting to reconnect with one’s homeland while simultaneously assimilating into the West is extensively discussed by Frantz Fanon in The Wretched of the Earth, a work I had the opportunity to read this past summer, and one I would strongly recommend to any colonized person to learn about their relationship with their colonizers. In one particular chapter—“On National Culture”—Fanon writes about the three stages that a colonized intellectual progresses through leading up to the point of revolution. Reading this chapter made me realize that most, if not all, diaspora have experienced the first stage: “proving that he has assimilated [into] the colonizer’s culture.” This is where all of us attempt to fit into the West, at the expense of losing our culture, because our motivations to advance in a Western state lead to tunnel vision, where our only focus is to assimilate. The second stage is where most Chinese diaspora stagnate:

…the colonized writer has his convictions shaken and decides to cast his mind back. But since the colonized writer is not integrated with his people, since he maintains an outsider’s relationship to them, he is content to remember. Old childhood memories will surface, old legends will be reinterpreted on the basis of a borrowed aesthetic, and a concept of the world discovered under other skies.

By presenting their puddle-deep image of their culture to the West, diaspora are able to vacuously reconnect to their culture while still attempting to be accepted in the imperial core. The multiculturalism within the West allows for diaspora to superficially celebrate—and commodify—our cultures, while rewarding us for denouncing the political projects of our countries of origin. Because diaspora are only able to maintain an outsider’s relationship to their past, they can only discover and understand their past on a shallow plane “under other skies”, which Fanon uses to reference the nations in which diaspora reside. If we are to successfully organize and work towards dismantling Western hegemony, we must move beyond a surface-level cultural identification with our homelands and forge real political solidarities with them.

By presenting their puddle-deep image of their culture to the West, diaspora are able to vacuously reconnect to their culture while still attempting to be accepted in the imperial core. The multiculturalism within the West allows for diaspora to superficially celebrate—and commodify—our cultures, while rewarding us for denouncing the political projects of our countries of origin.

The focus on Asian American representation and those chosen as figureheads are carefully selected to reaffirm ideologies of U.S. liberalism and imperialism, making it detrimental to the fight against Western imperialism on an international and national scale. It’s telling that instead of standing with their comrades in their home nations or focusing on domestic issues (e.g. Black liberation, Indigenous sovereignty, and the destruction of Western hegemony over the hemisphere), mainstream Asian American culture celebrates the empty fruits of so-called representation, a liberal gesture staked on assimilation, mistaking partial recognition for political power.

Asian assimilation into the U.S. imperialist class is contingent upon becoming a native informant and confirming imperialist U.S. talking points about China.

More often than not, Asian assimilation into the U.S. imperialist class is contingent upon becoming a native informant and confirming imperialist U.S. talking points about China. For example, in an interview with CNN, Andrew Yang, who is currently running for New York mayor, voices the importance of distinguishing between the Chinese people from the government, and proceeds to blame the latter for their lack of transparency about the virus. His distrust and dislike of the CPC only act as confirmations of the negative depiction of the Chinese government in the West. Another example is California Congresswoman Judy Chu: when Senator Marsha Blackburn tweeted “China has a 5,000 year history of cheating and stealing. Some things will never change,” Chu refrained from commenting on the matter; her silence signaled a complicit agreement with Blackburn. One wonders: if Chu had spoken out against a Senator, what kind of backlash would she have experienced? When the film Mulan was released by Disney in 2020, Western film critics and political activists were quick to take to social media, rallying for the boycott of the film because female lead Liu Yifei defended the PRC position on Hong Kong. On the other end of the spectrum, Yang Shuping, an international Chinese graduate from the University of Maryland, was celebrated for her graduation speech, in which she shared anti-China and pro-America remarks. The contrast between Liu Yifei and the rest of the individuals make it clear that the politics of Asian Americans representation are often used to justify the ideologies of U.S. imperialism, with those who toe the U.S. line being rewarded and those who challenge it being spurned and silenced.

Our focus should not be on assimilating into the West, but rather organizing our communities, educating ourselves, and standing with the exploited peoples of Asia and the Pacific, whose lifeways and survival have and continue to be under threat by U.S. militarization.

With the increased violence against Asian Americans and the rising tensions with China, it is without a doubt that our focus should not be on assimilating into the West, but organizing our communities, educating ourselves, and standing with the exploited peoples of Asia and the Pacific, whose lifeways and survival have and continue to be under threat by U.S. militarization. For too long, the focus of the Asian American community has been solely on gaining representation within Western media and politics, but any gains in Western society have only fueled U.S. imperialism in the Asia-Pacific. To create a world where the people of the Asia-Pacific do not suffer under U.S. imperialism, where they are free to reclaim control over their futures, we must turn our focus from increasing our representation in the Western sphere to educating ourselves and working to dismantle the influence of U.S. hegemonism and imperialism.

A designer and researcher, Xin finds joy reading about the history of communism and eco-socialism in her free time. She is also an avid fan of vintage films and hiking.