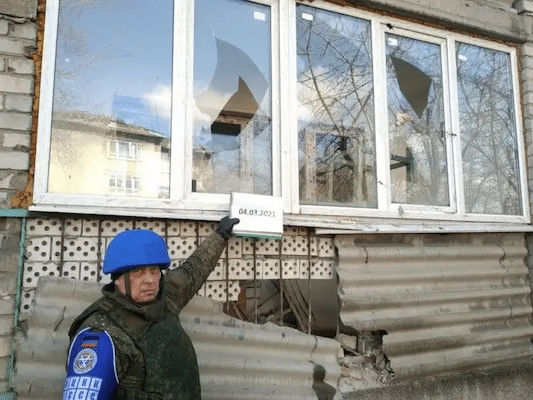 The USA has the unique condition of being a flagrant violator of human rights within its own borders and in practically every region of the world. No other nation has such a systematic record. Its massive control of media and communications hides this truth from its own people.

I thought of this tweet from Carlos F. de Cassio, the Cuban Foreign Ministry’s director for U.S. affairs, while reading the latest corporate news reports about the conflict between Ukraine and the independent Donetsk and Lugansk People’s Republics in the Donbass region of eastern Europe.

A series of alarmist articles appeared in late March and early April warning of an escalation in the seven-year war in the region and a buildup of Russian military forces in Crimea and near the border with Ukraine. Fanning the flames of these reports are recent statements by Biden administration officials.

Completely missing from these reports, however, is the fact that Ukraine has been building up its troops and military hardware on the “line of contact,” the front line of the conflict, since mid-January.

At the same time, Ukrainian military forces have stepped up unprovoked attacks on frontline settlements in Donetsk and Lugansk, killing and injuring residents and targeting homes, schools and other civilian targets.

The city of Gorlovka in the Donetsk People’s Republic (DPR) was one of several that came under increased fire from Ukrainian forces starting in February.

On Feb. 20 “the mayor of Gorlovka denounced the increase in Ukrainian shelling on the outskirts of the city. According to the population of the area, the bombardments, with the use of heavy artillery, had started in the early morning and lasted throughout the night. At least one DPR soldier was killed in the shelling, after which, as a precaution, shelters in the city were reopened,” reported Slavyangrad.es.

Then on the night of Feb. 21-22, a big attack on Gorlovka resulted in the deaths of several troops of the Donetsk People’s Militia.

Another settlement under frequent attack in February was Staromikhaylovka, where teacher Nadezhda Vasilievna’s house was destroyed by Ukrainian shelling on Feb. 17. Fortunately, she had gone out for coal and wasn’t home when the bomb hit.

It was only after weeks of these escalating attacks that the Donetsk People’s Militia was authorized to respond with defensive fire on March 3.

On March 4 Ukrainian forces launched a missile attack on Donetsk, capital of the DPR. The Donetsk People’s Republic Foreign Ministry said that “the strike at Donetsk with multiple rocket launchers on Thursday morning was terror against the civilian population.” It was the first time Ukraine had used these prohibited weapons since 2018, it said.

“Earlier, the Joint Center for Control and Coordination reported that Kiev forces used a Grad-P rocket system to fire at the northern suburbs of Donetsk on Thursday morning. The strike was delivered from Ukrainian forces positions in the Opytnoye village area,” reported the Donetsk News Agency.

The Donetsk Foreign Ministry repeatedly appealed for the Organization for Security and Cooperation in Europe (OSCE) to send monitors to investigate the increased attacks, and for Ukraine’s patrons in the U.S. and European Union to rein in Kiev’s provocations.

A 71-year-old pensioner was killed March 22 after Ukrainian troops opened fire on Alexandrovka, a suburb of the Donetsk capital. Emergency personnel were unable to provide medical aid or even remove the person’s body for some time while the shooting continued.

Punishers of the Ukrainian 28th Brigade, deployed to Maryinka, opened sniper fire on Alexandrovka in an attempt to provoke retaliatory fire, following the command of their commander Maxim Marchenko.

On the night of March 26, in the frontline settlement of Zolote-5 in the Lugansk People’s Republic, a school and residential buildings were damaged after shelling by the Ukrainian military. During an earlier shelling, in the daytime on March 11, children had to be evacuated from the school.

“Residents of Zolote say that the shelling has become more frequent. There is no truce for Ukrainian militants. They use various weapons, including large-caliber ones,” Komsomolskaya Pravda reported.

These and numerous other acts are violations, not only of the current ceasefire agreement negotiated by the OSCE last July, but also of the 2015 Minsk Agreement between Ukraine, Russia, France and Germany, which bars Ukraine from deploying and using heavy weaponry in the region.

Donbass has repeatedly seen that it makes no difference to Ukrainian armed formations who their targets are: soldiers, pensioners, women or children. While Ukraine reports at international venues the successful observation of tighter ceasefire control measures, civilians continue to get killed.

On March 1, “The Pentagon announced a $125 million military aid package for Ukraine, the first of its kind under the Biden administration,” wrote Defense News.

The U.S. State Department has [also] cleared a potential sale to Ukraine of 16 Mark VI patrol boats and other gear worth $600 million.

While these amounts are small potatoes by Pentagon standards, they sent a clear message of encouragement to Kiev. (It was Donald Trump who first authorized direct weapons sales to Ukraine. The Obama administration preferred to arm Ukraine through third parties in NATO, including Poland and Turkey, and the Persian/Arabian Gulf monarchies. These are still the country’s main sources for offensive weaponry.)

On March 15, Ukrainian media quoted sources in the military that they were at “readiness level one” awaiting orders for a military offensive against Donbass.

The Russian government restated its commitment to defend the Donbass in the event of a full-scale Ukrainian assault. This was the context for Biden’s subsequent provocative declaration calling Russian President Vladimir Putin a “killer” during an ABC interview March 17.

As Struggle-La Lucha has reported, President Joe Biden has a longtime relationship with the right-wing regime in Kiev.

After the U.S.-backed coup of February 2014, Biden–then vice president–became the official in charge of overseeing the new regime to ensure the interests of U.S. big business and NATO military goals. This included austerity measures, repression, privatization and the war in Donbass.

U.S. imperialism has had a longstanding plan to dismantle the neighboring Russian Federation since the early 1990s, which includes the expansion of NATO military power to Russia’s border.

A key component of the U.S. takeover of Ukraine was the use of ultra-right nationalist and neo-Nazi groups. These groups provided the shock troops for the 2014 coup, took violent measures against opposition groups in Ukraine, and were unleashed as “volunteer battalions” against Donetsk and Lugansk after their people voted overwhelmingly for independence. The fascist gangs were then integrated into the Ukrainian army and police.

Today Ukrainian President Vladimir Zelensky is relying on these same forces to increase pressure on the Donbass republics and Russia. For example, journalist Dmitry Rodionov noted that large numbers of troops affiliated with the fascist group Right Sector are being transferred to the region near Gorlovka.

“According to sources, the militants were spotted in Konstantinovka and Dzerzhinsk. The Rightists do not hide their presence, openly wear their symbols, intimidating the local population. The militants are occupying houses, driving out the owners from them. At the same time, the local authorities are not doing anything–no one wants to challenge them,” Rodionov explained.

The Ukrainian neo-Nazis regard the Russian-speaking residents of the Donbass region as sub-humans who should be “cleansed.” They have the same opinion of other national minorities and any ethnic Ukrainians with leftist and anti-fascist views.

Besides the war in Donbass, which has claimed 14,000 lives according to the U.N., the clearest expression of their intentions was the massacre of 48 anti-fascists and labor activists in the Ukrainian city of Odessa on May 2, 2014.

Fascists rallied for Trump at the Capitol in Washington, D.C., on Jan. 6. But in Ukraine fascists were emboldened by Biden’s taking office. Ironically, Ukrainian nazis also helped to train some of the Trump-supporting white supremacists who took part in the deadly 2017 Charlottesville “Unite the Right” rally that ended in the death of anti-racist activist Heather Heyer.

This is why it’s important for workers in the United States to understand that both capitalist parties represent the interests of imperialism and its exploitation of people abroad and at home. Today Democratic Party leaders may posture as opponents of fascist and white supremacist groups in the U.S. But they are only too willing to make use of them abroad when it suits the interests of Wall Street.

Workers in the U.S., like those fighting for a union in Bessemer, Ala., have more in common with the workers in Donbass threatened by bombs and blockade and workers in Ukraine fighting austerity than they do with the occupants of the White House, whatever their differences of geography, language and culture.

And we have a responsibility to demand: No war in Donbass! U.S. out of Ukraine!