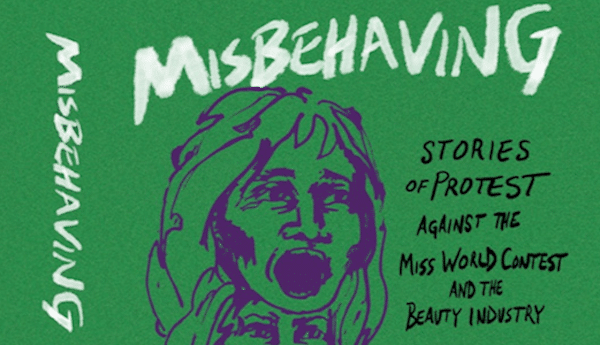 ‘The spectacle is vulnerable,’ proclaimed the pamphlet Why Miss World? And so it proved to be on 20 November 1970, when activists from the nascent women’s liberation movement deployed rattles, chants, banners, flour, smoke bombs, stink bombs, ripe tomatoes and bundles of cascading leaflets to disrupt the 1970 Miss World pageant at London’s Albert Hall, in front of a global television audience of a hundred million people.

Misbehaving: stories of protest against the Miss World contest and the beauty industry tells the stories of those who took part in the action in their own words, but does much more than merely record the night’s events, with writers sharing what brought them to the movement and how it changed their lives. In doing so, it contributes to our understanding of 1970s struggles, and to questions that resonate beyond that historical moment. What leads us to join political campaigns? What sustains our involvement? What is the role of our individual and collective memories of mutual struggle?

Reflecting the movement itself, these accounts fuse the personal and political. Painful memories of childhood and teenage years take their place alongside happier recollections. Many contributors followed a path from grammar school to university, the first in their family to do so. They were active in late 1960s political struggles: showing solidarity with Cuba and Latin American political exiles, opposing apartheid and the war in Vietnam. The left they encountered was male-dominated, replete with ‘leather-jacketed, smoke-filled egotistical bombast’. In the aftermath of the 1968 ‘summer of love’, many men expected women to be sexually available on demand.

Women’s liberation was the first time that these activists had organised around their own lives, and it was transformative. Reading Misbehaving  brought back the thrill of my own discovery of feminism, the new understanding that came from reading the theories these women forged from their collective experiences.

The Miss World protest was a turning point for the movement, leading to a surge in participation, but the 1970 competition held other significance. Previous contest winners had all been white, reflecting and projecting racialised images of beauty. After protesters vacated the Albert Hall, Jennifer Hosten of Grenada became the first black woman to be crowned Miss World. Incredibly, the organisers had allowed apartheidera South Africa to enter two contestants, one black and one white: the former, Pearl Jansen, was runner-up.

Jane Grant’s book chapter is notable for her candid reflections on why this result had little impact on the protesters at the time. While they were involved in struggles against racism and imperialism, white women’s liberation activists failed to sufficiently engage with black women about the issues they faced as black women–a point made by many black feminists.

Misbehaving sometimes makes for uncomfortable reading. A distance of 50 years didn’t lessen my revulsion at hearing that pageant host Bob Hope bragged about taking the winner to Vietnam to ‘give the GIs the hots’. It feels like a triumph when he’s driven from the stage. Successive chapters stress that the protest targeted organisers who profited from the contest and the patriarchal capitalist system it represented, not the contestants themselves. Yet presenting the competitors as the embodiment of that system leaves little room for their agency. Misbehaving forces consideration of the many ways in which women are pitted against each other, which extend far beyond the beauty contest.

It’s hard to imagine a contemporary parallel for the action’s reach: a spectacle that disrupted a spectacle marketed and consumed as prime-time family entertainment. Afterwards, many of the protesters put their energies into collective solutions to the material needs of themselves and other women, establishing food co-ops, community nurseries and claimants’ unions. Jane Grant explains: ‘We wanted to draw a line under the spectacular direct action of the Miss World protest and concentrate more on working in the community and building a movement.’ Communal living, mutual aid and feminist friendship permeate the accounts as crucial to sustaining their involvement in women’s liberation, supporting them across their lives.

‘We’re not beautiful, we’re not ugly, we’re angry!’ was the defining slogan of the Miss World protest. As much as the anger, it is the optimism, creativity and fun of the early women’s liberation movement that rise from the pages of Misbehaving.

Misbehaving: stories of protest against the Miss World contest and the beauty industry is edited by Sue Finch, Jenny Fortune, Jane Grant, Jo Robinson and Sarah Wilson and published by Merlin Press