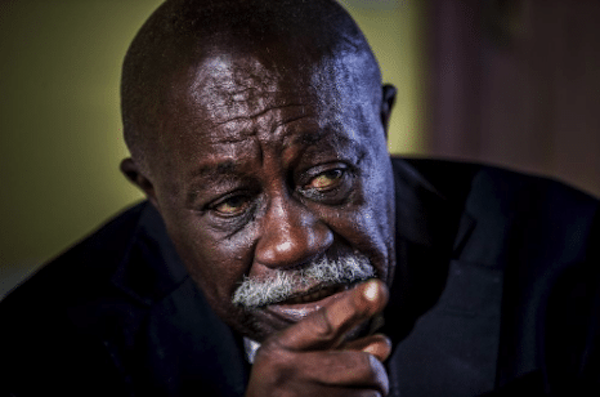 Víctor Dreke, legendary commander of the Cuban Revolutionary Armed Forces, called for those defending the Revolution today to recognize that the battlefield of the 21st century is the media.

The comments were made at a conference held on Thursday, April 22, commemorating the 60-year anniversary of the Bay of Pigs—Playa Girón to the Spanish-speaking world. Comandante Dreke, now retired at age 84, spoke alongside author, historian, and journalist Tariq Ali; Cuba’s Ambassador to the United Kingdom, Bárbara Montalvo Álvarez; and National Secretary of Great Britain’s Cuba Solidarity Campaign, Bernard Regan.

It is the next generation, those who are here, who are going to be even better than us. It will no longer be a case of combat… Right now, the media across the world has to defend the Cuban Revolution, and we and you have to be capable of accessing the media across the world to spread the truth about the Cuban Revolution. That is the battle we are waging today—to fight attempts to weaken the people, to soften the people, to try to take the country again. They have changed their tactics. We are ready, but we want to say to our friends in the Americas and around the world that Cuba, the Cuba of Fidel Castro, Raúl Castro, Juan Almeida, the Cuba of Che Guevara, will never fail, neither with us nor with the future generations.

Dreke joined the 26 July Movement in 1954, fought under Che Guevara in the Cuban Revolutionary War and in Democratic Republic of the Congo in 1965, and commanded two companies in Cuba’s historic defeat of U.S. imperialism at the Bay of Pigs. Dreke’s autobiography, From the Escambray to the Congo: In the Whirlwind of the Cuban Revolution, was published in 2002.

Cuba and Venezuela provide inspiration for Latin America and the world

Comandante Víctor Dreke drew a comparison between Cuba’s historic defense of the revolution and that of Venezuela, as both countries now face a common weapon in the arsenal of imperialism: the economic blockade.

“They block medicines for Cuba, they block aid for Cuba,” said Dreke.

Regarding the failed 1961 U.S. invasion of Cuba, Dreke remarked,

it was an example for Latin America that proved that the U.S. was not invincible; that the U.S. could be defeated with the morality and dignity of the people—because we did not have the weapons at that time that we later acquired. It had a meaning for Cuba, the Americas, and the dignified peoples of Latin America and around the world.

Tariq Ali: we must see through ideological fabrications to defeat imperialism

Tariq Ali, esteemed author of more than 40 books, recalled the precursor of the U.S. invasion of Cuba, the 1954 CIA coup in Guatemala in which President Jacobo Árbenz was overthrown and forced into exile. A young Ernesto Guevara was living in Guatemala at that time and bore witness to the multifaceted CIA operation PBSuccess, which included bombing campaigns with unmarked aircraft and a propaganda blitz of leaflets and radio broadcasts. Ali described the evolution of CIA tactics since then:

Normally the way they choose is to occupy a tiny bit of territory, find a puppet president, and recognize the puppet president. They are doing that in the Arab world today, or have been trying to do it. They did it with Guaidó in Venezuela, except that the Venezuelan army would not play that game and it blew up in their face, their attempt to topple the Maduro regime. They are trying it in parts of Africa. The weaponry has changed, it is more sophisticated, but the actual method they use, ideologically, is the same. That’s why it always amazes me as to why so many people believe the rubbish they read when a war is taking place.

Ali also weighed in with a forecast for U.S. foreign policy under the Biden administration:

We can be hopeful for surprises… But effectively, whoever becomes president of the United States, whether it is Obama, or Biden, or Trump, or Clinton, or Bush, they are presidents of an imperial country, an imperial state, and this imperial state is not run all the time by the Congress or the Senate or the Supreme Court. The military plays a very important role in the institutions of the state, and the National Security Council, the Pentagon, the Defense Intelligence Agency, and the Central Intelligence Agency are in and out of the White House, so the president who decides to make a sharp shift—it can be done, I am not saying it cannot be done—would have to be very brave and courageous indeed.

“Whoever from the Democrats gets elected—whatever their position—immediately comes under very heavy pressure,” Ali elaborated.

If you look at AOC [Alexandria Ocasio-Cortez]… initially very radical, but now she is totally on board… I have never heard her say sanctions should be lifted, and she certainly supports even the old Trump line on Venezuela.

Hybrid warfare in the information age

“Direct warfare in the past may have been marked by bombers and tanks, but if the pattern that the U.S. has presently applied in Syria and Ukraine is any indication, then indirect warfare in the future will be marked by ‘protesters’ and insurgents,” detailed Andrew Korybko in the publication Hybrid Wars: The Indirect Adaptive Approach To Regime Change.

Fifth columns will be formed less by secret agents and covert saboteurs and more by non-state actors that publicly behave as civilians. Social media and similar technologies will come to replace precision-guided munitions as the ‘surgical strike’ capability of the aggressive party, and chat rooms and Facebook pages will become the new ‘militants’ den.’ Instead of directly confronting the targets on their home turf, proxy conflicts will be waged in their near vicinity in order to destabilize their periphery. Traditional occupations may give way to coups and indirect regime-change operations that are more cost effective and less politically sensitive.

Hybrid warfare, waged today by the U.S. and its political allies in conjunction with transnational corporations that wield powerful influence over mass media and political institutions, comprises the fields of economic warfare, lawfare, conventional armed warfare, and the information war. This last and most important—according to Commander Dreke—element in turn includes the manipulation of the press to serve capitalist and imperialist interests, the manufacture of fake news stories out of whole cloth, and targeted attacks on individuals, parties, or peoples who speak out against the failings of the present order. Moreover, hybrid warfare extends to interference in the political field and in electoral processes, the mounting of media campaigns to drive public attention into particular channels, and myriad assaults on our consciousness that attempt to turn us against each other, prevent us from seeing our common interests, and confuse us as we try to overcome defeatism and work to build a better world.