In the first of a two-part series KENNY COYLE interviews the Communist Party of Burma about the social and economic mismanagement of the military regime. Part 2

The military coup in Myanmar on Feb. 1 this year is a product of the country’s long-running social and economic crisis, according to the Communist Party of Burma (the party prefers to refer to its country as Burma, as some other opposition forces also do, rather than the military-chosen name Myanmar.) 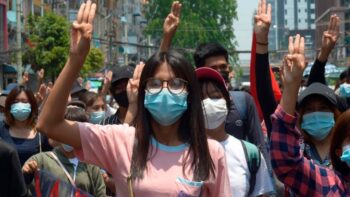 Anti-coup protesters flash the three-finger sign of defiance during a demonstration in Yangon, Myanmar, on Friday, April 23, 2021. | AP

The Communist Party of Burma (CPB) was founded in August 1939 by a group of revolutionaries in a British-ruled colony. The founders included national hero Aung San, father of recently deposed State Counsellor Aung San Suu Kyi.

The party survived decades of illegality, including prolonged periods of armed struggle against foreign occupiers and a succession of repressive domestic military regimes. It suffered a major crisis in the late 1980s with the loss of its remaining base areas in the frontier regions of Burma. Members were then scattered and had to rebuild their underground structures within the country and exiled communities.

Highlighting the current crisis, a CPB spokesman says: “People from all walks of life are struggling with exemplary courage against the cowardly military oppressors that are waging ruthless war against unarmed civilians. Our party has been resorting to every available means to support our courageous people.”

Today’s military regime has its roots in the coming to power of the Burmese Socialist Programme Party (BSPP), sometimes known as the Burmese Way to Socialism Party, in 1962. The CPB believes that the BSPP squandered the possibilities of advancing national development, industrialization, as well as popular well-being and—far from taking a socialist path—held the country back with its system of crony capitalism.

Burma’s development in society and economy has made very little progress since Bo Ne Win and the BSPP coup in 1962. One can easily witness the decline in quantity and quality in every field, including education, health, social welfare, and many other aspects.

If someone says that there are more foreign investments and companies than in the past, we would only point out that one should check out who profited from these.

The ruling class—as well as the generals—claim that they have created jobs for ordinary people during their rule. To be exact, the number is about 500,000 workers in a nation with 50 million. True, ordinary people obtain jobs, but profits went into the coffers of the generals’ family members and their cronies of all sorts.

The so-called industries introduced into Burma by the military generals consist mostly of home industries, where neither modern technology nor heavy investment is involved.

Myanmar is a textbook example of parasitic crony capitalism. The military is deeply embedded, resulting in poverty for the overwhelming majority of the population and prosperity for the few.

When one sees new high buildings and posh limos, one can’t help asking who owns them. This only indicates the difference of income between the people of the highest and lowest incomes.

As with some other Southeast Asian countries, Myanmar exports a huge proportion of its population overseas as migrant workers. Despite their super-exploitation, with many working illegally, they have become a significant source of remittance income for the country.

A few days ago, I noticed some numbers published by the Department of Labour of the present government in Burma. It said: ‘Until June this year, the total remittance of money by Myanmar migrant workers amounted to over $500 million USD.’ Further, it said: ‘The official remittance of money accounted for 0.81% of the GDP in 2016-2017 financial year and 1.06% in 2017-2018 financial year. 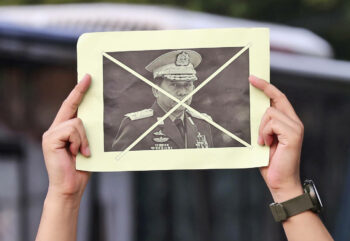 After the break out of COVID-19 and the present conflict in Burma, the migrant workers—most of whom left the nation illegally—could not send their money back to their low-income family members back home, and the family members are facing insurmountable difficulties.

Burma’s migrant workers work mostly in neighboring countries such as Thailand, China, Malaysia, etc., and total about five million. You can find Burmese workers even in faraway lands like Qatar, South Korea, and Jordan.

About three million alone are working in Thailand, most of them as low-paid laborers, according to U Myo Aung, the permanent secretary of the Ministry of Labour.

Some estimates suggest that as much as 10% of Myanmar’s workforce are migrant workers. Aside from those in employment, Myanmar has also seen a hemorrhaging of its most vulnerable people into refugee camps outside its borders, who often face additional hostilities in exile.

Burma’s other export to neighboring countries is refugees, who left their homes because of war or racial oppression. Immigrant camps, containing not less than 100,000 each, are scattered all along the borders, and they exist there under the scorn of their hosts.

The CPB believes that the ruling elite has failed to implement an independent economic strategy, despite the country’s considerable natural wealth.

The foreign investments are centered on exploiting Burma’s natural resources, chiefly oil and gems. Many labor-intensive projects like plantations and mining are also scattered all over the nation, exploiting one of the world’s cheapest labor sources—Burmese villagers.

In fact, both the laborers from the plantations and the local people enjoy a minimal benefit from various plantations that grow bananas, rubber, corn, medicinal herbs, etc., whereas the investors who take away more than 90% of the output to their destined areas reaped high-yielding harvests every season.

The crisis, the party points out, is not simply one of industrial backwardness but also flows from the failure to modernize production in the agricultural sector sustainably.

The exploitation of resources results not only in destroying the environment; it depletes the earth of its irreplaceable natural resources and fertility. The rich soil was left dry and infertile from artificial fertilizers and pesticides when the plantation lands were returned to the local people.

The people of Burma are suffering from heedless logging, mining, and plantations by the foreign investors and local rich people.

Landslides on mountain slopes, soil erosion, drying up of streams and rivers, diminishing wild animal species and of course, weather changes, can be found across the nation.