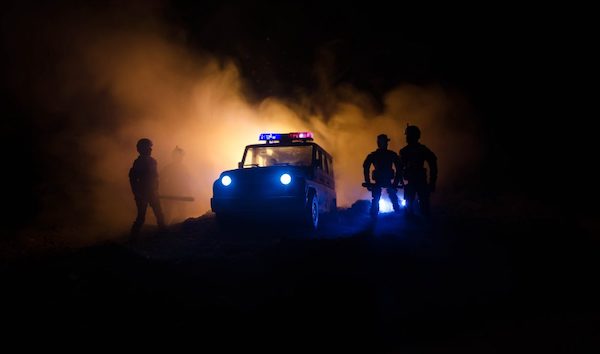 In August 2020, Sam Levitin, writing for the Guardian, reported on findings from an in-depth study titled “Hidden in Plain Sight: Racism, White Supremacy, and Far-Right Militancy in Law Enforcement,” which was conducted by Michael German, a 16-year veteran of law enforcement and a fellow with the Brennan Center for Justice’s Liberty & National Security Program. Writing in The Intercept that same month, Alice Speri reported on a heavily redacted 2006 FBI threat assessment that had just recently been released to the public in unredacted form by Representative Jamie Raskin ahead of his September 29, 2020, House Committee on Oversight and Reform hearing on the subject. The Intercept’s reporting highlighted the fact that the FBI “had major concerns about the infiltration of police departments for years but failed to warn the public.” And Simon Purdue, reporting for Open Democracy in August of 2020, cited a 2019 Reveal News investigation which uncovered “hundreds of active duty and retired law enforcement officers” that are currently members of online forums dedicated to Islamophobia, Neo-Confederate ideology, and Neo-Nazism.

Giving historical context to this story, The Intercept’s reporting outlines the FBI’s prior knowledge of local law enforcement agencies infiltrated by white supremacists. Reporting from the Guardian and Open Democracy speaks to the immediacy of the problem in light of recent events, such as the killing of George Floyd and subsequent marches and protests against police brutality. The Intercept’s article, zeroing in on the FBI’s prior knowledge of the problem and their refusal to act, cites September’s House Committee on Oversight and Reform hearing and Rep. Raskin’s blunt assertion that “the FBI’s continuing refusal to acknowledge and combat this threat, just like its refusal to appear today, constitutes a serious dereliction of duty.”

The Guardian article looks deeper into more recent events such as those in Kenosha, WI, reporting that activists there say local police have responded “aggressively and violently to Black Lives Matter demonstrators while doing very little to stop armed white vigilantes.” Open Democracy’s reporting and analysis of a Reveal News investigation links local law enforcement officers around the country to the far-right, neo-fascist organizations the Proud Boys, noting that “in May 2020, Chicago Police Department officer Robert Bakker was found to have been an active member of a Proud Boy telegram channel…where he actively coordinated Proud Boy meet-ups and bragged about his connections in the police department and the government.”

Although white supremacists infiltrating law enforcement is a growing concern that the public has a right and need to know about—and one that the FBI had previously recognized as such—corporate news media have largely ignored this story. This is especially alarming in light of widespread protests, demonstrations, and calls for social and racial justice that took place over the summer of 2020. The PBS News Hour ran a story back in 2016, ten years after the FBI’s first redacted report came out, as a follow-up story that looked into whether anything had changed. More recently, a local Fox affiliate—Fox News 23 from Tulsa, OK—reported briefly this past September on the House Oversight Committee’s hearing on white supremacists’ ties to local police departments, while a Vox article from July touched briefly on systemic racism but focused more broadly on police violence and the policing ideology known as “the thin blue line.” Aside from these three stories, two recent and one four-years old, it was hard to find any further corporate news coverage on the topic.

After a turbulent summer when institutional and structural racism in America has been front and center—with white supremacy among law enforcement’s rank and file a frightening manifestation of that racism—corporate news media have grossly under-reported a story that is not only relevant and timely, but also fact-based as demonstrated in the investigative journalism conducted by independent outlets like the Guardian, The Intercept, and Open Democracy.