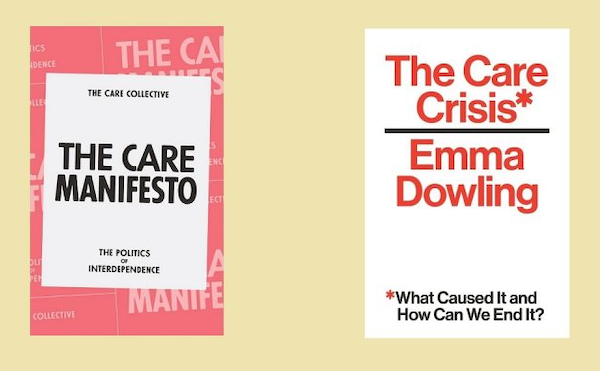 In March 2020, Annemarie Plas learned that her native Netherlanders were publicly applauding carers for their dedication in the fight against COVID-19. She posted about it on social media, encouraging people in the UK to do the same. The idea spread quickly and soon applause and pot banging could be heard on streets across the country every Thursday evening. The Prime Minister and his partner even joined from the steps of 10 Downing Street. But then the backlash began. Not against Plas herself, but against the idea that platitudinous applause was enough to compensate for a hugely under-resourced, under- staffed and under-valued care infrastructure. It was a salutary recognition that the cracks now widened into crevasses by COVID-19 had been laid down long before. The coronavirus might be new, but the care crisis was far from it.

It’s this structural crisis that academic Emma Dowling takes on in her new book, The Care Crisis: what caused it and how can we end it? Central to her thesis is the idea of the ‘fix’–that is, the way in which a capitalist economy will attempt to address the crises it creates, or the limits it meets, by reorganising itself in order to maintain profitability. Dowling identifies an array of these fixes in relation to care, exposing how capitalist logic undermines its provision.

Chief among these reorganisations is the movement of production to places where labour is cheaper and less regulated. This works for goods, but care work can’t be transplanted in the same way. Instead, the capitalist economy inverts the model, sending migrants from eastern Europe and the global south to take up badly paid, precarious caregiving roles in the global north. This doesn’t actually solve the need for care provision but merely displaces it, creating ‘global care chains’ in which migrants perform care for people in wealthier contexts at the expense of their own caring responsibilities back home.

What appears to be a story of a care crisis behind British front doors is in fact a tale of international harm. Most perniciously, the logic identified by Dowling is leading to a reductive redefinition of care, one that tries to fit a fundamentally complex and humane endeavour into a simplistic and market-centred rationale. In order to extract maximum profit, the very meaning of the word ‘care’ has been reconfigured away from its broad relational connotations towards a narrowed idea, marked by standardisation and routine. In practice, this means that the tasks considered to constitute care become limited to physical activities. Paid care workers have their shifts shortened and their time monitored, forcing their focus to be task-oriented rather than relational. NHS workers explain that it’s now volunteers who give patients ‘high- quality time and attention’, while paid staff perform solely the tasks considered to be medical.

I read Dowling’s book after spending three gruelling years caring for my mother through a long and eventually fatal illness. While I performed many physical tasks throughout that period, from dispensing medicine to supporting physiotherapy, those chores are not the totality of care. Instead, care is best conceptualised as a kind of attention, a constant and loving hypervigilance that seeks to understand and meet needs. It requires time and trust. It includes standardisable tasks, but also a much richer range of unquantifiable skills and interactions in order to know when and how to perform those tasks appropriately. These are not things that capitalist logic can accommodate as it attempts to turn care into a factory production line. It begs a question of caregiving in our society: is our aim efficiency, or love?

The logical extension of this redefinition of care is that it can be performed by machines. The use of care aids is not new–after all, a bell used to summon support is arguably the antecedent of contemporary ‘smart’ objects that sense when somebody falls. And, as Dowling recognises, inventions that support independence are highly prized by both those needing and those providing care. But there is an important difference between the use of technology to assist human- led care and that which replaces it. Countries including the UK, USA, South Korea and Japan are pouring billions into ‘intelligent’ machines designed to provide care.

In the UK, Inovate, the government body used to invest in new social endeavours, has funded a robotics system called Juva designed to be fitted to a house or care home room that can fetch objects and help the individual to move around. ElliQ is an American robotic ‘sidekick’, which aims to support older people and can offer suggestions for activities, alongside chit-chat such as wishing users a good morning or asking how they feel. There is a risk that these ‘carebots’ move away from assistive technologies designed to enhance human-led care into a dystopian future where humans are residual, ignoring the fact that, as Dowling puts it, ‘in care work, physical and emotional tasks are intertwined and cannot be neatly separated’.

The real horror, though, is not this dystopian future. Instead, it’s the uncomfortable fact that it may be welcomed with open arms by carers themselves if society doesn’t change, and change radically. Under current circumstances, the caregiving experience is arduous at best and damaging at worst. This is true for paid and unpaid carers alike. For example, Ndella Diouf Paye has previously written for the Red Pepper website about her experiences as a paid careworker (‘Frontline workers and COVID-19: a carer’s account’, 16 October, 2020), describing precarity, exploitation and a demoralising lack of recognition. And charity Carers UK has found that informal, unpaid carers–like I was–have higher rates of depression and anxiety than the general population, alongside social isolation and financial strain.

Carers everywhere are on their knees. This is the genius of our current political economy: precarious work, under- resourced social safety nets and the individualisation of responsibility have combined to exhaust and disempower us, funnelling us towards solutions of its own design. Consequently, we can only avoid a dystopic, robotic future by reorganising the whole of our political economy with care at its heart.

It’s here, though, that the topic of care can become unwieldy, a problem that hampers Verso’s other recent care offering, The Care Manifesto: the politics of interdependence. Part of its series of short pamphlets on key current issues, the Manifesto has been authored by a collective of academics from a breadth of disciplines. The ideas in the book are laudable and important, but so wide-ranging that it ends up being less than the sum of its parts. The pamphlet becomes a kind of political Rorschach test, with each author reading into the topic of care all of their political ideals and aims. Like Dowling’s The Care Crisis, it doesn’t draw explicitly on the personal experience of providing care. This omission isn’t necessarily a flaw–both books serve a useful purpose for those of us wishing to imagine and create a more caring future–but nonetheless it affects what the authors observe and the purchase of their arguments on the reader.

Dowling peppers her book with vignettes drawn from twenty formal interviews, but these stories feel disconnected from the political arguments and the choice to relay them in third person gives an oddly clinical feel to such an intimate topic. Both books make a strong case that addressing structural problems will support carers better, and therefore ease their experience, but both shy away from the less savoury issues of our collective psyche when it comes to care, ones that may only be revealed through direct experience.

For myself and the other carers with whom I shared solidarity over the past three years, social rejection and isolation were a common experience. All of us had experienced this, from partners leaving due to our care responsibilities to acquaintances blenching at the mention of our home lives. This is the lived experience of what scholars call ‘error management theory’, an evolutionary tactic to avoid making errors that will threaten our survival. In a social context, when faced with signals of ill health, we err on the side of avoidance to protect ourselves. In her work on this phenomenon, Megan Oaten, professor of applied psychology at Australia’s Griffith University, explains that this applies to non-infectious diseases as much as infectious ones. People will avoid shaking hands with, or wearing a jumper worn by, someone with cancer. And it extends to the people in proximity to the stigmatised individual, not just the objects. This problem needs confronting with hard questions about how we feel about being needed, about giving up our own freedoms in order to care, and about proximity to death.

Relatedly, both books fall into the trap of talking about all forms of care as homogeneous. But childcare and caring for someone profoundly unwell are different–in their daily lived experience, in their outcomes and in the social reactions they provoke. When we elide them, we perpetrate the same crime committed against care from time immemorial: we make it invisible. Thus, despite there being at minimum an estimated nine million people providing informal care to sick, disabled or elderly loved ones in the UK today, we’ve ended up with paid parental leave, but no paid carer’s leave. Maternity is a protected characteristic under the Equality Act, but being a carer is not, even though it can hamper employment prospects and rights too. Generalisations can be useful in order to paint radical visions, but we mustn’t lose sight of the specificity of different experiences when we attempt to parse out a problem and its solutions.

Dowling is astute in her recognition that framing a social issue like care as a ‘crisis’ can be self-defeating, joining a ‘cacophony of crisis’ to which we are necessarily numbed. COVID-19 thrust this particular crisis to the top of the pile, bringing millions of people out of their homes on a weekly basis to applaud its importance. It remains to be seen whether the vaccine will immunize us from our concern for care, or mark the start of a kinder, more caring future.