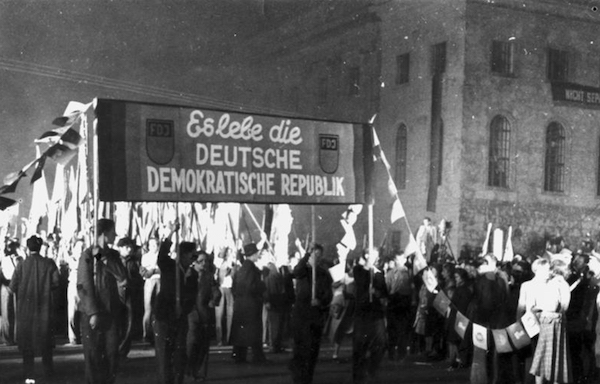 A mass rally with the Free German Youth that marked the founding of the German Democratic Republic in the Soviet Occupation Zone, October 1949.

A full generation has elapsed since the Union of Soviet Socialist Republics (USSR) collapsed in late 1991. Two years earlier, in 1989, the communist states of Eastern Europe dissolved, with the first salvo fired when Hungary opened its border. On 3 March 1989, Hungary’s last communist prime minister Miklós Németh asked the USSR’s last President Mikhail Gorbachev whether the border to Western Europe could be opened. ‘We have a strict regime on our borders’, Gorbachev told Németh, ‘but we are also becoming more open’. Three months later, on 15 June, Gorbachev told the press in Bonn (West Germany) that the Berlin Wall ‘could disappear when the preconditions, which brought it about, cease to exist’. He did not list the preconditions, but he said, ‘Nothing is permanent under the Moon’. On 9 November 1989, the Berlin Wall was knocked down. By October 1990, the German Democratic Republic (Deutsche Demokratische Republik or DDR) was absorbed into a unified Germany dominated by West Germany.

As part of the unification, the structures of the DDR had to be demolished. Headed by the Social Democratic politician Detlev Rohwedder, the new rulers created the Treuhandanstalt (‘Trust Agency’) to privatise 8,500 public enterprises that employed over 4 million workers. ‘Privatise quickly, restructure resolutely, and shut down carefully’, Rohwedder said. But before he could do this, Rohwedder was assassinated in April 1991. He was succeeded by the economist Birgit Breuel who told the Washington Post, ‘We can try to explain ourselves to people, but they will never love us. Because whatever we do, it’s hard for people. With every one of the 8,500 enterprises, we either privatise or restructure or close them down. In every case, people lose jobs’. Hundreds of firms that had been public property (Volkseigentum) fell into private hands and millions of people lost their jobs; during this time, 70% of women lost their jobs. The stunning scale of the corruption and cronyism only came out decades later in a German parliamentary inquiry in 2009. 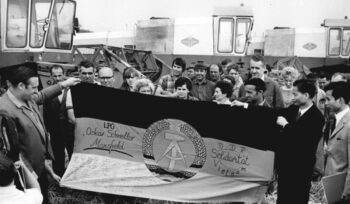 Cooperative farmers handing over a flag of solidarity with the motto ‘Solidarity Hastens Victory’ written on it to the Ambassador of the Democratic Republic of Vietnam, 1972.

Not only did the public property of the DDR slip into the pockets of private capital, but the entire history of the project vanished in a haze of anti-communist rhetoric. The only word that remained to define the forty years of DDR history was stasi, the colloquial name for the Ministry for State Security. Nothing else mattered. Neither the de-Nazification of that part of Germany–which was not conducted in the West–nor the impressive gains in terms of housing, health, education, and social life occupy space in the public imagination. There is little mention of the DDR’s contribution to the anti-colonial struggle or to the socialist construction experiments from Vietnam to Tanzania. All this vanished, the earthquake of the reunification swallowing up the achievements of the DDR and leaving behind the ash heap of social despair and amnesia. Little wonder that poll after poll–whether in the 1990s or the 2000s–show that large numbers of people living in the former East Germany look back longingly for the DDR past. This Ostalgie (‘nostalgia’) for the East remains intact, reinforced by the greater unemployment and lower incomes in the eastern over the western part of Germany.

In 1998, the German parliament set up the Federal Foundation for the Study of Communist Dictatorship in East Germany, which set the terms for the national appraisal of communist history. The organisation’s mandate was to fund research on the DDR that would portray it as a criminal enterprise rather than a historical project. Fury governed the historical undertaking. The attempt to delegitimise Marxism and Communism in Germany mirrored attempts in other countries in Europe and North America that hastened to snuff out the reappearance of these left ideologies. The ferocity of efforts to rewrite history suggested that they feared its return. 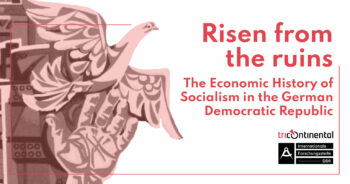 Tricontinental: Institute for Social Research partnered with the Internationale Forschungsstelle DDR (IF DDR) to produce the first of a new series, Studies on the DDR.

This month, Tricontinental: Institute for Social Research partnered with the Internationale Forschungsstelle DDR (IF DDR) to produce the first of a new series, Studies on the DDR. The first study, Risen from the Ruins: The Economic History of Socialism in the German Democratic Republic, goes beneath the anti-communist sludge to unearth, in a reasonable way, the historical development of the forty-year project in the DDR. Based in Berlin, the authors of the text sifted through the archives and memories, interviewing those who helped construct socialism in Germany at different levels of society.

Peter Hacks, a poet of the DDR, said in retrospect, ‘The worst socialism is better than the best capitalism. Socialism, that society that was toppled because it was virtuous (a fault on the world market). That society whose economy respects values other than the accumulation of capital: the rights of its citizens to life, happiness, and health; art and science; utility and the reduction of waste’. For when socialism is involved, Hacks said, it is not economic growth, but ‘the growth of its people that is the actual goal of the economy’. Risen from the Ruins lays out the story of the DDR and its people from the ashes of Germany after the defeat of fascism to the economic pillage of the DDR after 1989. 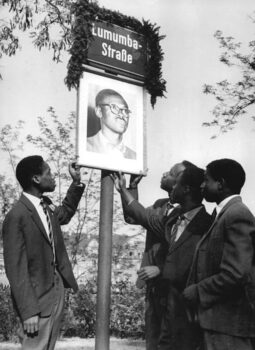 A monument to Patrice Lumumba built by Leipzig’s Free German Youth; the street was later renamed ‘Lumumba Street’ in a ceremony with Congolese students, 1961.

One of the least known parts of the DDR’s history is its internationalism, wonderfully explored in this study. Three brief extracts make the point:

The memory of this solidarity no longer remains either in Germany or in South Africa. Without the material support provided by the DDR, the USSR, and Cuba, it is unlikely that national liberation in South Africa would have come when it did. Cuban military support for the national liberation fighters at the 1987 Battle of Cuito Cuanavale was crucial for this defeat of the South African apartheid army, leading eventually to the collapse of the apartheid project in 1994. 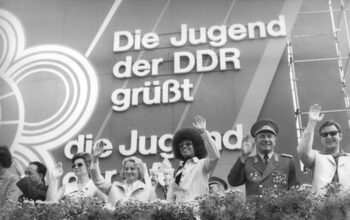 The Free German Youth, a member of the World Federation of Democratic Youth, hosted the Tenth World Festival of Youth and Students in Berlin, 1973.

Organisations such as the Federal Foundation for the Study of Communist Dictatorship in East Germany (Berlin) and the Victims of Communism Memorial Foundation (Washington, United States) exist not only to denigrate the communist past and to malign communism, but also to make sure that communist projects in the present carry the penalty of their caricatures. To advance a left project in our time–which is imperative–is made much more difficult if it must carry the albatross of anti-communist fabrications on its back. That is the reason why this project, led by IF DDR, is so important. It is not merely an argument about the DDR; it is also, at its core, a broader argument about the possibilities opened by experiments to create a socialist society and the material improvements they create, and have created, in the lives of the people.

Socialism does not emerge fully fledged nor perfectly formed. A socialist project inherits all the limitations of the past. It takes effort and patience to transform a country, with its rigidities and class hierarchies, into a socialist society. The DDR lasted for a mere forty years, half the life expectancy of the average German citizen. In its aftermath, the adversaries of socialism exaggerated all its problems to eclipse its achievements.

Volker Braun, an East German poet, wrote an elegy to his forgotten country in October 1989 called Das Eigentum or Property.

I’m still here: my country has gone West.
PEACE FOR THE PALACES AND WAR ON THE SHACKS.
I myself have given my country the boot.

What little virtue it possessed burns in the fire.
Winter is followed by a summer of desire.

I might as well get lost, who cares what’s next
And no one will ever again decipher my texts.

What I never possessed, from me was taken.
I will eternally long for what I didn’t partake in.

Hope appeared on the path like a trap
You grope and grab at the property I had.

When will I say mine again and mean we and ours.

Our quest here is not to reverse direction and exaggerate all the achievements while hiding the problems. The past is a resource to understand the complexities of social development so that lessons can be learnt about what went wrong and what went right. The IF DDR project, in collaboration with Tricontinental: Institute for Social Research, is invested in this kind of archaeology to dig amongst the bones to discover how to improve the way we humans stretch our spines and stand upright with dignity.