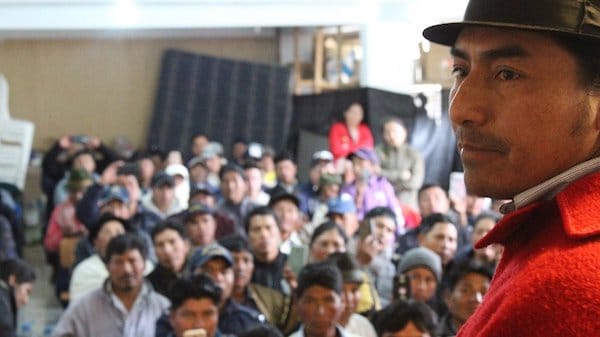 Nodal spoke with Leonidas Iza, president of the Indigenous and Campesino Movement of Cotopaxi (MICC), in between two elections. The first was the second round of the presidential elections, held on April 11, which saw neoliberal banker Guillermo Lasso elected with 52.3% of the vote, defeating Correista [supporter of former left-wing president Rafael Correa] candidate Andrés Arauz (47,6%), and with more than 2 million voters not turning up and a similar number casting blank or null votes. The second election will occur at the upcoming CONAIE [Confederation of Indigenous Nationalities of Ecuador] Congress, which will meet in the first week of May, and where Iza is a strong candidate for president.

CONAIE, the country’s main social organisation, is under important pressure due to its internal tensions, but despite this it has not split. The nomination of Yaku Pérez as the presidential candidate of Pachakutik, CONAIE’s electoral arm, polarised the different position within the indigenous movement. The party emerged out of the election as the second biggest force in Congress, though it missed out on making it through to the second round of the presidential race. Sensing fraud had taken place, CONAIE’s base decided to issue a call for an “ideological null vote”. In the last few weeks of the campaign, the pressure on indigenous leaders mounted, leading to various spokespeople coming out in support of Lasso or Arauz. The indigenous movement ultimately played the role of electoral arbiter.

Jaime Vargas, the other main leader [with Iza] of the October 2019 mobilisations [against austerity measures proposed by former president Lenin Moreno] and current CONAIE president, ultimately came out in support of Correa’s candidate, thereby bringing forward the debate over his successor. The decisions CONAIE takes will be key to Ecuador’s difficult future under Lasso as president. In this interview, Iza discusses the main weaknesses of the left that led to the right’s victory and announces his nomination to lead CONAIE.

What does Guillermo Lasso’s victory represent?

I believe it symbolises the defeat of an institutionalised left. The left as a whole has been dealt a blow, in Ecuador but also at the continental level. At the same time, it represents a breath of fresh air for the Ecuadorean right and the Latin American neoliberal right. The fact Guillermo Lasso chose to phone [former far-right Colombian president] Álvaro Uribe shortly after his victory and referred to him as a Latin American leader, gives us an indication of what we can expect from the next president.

Who is responsible for this political defeat?

It is a defeat for Correismo, and for the image of the left as a whole. But I believe the genuine left, the popular sectors, feel the need right now to enter a process of criticism and self-criticism. Logically, many popular sectors in Ecuador do not agree with [Correa’s] stance of persecuting the indigenous movement and other organised groups. Correa co-opted and divided the indigenous movement, in the name of the left, in the name of socialism. This is an enormous burden that the Ecuadorean left now has to deal with.

If we are being self-critical, do you believe the decision to call for a null vote helped paved the way for Lasso’s victory?

Yes. That is why I say that, perhaps, the left as a whole was unable to differentiate itself enough from Correismo, which hijacked some of the left’s positions. But no one can lay all the blame on just one section of the left, or better said, no one cannot simply blame Correismo; instead, the issue is that we have not been able to clearly articulate what the minimum, middle and maximum political program of the Ecuadorean left should be. And that is because, right now, Ecuador is polarised within the limited framework of Correismo versus anti-Correismo. I believe that it is absolutely necessary to overcome this limitation, because the Correismo/anti-Correismo polarisation only benefits the right in Ecuador. For example, the indigenous organisations that say they are neither left nor right, but that are anti-Correistas, end up working with the right.

What role should the indigenous movement play in the coming period? What does CONAIE have to offer the country?

Three things. First, we have a political project to offer, but one that must not be reduced down to questions of cultural identity. Instead, it has to go beyond that, and above all deal with the country’s economic, social and cultural problems. We need to channel greater collective participation into this political project. That was the mandate of the Parliament of the Peoples [held in the wake of the October 2019 protests], which involved more than 180 organisations, including not just the indigenous movement but popular sectors: housewives, workers in the private and public sector, etc.

The second point is that this political project cannot remain the property of a caudillo, of a strongman leader. It needs to be sustained by the social structures or organisations of civil society. And a third element is the issue of who leads. We are committed to building a collective leadership. Taking as our starting point our questioning of caudillism, of populism, we need to be able to put forward a collective leadership. This means rebuilding a left that not dependent on the ideas of certain individuals but rather on the ideas of each sector, of every leader comrade, of every intellectual comrade that can contribute to this process of rebuilding the Ecuadorean left.

Yet, we have just come from an election where even Pachakutik’s candidate fell into the logic of caudillism. [CONAIE resolved not to participate in the primaries to elect Pachakutik’s presidential candidate after Vargas, CONAIE’s precandidate, and Iza, MICC’s precandidate, were denied the right to run, and voting was restricted to individual party members at the exclusion of the indigenous nationalities and organisation that comprise CONAIE and collectively decide upon candidates]. How can we, within this framework, build that collective leadership, one that operates under the principle of leading by obeying?

This is an issue that has been present during the past few years and, in fact, is once again gaining prominence within the indigenous movement. We need to discuss this once again in order to not fall prey to individualist personalities or strong caudillos, as occurred in the last elections. That is why the principle of leading by obeying is so important. To be a leader, first of all, you must learn to respect the mandate of collective decisions. I also think it is important to discuss ensuring an equilibrium between men and women. A diversity of conditions are required for the indigenous movement to greater enable the presence and leadership of women comrades, the presence of youth as well, but respecting the historic tradition of struggle of the indigenous movement.

I believe there are many intellectuals that operate as external agents within the indigenous movement. The only thing they have done is promote ideas that come from outside of the structures of the indigenous movement, and only serve to stir divisions. They are the sectors that are in practice generating a division. But the indigenous movement is not divided, it is polarised. One wing of Pachakutik supports a position of a party based on individual membership. On the other hand, the nationalities and people draw upon our historic mandate of collective decision-making. There is a polarisation; there is no fracturing, there is no division, and this will be resolved at the next CONAIE congress in May.

As important as the collective is, there are roles that ultimately are filled by individuals. Are you willing to be president of CONAIE?

Collective decision-making does not annul the issue of individual participation. There needs to be an equilibrium: individual participation needs to be collectively debated. If ideas are adopted collectively, then when we assume roles as individuals, we do so subordinated to a collective process. For example, MICC has decided that I should stand as a candidate, on the basis of a consensus decision made by 25 organisations, 6 canton coordinating bodies and 20 elected authorities in the province of Cotopaxi. At our next assembly on April 20, this resolution will be made public in the lead up to the CONAIE congress in May.

Thinking about the different internal positions within CONAIE, do you believe there exists a sector that is anti-extractivist but not anti-neoliberal?

We need to analysis the indigenous movement using political and economic categories. When it comes to economic categories, we are not as homogeneous as we were in 1990. Back then, we were all farmers, we were all poor. Now we have a diverse indigenous movement, in economic terms. We have a section of the indigenous movement that is part of the financial system of savings and credit cooperatives; there is a sector tied to trade, another to industry, another to labour. There is the issue of migration: those who have left the countryside, principally the youth at the moment. This labour force now lives in the popular sectors of the big cities. So there is great diversity, in terms of economic and social categories, and, logically, CONAIE today has to encompass that diversity. In that sense, I believe that there is sector that is well-off in economic terms and ideologically backed the candidate of the right. But there are other sectors that, due to their strong rejection of Correismo, circumstantially felt they had to opt for Lasso. So we face a situation where we have to pay a lot more attention to details when closely analysing the situation of the indigenous movement today.

I’ll ask the question more concretely. CONAIE president Jamie Vargas said that Pachakutik has been “invaded by the right”. Do you agree?

Yes, the right has infiltrated us. The question is: how did they managed to infiltrate us? We no longer debate left ideas, instead the debate occurs within the framework of an Correismo/anti-Correismo polarisation. They have used this to mimic the left, to smuggle in a right-wing line within the indigenous movement. I can not say that all of Pachakutik has gone to the right, but there is a sector that is pushing it to the right. That is why we have said that they we need to rethink, we need to re-discuss the political project of the indigenous movement.

What is your opinion of Jamie Vargas’s decision to support Arauz? Rafael Correa said that Vargas’s support did not contribute even half an indigenous vote and instead managed to polarise the people of Quito against Arauz

I completely reject those opinions of the economist Correa. That is why I said: the left in Ecuador and in Latin America should not seek to divide. It should not seek to co-opt leaders and organisations. I think they are wrong, trying to co-opt the indigenous movement via comrade Jamie Vargas.

Jamie Vargas should not have done what he did, he went against a collective resolution. In this sense, I believe that comrade Jamie’s action was a result of his growing desperation that, logically, led him to take sides. That is why his statements had negative repercussions within the structures of the indigenous movement. But his actions were the consequence of earlier decisions taken by Pachakutik, because they broke with the collective logic at the start; they did not respect collective decision-making and ended up blaming Vargas. That is, it was a consequence of how the entire internal primary process unfolded. So no one person can be blamed, rather it is the fault of everyone who violated the collective mandate of leading by obeying, from the start of the primaries right through to the end, which in this case was Jamie Vargas’s statement.

Did you cast a null vote?

Yes, I cast a null vote. Based on the collective decision that was taken. One might have much clearer ideas, but we subordinate ourselves to the collective internal process.