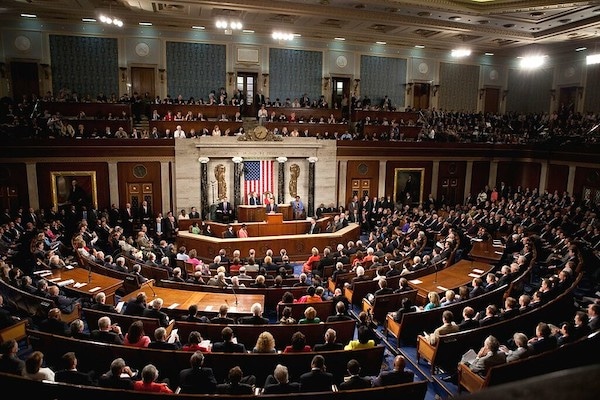 In his first speech to a joint session of Congress on April 28, Joe Biden made the calculation that he needed to directly address the needs of the working class. “20 million Americans lost their jobs in the pandemic–working- and middle-class Americans. At the same time, the roughly 650 billionaires in America saw their net worth increase by more than $1 trillion,” Biden noted, “[T]rickle-down economics has never worked. It’s time to grow the economy from the bottom up and middle-out”. Biden went on to highlight several specific reforms he supported that would have far-reaching implications for the lives of countless millions of working people.

Reminiscent of Cold War-era Democratic presidents, he couched this program in explicitly imperialist terms, cynically attempting to win favor for his policy of confrontation with China—a potentially catastrophic course of action that is already doing great harm to workers in the United States, China and the rest of the world. But what is unique about this speech is that the most powerful bourgeois politician used this most prominent of platforms to speak directly to the interests of workers as a class and propose a raft of progressive measures with real substance to address the issues of class and racial inequality. Understanding why this happened is of crucial importance to those who want to win these immediate reforms and socialists who envision an entirely new type of society.

This decision was not made out of the kindness of Joe Biden’s heart. Biden has been a loyal servant of big business his entire career — supporting anti-worker “free” trade agreements, deregulating the big banks and financial institutions, and helping eviscerate the social safety net.

Instead, Biden is making a political calculation taking into consideration the various pressures and problems facing the capitalist system in the United States. In the last ten years, socialist and other varieties of radical politics and demands have broken into the mainstream. The Occupy Wall Street movement, the rebellion in Ferguson that launched the Movement for Black Lives, the rising environmental struggle, the movement that developed around the Bernie Sanders presidential campaigns and this summer’s nationwide uprising against racism, along with other major struggles, fundamentally altered the shape of U.S. politics. In making the appeal he did in his speech to Congress, Biden is adopting the logic of bending so as not to break. He is proposing concessions to popular movements and claiming their demands as his own. This is both a major accomplishment for these movements, and a strategic challenge in terms of how to move forward.

At his inauguration, Joe Biden extended an olive branch to the right wing, offering to form a long-term partnership with the leadership of the Republican Party in the name of “bipartisanship” and “unity.” The Republican Party has shown little interest in this prospect—another factor that played into Biden’s decision to adopt the orientation expressed in his address to Congress. Republicans may come to regret this decision if the Biden administration continues along this path.

What did Biden call for?

Biden used his big speech to officially announce a major legislative initiative—the American Families Plan. It would establish universal pre-K and free community college education, subsidize childcare for working-class families, guarantee 12 weeks of paid family or medical leave, and make permanent a major tax credit for parents. Biden was explicit that these measures would be paid for by raising taxes on corporations and people making more than $400,000 a year.

The American Families Plan is the second part of Biden’s infrastructure proposal. The other component is the American Jobs Plan, focusing on upgrades to transportation, communications, housing and utilities. This also featured heavily in Biden’s speech, and he emphasized that 90 percent of the jobs this proposal aims to create do not require a college degree.

While he stopped short of endorsing a single payer healthcare system, Biden did say that “Healthcare should be a right, not a privilege” and called for the expansion of Medicare benefits. He argued that this could be paid for by cracking down on pharmaceutical corporations’ price gouging, calling prescription drug costs “outrageously expensive.”

Biden paid tribute to George Floyd and called on Congress to pass a police reform act. While the speech included lines about how most police officers serve their communities, he did feel compelled to state his determination to “root out systemic racism that plagues American life,” particularly in the criminal justice system. He called for the expansion of Pell grants to historically Black colleges and universities, which have long experienced neglect and discrimination from the federal government.

Biden expressed support for several other progressive measures in his speech, including: passing the PRO Act, which would dramatically expand the right of workers to organize unions; granting permanent relief from deportation to “dreamers” who arrived in the United States as children; passing the Paycheck Fairness Act on equal pay for women workers; making Temporary Protected Status, which is granted to immigrants fleeing catastrophic circumstances, permanent; and passing the Equality Act to prohibit discrimination against LGBTQ people.

“We’re in a competition with China and other countries to win the 21st century,” proclaimed Biden in his speech to Congress, later adding that he, “told President Xi that we will maintain a strong military presence in the Indo-Pacific just as we do with NATO in Europe.” Biden said that this was a “foreign policy that benefits the middle class … America will stand up to unfair trade practices that undercut American workers and industries.”

Biden’s embrace of progressive domestic policies has not diminished one bit his commitment to U.S. empire. This is also made clear in innumerable actions since he took office, including his refusal to lift the new restrictive measures placed on Cuba by the Trump administration and his maintenance of devastating sanctions on Venezuela.

Far from protecting “American workers and industries,” the drive towards all-out conflict with China will have a devastating effect—siphoning off huge sums of money for a senseless military buildup of epic proportions that could otherwise pay for social programs, and potentially forcing working people into a position where they are sent to kill and die for the profits of Wall Street and the weapons manufacturers.

But this framing also points towards an important historical trend. International pressure on the U.S. ruling class is frequently a main factor leading to the adoption of major reforms. The prospect that China could “win the 21st century,” coupled with the rising tide and radicalizing politics of the people’s movements inside the United States, forces the capitalist class to consider measures that would otherwise be dismissed out of hand.

Take for example the Franklin Roosevelt administration’s “New Deal.” Roosevelt faced an intense challenge from organized labor and growing socialist political parties amid the Great Depression. Meanwhile, in the Soviet Union there was no depression. In fact there frequently were shortages of labor as the country embarked on perhaps the most rapid pace of economic development of any society ever—a point frequently emphasized by socialist organizers. Roosevelt was in his own “strategic competition” with the Soviet Union, and the legalization of unions, the creation of social security and other measures were passed recognizing that U.S. capitalism looked woefully inferior by comparison.

The same was true for the end of Jim Crow segregation. The ruling class faced on the one hand the determined liberation struggle of Black people in the United States, and on the other a global confrontation with the Soviet Union, which was a champion of freedom struggles around the world against white supremacist colonialism.

A similar logic was at play in Lyndon Johnson’s “Great Society” programs that created programs like Medicare and Medicaid.

Far from fearing the rise of China or any other country, workers in the United States should welcome the decline of U.S. power around the globe. It puts our real enemies—big business and their servants in Washington—in a weaker position where they are more easily compelled to grant concessions.

What will it take to win?

It is of course far easier for Biden to proclaim his support for progressive measures in a speech than to actually accomplish them. Even watered down versions of what he called for in his address to Congress are likely to run into opposition from both the Republican Party as well as the more right wing section of the Democratic Party. These concessions are now on the table; winning them will take an intense fight.

If Biden and the rest of the Democratic Party’s leadership are serious about making this happen, they need to move to eliminate the filibuster. This legislative rule in the Senate effectively imposes a 60-vote requirement to pass most pieces of legislation, as opposed to a much more easily attainable 50%-plus-one simple majority. The filibuster could be scrapped without a single Republican vote.

Serious political pressure needs to be placed on Senators Joe Manchin, Kyrsten Sinema and other Democrat politicians with similarly intransigent right wing positions. Rather than being put on a pedestal as “bridge builders” who are able to hold seats in areas of the country with a high proportion of conservative voters, these enemies of the working class need to be shamed and shunned until they come to the table. Certainly the Republican Party has managed to discipline its own membership, who fear being labeled by primary challengers a “Republican in Name Only” if they are not in lock step with far-right orthodoxy.

Mass mobilizations, especially those involving the labor movement, would go a long way in creating the pressure necessary to force the passage of substantial reforms. Calling on the people to engage in any political activity other than voting or participating in electoral campaigns is a taboo for ruling class politicians. But for real change to happen, politics can not remain the exclusive domain of the rich where the workers are mere spectators.

Winning reforms can motivate people to get organized and fight for the long-term, proving that the struggle yields tangible results. The guilty verdict in the trial of Derek Chauvin, for instance, has not at all diminished interest in the fight against racist police terror. If people who believe in a new, socialist society are dedicated participants in these struggles, they can serve as a springboard for a movement to totally transform the government and the economy in the interests of the working class.