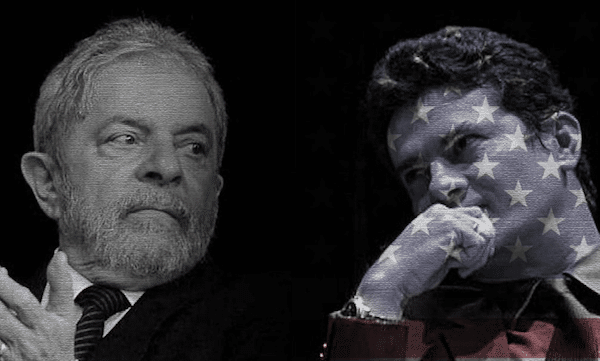 In November 2009, the Brazilian Federal Police Agents Association held its fourth congress in Fortaleza, Ceará, to discuss corruption, impunity and security at the World Cup. The meeting culminated in a scandal six years later, when, at the request of U.S. authorities, Swiss police arrested top level FIFA officials, including José Maria Marin.

The fact that the Brazilian Football Association, (Confederação Brasileira de Futebol/CBF), which Marin chaired, was the largest sponsor of the congress demonstrates conflict of interest. If the Federal Police investigates corruption, how could it have partnered up with an organization that would be at the heart of a corruption scandal a few years later?

The Federal Police Agents Association later issued a note to explain that there were other sponsors and that it did not know an investigation was underway against the CBF at the time. The biggest scandal at the congress, however, went unnoticed.

The congress brought together two central characters in any investigation into the spurious relationship between Lava Jato and the United States Department of Justice: U.S. prosecutor Karine Moreno-Taxman and Judge Sergio Moro, who was 37 years old at the time.

Already well known at the time for his role in the the Banestado corruption case, Moro was the first speaker in a panel entitled Fighting Corruption and Organized Crime. He argued for changes in legislation and for more autonomy in investigating crimes against public administration. “The pursuit and effective investigation of white collar crime is imperative within a democratic rule of law. It has nothing to do with communist ideology, left or right,” he said.

In the next panel, the representative of the United States government spoke, with Moro in the audience. Those present remember that Karine Moreno-Taxman spoke good Portuguese and gave advice which went on to be strictly followed by the Lava Jato task-force.

She suggested that Brazilian authorities maintain an informal system of collaboration with U.S. authorities. According to her, the formal system, foreseen in international treaties, should be sought only when there is a greater degree of certainty. “The more we work together, the more we will know who to look for, who to call. This means that borders are diminished and criminals are prevented from taking advantage of differences, as they will understand that we are true partners ”, said Moreno-Taxman. She also said that public opinion should be manipulated while investigating people with political or economic power–a tactic that would become a pillar of the Lava Jato investigation. To get the judiciary to punish someone for corruption, she said, it is fundamental to make the people hate the target of the investigation. “Society needs to feel that that person really abused the job and demand that he be convicted,” she said.

Moreno-Taxman. used the expression “king” to define the target that investigators should look for. “If you can’t bring this person down, don’t do the investigation,” she said. The dialogues accessed by hacker Walter Delgatti show how the tactics explained in her speech influenced Lava Jato.

Lava Jato prosecutor Carolina Rezende alluded it it in a Telegram chat in 2016. That year, the Lava Jato team was already making selective leaks to the media and omitting information, even from the Supreme Court, that contradicted their strategy of persecuting the “king”, including segments of the illegally wire tapped telephone conversation leaked to Globo TV network that showed Lula to be hesitant about Dilma Rousseff’s invitation to accept a cabinet position.

Other omitted information included a dialogue in which an OAS employee said that Lula’s wife Marisa Letícia had no interest in acquiring the Guarujá triplex apartment, despite having purchased a share of the condominium.

Sergio Moro was already well known to U.S. authorities when he was invited to speak at the Federal Police Agents congress in Fortaleza. In 1998, two years after assuming the post of federal judge, he attended a program at Harvard Law School. In 2007, after collaborating with FBI agents on an investigation in Brazil, he took another course–this time explicitly sponsored by the State Department–with visits to U.S. agencies and institutions in charge of preventing and fighting money laundering. It was in that year that Karine Moreno-Taxman was appointed by the U.S. Attorney General to occupy a newly created position at the U.S. Embassy in Brazil.

Between 2007 and 2009, she participated in events in practically all regions of Brazil. She was presented as an expert in complex cases, such as pedophilia and human trafficking. But, invariably, her speeches always returned to the subject of corruption and money laundering and the need for the formation of task forces to fight organized crime. The Americans even gave a name to this program carried out on Brazilian soil, Projeto Pontes (The Bridges Project).

The peak of Moreno-Taxman’s activity in Brazil took place in October 2009–a month before the meeting in Fortaleza–with a week-long course in Rio de Janeiro for judges, prosecutors and police. The U.S. Embassy sponsored the event and Moreno-Taxman was one of two U.S. officials responsible for selecting participants.

Sergio Moro didn’t just attend the course, he gave a speech criticizing Brazilian legislation and exposed 15 issues that he considered problematic in the fight against money laundering.

His presence at the course was not public knowledge until 2010 when Wikileaks released a U.S. State Department telegram with a report on the course and the news that many Brazilian judges and prosecutors expressed interest in receiving training from the DOJ on how to work on money laundering cases.

The telegram also refers to the willingness of members of the Brazilian justice system to work in partnership with the U.S. in this area, which they framed as “fighting terrorism”. The telegram itself says that the judges, contrary to what representatives of the federal government had expressed on other occasions, were receptive to the idea of bilateral cooperation.

There is no evidence of any concrete results on the justice system’s actions in relation to terrorism in the triple border of Brazil, Argentina and Paraguay in Foz do Iguaçu–a perpetual demand from the U.S. government since 9/11–but two investigations ostensibly related to money laundering were successful and both were led by judges who had historic close relations with the U.S. government.

The first was Operation Satiagraha, led by federal judge Fausto De Sanctis. The second was Lava Jato. Satiagraha took place in 2008, when Moreno-Taxman was already working in Brazil.

She made her relationship with the two judges clear during the opening of a course promoted by the Department of Justice at Fiesp, in São Paulo, in February 2009–nine months before the meeting in Fortaleza. The course was entitled Cyber Crimes and Immaterial Property, Forensics and the Internet, a topic then unrelated to the professional careers of Fausto De Sanctis and Moro. Nevertheless, according to Moreno-Taxman, the request for her to teach the course had been made by those two judges.

Moreno-Taxman’s speech was recorded in an official text published on the website of the 3rd Regional Federal Regional Court in São Paulo. In 2012, De Sanctis held a lecture on the use of artwork as a tool for money laundering at Marquette University in Milwaukee, Wisconsin.

The other speaker at the event at Marquette University was Karine Moreno-Taxman, who after leaving Brazil in late 2009, worked at the U.S. Embassy in Mexico and then took over as Wisconsin State Attorney General under far right Republican Governor Scott Walker.

Like De Sanctis, the judge who made waves by imprisoning prominent Brazilian businessmen, Sergio Moro also seems to have been a favorite of the U.S. Government and private sector. This is shown by the fact that, after resigning from his position as neofascist President Jair Bolsonaro’s Justice Minister, he was hired as a partner at the Washington DC law firm of Alvarez & Marsal.

The naive or the malicious will say that all of this is just a coincidence but it is in Brazil’s best interests to analyze this relationship in depth. After all, at least as far as Moro is concerned, the Lava Jato investigation that he supervised has caused a loss to Brazil of more than 170 billion reais in foreign investment and 4.4 million jobs, as shown in a recent study by Dieese.

When Lava Jato started, Brazil was the sixth largest economy in the world and had a horizon of prosperity, with the largest petroleum discovery of the 21st century. Today it has sunk to the World’s twelfth largest economy and crude oil is being exported while Brazil is buying fuel from the USA, as Brazilian refineries operate at 60% capacity.

It is no exaggeration to suspect that Moro, just as he apparently sold Lula’s conviction for a post in the Bolsonaro government, handed over Brazil to his American friends.

This article originally ran in Brasil 247, was translated by Brian Mier and can be read in its original Portuguese here.