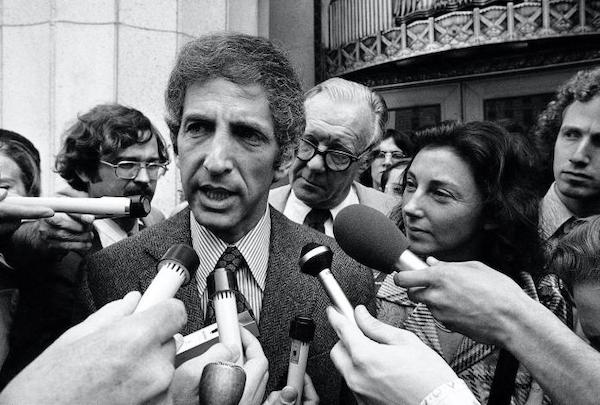 Daniel Ellsberg, co-defendant in the Pentagon Papers case, talks to the media outside the Federal Building in Los Angeles on April 28, 1973. [Source: nbcnews.com] 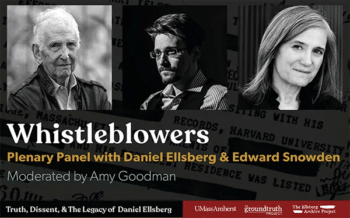 Dan Ellsberg, the legendary whistleblower who has been arrested more than 75 times for protesting the U.S. warfare state, has not mellowed with age.

At an online conference hosted by the University of Massachusetts-Amherst honoring Ellsberg’s legacy on April 30th and May 1st, the 90-year-old legend blew the whistle yet again.

He disclosed a secret government study, authored by Pentagon staffer Morton Halperin, which reveals that Secretary of State John Foster Dulles was ready to nuke Taiwan during the 1958 crisis over Quemoy and Matsu Islands during the height of the Cold War.

Ellsberg told Democracy Now host Amy Goodman that, in a meeting with the Joint Chiefs, Dulles conceived of a plan to use seven-kiloton weapons with the expectation that the Soviet Union, Communist China’s ally at the time, would hit Taiwan with nuclear weapons in response. 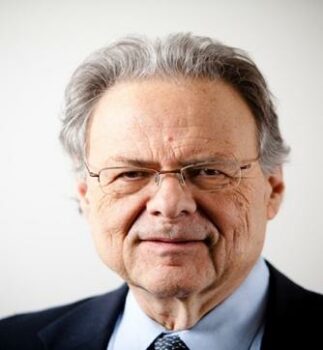 Morton Halperin. He led the project to do the “McNamara study,” or Pentagon Papers and became part of Ellsberg’s defense team. Halperin had nothing to do with Ellsberg’s revelation of a partly classified paper he wrote in the late 1950s. [Source: one.org]

Dulles, Ellsberg said, was “willing to destroy Taiwan to save it since the entire U.S. world position depended on it,” adding that “the history of 1958 deserves to be read” but that “one-third of Halperin’s study”—which Ellsberg has in his safe—”remains classified.”

Ellsberg stated further that “what I have just said subjects me to the same charges as Julian Assange and Chelsea Manning whose material was only secret—this was top secret.”

“If they want to bring that up, I will be happy to discuss it in front of the Supreme Court and if I lose, and the First Amendment loses, then my old retirement plan of being in prison will come into effect.”

In 1971, Ellsberg had faced a 115-year jail term for leaking the Pentagon Papers, a classified war study which exposed years of government deception on Vietnam.

At the time, he worked for the Defense Department and RAND Corporation, the Air Force’s think tank, after serving in the U.S. Marines in the 1950s and from 1965-1967 as a State Department official in South Vietnam during which time he became disillusioned with the Vietnam War. 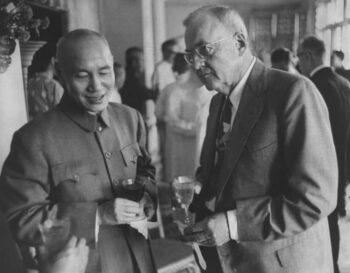 John Foster Dulles with General Chiang Kai-Shek. The U.S. had supported Chiang during China’s civil war. After his forces lost to the communists, the CIA helped set him up as leader of Taiwan, prompting the crisis with China, which considered Taiwan as part of China. [Source: outrider.org]

In his interview with Goodman, Ellsberg said that the 1958 documents are relevant now because “the same discussions about Taiwan are going on today in the Pentagon” and there is “still talk about destroying it.”

Admiral Charles J. Richard, who currently heads the U.S. Strategic Command, called on the nation’s military and civilian leaders to seek new ways to face threats by Russia and China, including the “real possibility” of “nuclear conflict.”

According to Ellsberg, Richard sounds like he is “criminally insane.”

With a high risk of nuclear war, “people in government have to show the moral courage of Snowden, Manning and Daniel Hale [drone whistleblower].”

From the Pentagon Papers to Watergate

In an article published in The Conversation on April 23rd, UMASS-Amherst historian Christian G. Appy, who helped convene the Ellsberg conference, detailed how President Richard Nixon’s (1969-1974) obsession with Ellsberg because of his leaking of the Pentagon Papers led directly to Watergate. 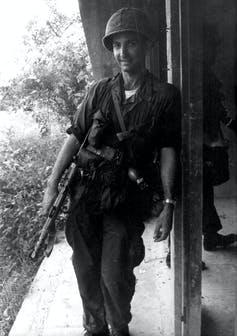 The Pentagon Papers covered the years 1945-1968, i.e., before Nixon became President; however, Nixon feared that Ellsberg would leak other information that could undercut some of his key policies and result in his impeachment.

The Nixon administration consequently indicted Ellsberg under the Espionage Act and Nixon established a special White House unit under Egil Krogh, Jr., known as the Plumbers, which broke into Ellsberg’s psychiatrist’s office seeking incriminating information about him.

The burglary was a dress rehearsal for the break-in of the Democratic National Committee headquarters at the Watergate Hotel, which led to Nixon’s likely impeachment and resignation.

Ellsberg meanwhile had his case dismissed because of the White House’s illegal actions.

Ellsberg: “I Was a Danger to Nixon’s Vietnam Policy”

During his plenary address at the UMASS-Amherst conference, Ellsberg told moderator Charles Sennott, founder of the Ground Truth Project, a grassroots news organization, that Nixon burglarized his psychiatrist’s office because he thought the psychiatrist had documents exposing his secret plans to end the Vietnam War and wanted information he could use against Ellsberg for blackmail. 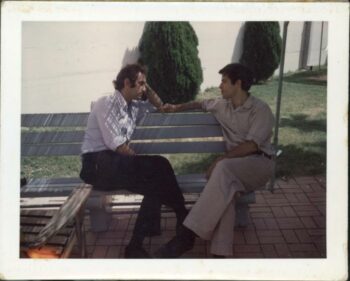 Dan Ellsberg and Randy Kehler seated on a bench together in 1971. [Source: ellsbergpapers.org]

According to Ellsberg, Nixon’s plan centered on removing U.S. ground troops to undercut the anti-war movement, sustaining funding for the South Vietnamese Army (ARVN), expanding the air war and threatening North Vietnam with a nuclear attack—which Nixon thought would “force Ho Chi Minh [North Vietnam’s leader] to sue for peace as soon as they heard.”

Nixon had gotten the idea for threatening nuclear weapons while serving as Vice President under Dwight Eisenhower who had made successful nuclear threats in the Taiwan straits and in Korea.

According to Ellsberg, Nixon was committed to preserving U.S. proxy Nguyen Van Thieu’s leadership over South Vietnam for at least another eight years—even at a huge cost in lives.

Thieu was a major sticking point in the peace negotiations on which Nixon would not compromise. 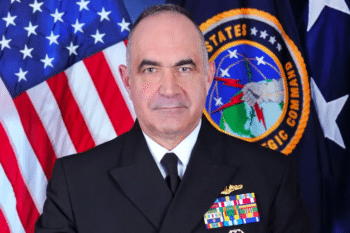 The reason was that Thieu had played a major role in helping Nixon win the 1968 presidential election by helping him to sabotage peace talks with North Vietnam.

These talks had brought Vice President Hubert Humphrey (D) closer to Nixon in the polls prior to the election, but Humphrey’s rise stopped abruptly when the negotiations stalled.

Nixon had to keep Thieu in power so he would not release communications revealing Nixon’s sabotage of the peace talks—an act of treason, i.e., an impeachable offense.

According to Ellsberg, “Nixon actually did what Donald Trump was accused of doing—colluding with a foreign power to win an election.”

And this is why Nixon went after him—because he did not want his treason exposed.