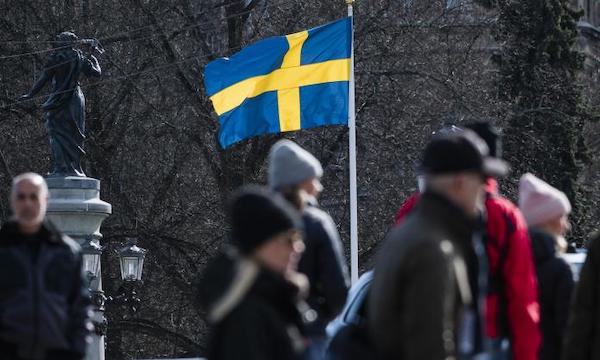 Sweden kept businesses, bars, restaurants, most schools and sports venues open for more than a year after first registering a coronavirus case in January 2020. State epidemiologist Anders Tegnell explained—in a now removed article in Dagens Industri, a Stockholm-based financial newspaper—that the country’s strategy to contain the virus would not “compromise our social functioning in a way that is more detrimental to any profits”.

The strategy has failed.

Sweden has the third highest per capita number of new daily COVID-19 cases in the world; infections are running at twelve and seven times the rate of neighbouring Finland and Norway respectively. Nearly 14,000 people have died and almost 1 million people have been infected. Swedish newspaper Dagens Nyheter has reported several incidents in which elderly patients with COVID symptoms were refused oxygen, placed on morphine, which is a respiratory inhibitor, and left to die. The healthcare workers’ union, Vårdförbundet, reports that one in five workers at Danderyd Hospital, Stockholm, have been diagnosed with COVID, and more than a quarter of staff who caught the virus reported having long-term health issues as a result.

Now, in the third wave, hospitals are overwhelmed. David Konrad of Karolinska University hospital told reporters from Dagens Nyheter that the hospital has an occupancy level of 170 percent. In Uppsala, a city north of the capital, the onus of preventing the spread of the virus has been put onto individuals; there are few limitations on most businesses.

The head of the infection clinic at Uppsala hospital, in an interview on the national public broadcasting network Sveriges Radio, warned:

If this continues, there are not many more resources left. We have no more staff to borrow. We are beginning to come close to catastrophe.

Across the world, the crisis has posed a dilemma for the capitalist class: either continue business as usual to secure immediate profits while the virus spreads, or minimise economic activity to limit the spread of the virus. Regardless of the horrific consequences of business as usual, Sweden became the model held up by the political right for how to respond to the pandemic.

Sweden is fighting coronavirus with common sense guidelines that are much less economically destructive than the lockdowns in most U.S. states.

Elon Musk, who in the following month announced on Twitter that he was breaking local restrictions to reopen Tesla factories in California, repeatedly glorified Sweden’s approach. Three weeks later, he admitted on social media that he was diagnosed with COVID—in Sweden.

When Sweden and Britain faced a second wave in November, prominent British far-right politician Nigel Farage justified his new anti-lockdown party, Reform UK, by pointing to the “credible alternative” to serious public health measures that was “effectively being practised to a large degree in Sweden”.

The “herd immunity” supposedly achieved through mass infection, which Swedish authorities proposed, was touted by figures such as UK Prime Minister Boris Johnson for months to justify trying to reopen large sections of the economy by allowing COVID to spread rapidly through Britain. Johnson met with the Swedish epidemiologist who was the architect of the no-lockdown strategy two days before delaying circuit breaker lockdowns in September 2020. A professor in microbial genomics at the University of Birmingham, Alan McNally, estimated that the delay was responsible for 1.3 million extra infections.

BBC Brazil reported in May that the fascist Brazilian President Jair Bolsonaro had gloated about Sweden to justify the lack of lockdowns in his own country. “Shall we talk about Sweden? Ready! Sweden hasn’t closed!” Close to 400,000 deaths officially have been registered in Brazil.

If [school students] are getting infected and they’re perfectly well, whilst they might spread it, it also creates a herd immunity.

Alan Jones claimed on Sky News in August that Sweden “got it right” and preached the importance of letting “the rest of us get on with our lives”. The Victorian branch of Pauline Hanson’s One Nation demanded that Australia “adopt a proven-to-work model from Sweden”. In October, Australian journalist Adam Creighton described Sweden as an “example of a sane response to what’s turned out a relatively mild pandemic”.

Maintaining business as usual has been responsible for hundreds of thousands, if not millions, of deaths around the world. It has destroyed the lives of many more whose health will be permanently impacted. Sweden’s mass infection strategy has been a total disaster.