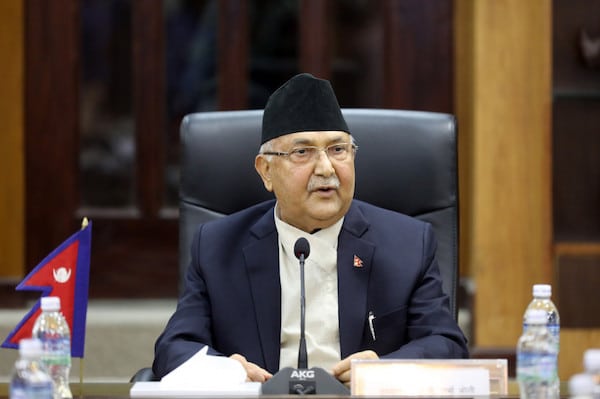 Nepal on Friday reported 9,023 new coronavirus infections, the highest-ever single day tally since the pandemic began last year. A total of 50 people lost their lives to COVID-19, taking the death toll to 3,579. The number of active cases stood at 78,629. On average, close to 50 percent of total tests are returning positive results.

But on Saturday noon, Prime Minister KP Sharma Oli told the CNN that the “situation is under control” in Nepal.

“Of course the pandemic is spreading in Nepal like it is in some other countries. The COVID-19 situation in Nepal is under control now we must say,” said Oli in response to how Nepal is placed to handle the surge in terms of resources and medical infrastructure.

Hours after, the Health Ministry released Saturday’s COVID-19 update. There were 53 new deaths in the past 24 hours, taking the death toll to 3,632. As many as 8,287 new cases were recorded in the last 24 hours throughout the country. The number of active cases stands at 83,493.

Just as Oli’s interview was live on TV, his press adviser Surya Thapa wrote on Twitter that Prime Minister Oli told the CNN that “the fight against the COVID-19 pandemic in Nepal is under control.” In the evening, Thapa tested positive for the coronavirus, for a second time.

Oli in his Saturday interview also went on to blame the people for the rapid surge in virus cases, which many said was nothing but a naked display of his ineptitude and cover-up for his government’s mishandling of the pandemic.

He boasted of having controlled the pandemic last year and said this time “negligence of the people increased”, thereby putting a maximum share of the blame on the public.While people’s carelessness did contribute to the rise in COVID-19 cases, political parties, including his, too fuelled infections, public health experts and analysts say.

“Oli is responsible for the spread of the virus as he is one of the leaders who organized several gatherings,” said Lokraj Baral, a professor of political science.

Oli cannot completely blame the people. It’s the government’s responsibility to control the pandemic, in which it has failed.

Just as Oli’s “situation under control” claim came, some members of his private secretariat as well as 26 members of the House of Representatives, including ministers, tested positive for the coronavirus.

Random tests were conducted at the prime minister’s residence ahead of the May 10 House session when Oli will move a confidence vote motion, after some people’s tests at Baluwatar came back positive.

The Secretariat of the Federal Parliament had conducted the polymerase chain reaction tests of lawmakers for three days starting Wednesday. As many as 18 lawmakers tested positive, while eight others had already been infected, according to the secretariat.

“We have a record of 26 members with COVID-19 positive results, including two ministers,” Gopal Nath Yogi, secretary of the House of Representatives told the Post.

The number could be higher as not all lawmakers have been tested yet.

“Reports of 50 parliamentarians and officials have yet to come. We discussed the voting arrangements for Monday at today’s Cabinet meeting,” said Pradeep Gyawali, minister for foreign affairs.

Speaker Agni Sapkota has called a meeting of the Business Advisory Committee to decide how arrangements could be made so that the lawmakers who have contracted the virus could vote on Oli’s confidence motion.

Bishal Bhattarai, chief whip of the ruling CPN-UML, said separate arrangements can be made for those who have tested positive for voting.

By suddenly seeking to go for a floor test, Oli has diverted his focus from governance to politics. His administration’s handling of the pandemic had continuously invited criticism. Analysts say Oli could have done much better by not playing political games when the second wave is devastatingly affecting the country, as people are dying for want of hospital beds, ventilators and oxygen.

Asked if allowing religious festivals that gathered huge crowds was mistaken, Oli went off in his response, blaming the political instability, which many say is brought up in the country by him, and lectured how no one should use the pandemic for political gains.

Analysts have for long blamed Oli’s poor governance and his penchant for political sechemings for the rising cases of the coronavirus in the second wave.

Many say when invited for an interview by the CNN, which has a wider viewership globally, Prime Minister Oli was offered an opportunity on a platter to brief the world on the current COVID-19 situation in Nepal and seek support of the international community in Nepal’s fight against the virus, especially when the country lacks vaccines, medical equipment and other essentials.

Before the interview, CNN also played a video clip of Oli’s May 2 address to the nation, in which Oli made a call to the world to support Nepal.

“Actually, instead of hiding the facts and saying the situation is under control, Oli should have told the international community the exact situation Nepal is facing,” said Bhojraj Pokharel, a former chief election commissioner.

The international community is well aware of the data and everyone speaks based on statistics and reasoning. But our leadership doesn’t give two hoots to the data and numbers and the story they tell.

While Nepal’s COVID-19 situation is becoming grave by the day, the vaccine crisis has also deepened, with the Health Ministry only on Saturday saying its plan to bring in 5 million doses of vaccine has been aborted for now.

Nepal currently does not have vaccines to administer the booster dose to those 1.3 million over 65 who got their first shots between March 7 and March 15.

Amid the pandemic, Oli’s plan to seek a trust vote in Parliament also has caused distraction, as opposition parties that were meant to hold the government to account are busy in their own political calculations.

It was not immediately clear if the May 10 House session would continue or it would be called off because a number of lawmakers and Parliament Secretariat officials have been infected.

“It’s the President’s prerogative… when to call a House session and when to prorogue it,” said Yogi.

The Parliament Secretariat will have to follow the fixed schedule and conduct the voting when it is required regardless of lawmakers testing positive, unless the House session is called off altogether.

Tika R Pradhan is a senior political correspondent for the Post, covering politics, parliament, judiciary and social affairs. Pradhan joined the Post in 2016 after working at The Himalayan Times for more than a decade.

Binod Ghimire covers parliamentary affairs and human rights for The Kathmandu Post. Since joining the Post in 2010, he has reported primarily on social issues, focusing on education and transitional justice.