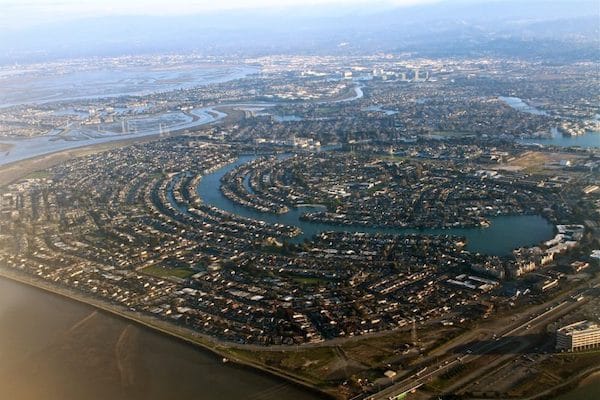 Silicon Valley from above

Digital transformation is based on a promise. Sometimes this promise is the “end of work,” a world where technology displaces human toil. In more modest moments, digital transformation promises widespread prosperity, where investing in technological innovation delivers economic growth for all.

These are attractive possibilities. Who wants to keep going to their bullshit job? And, if you have to keep going to work, at least you could get paid more. But after decades of investment in digital technology, it seems clear that this model for economic growth leads to the exact opposite of what it promised. Those of us who have work are working more, and we’re all earning less. Well, most of us.

While wages have stagnated across the Global North, investors’ wealth has soared. Digital transformation has played a central role in redistributing from labor to capital because it’s one of the most powerful justifications for financial deregulation. When we take a closer look at the history of digital transformation, this is hardly a surprise.

The promise of digital transformation is anchored in a discourse that the tech sector invented along with venture capital (VC) when they came together to lobby for reducing capital gains taxes in the late 1970s. That discourse enabled tech and VC to form a social bloc, and it was this discourse that persuaded a Democratic House, a Democratic Senate, and President Jimmy Carter that financial deregulation would drive economic growth.

The tech-VC bloc’s first victory was reducing capital gains taxes in 1978 from 50% to 28%. This victory set the mold for what came to be known as the Silicon Valley model, now emulated all over the world.

That the tech-VC bloc formed at all is just as surprising as its success in shaping the path of capitalist development over the past several decades. It may seem like common sense that tech and VC are natural allies. After all, VC is widely recognized as an essential actor for innovation. However, up through the 1970s, the majority of tech’s financing came from government sources, and the majority of VC went to sectors other than tech.

Despite lacking clearly complementary interests, tech and VC formed a social bloc when tech adopted a discourse that led it to view its interests as overlapping with VC. Adopting the discourse of supply-side economics, tech firms shifted their focus from securing demand for their goods to securing necessary supply factors, in particular, finance capital. In addition, adopting supply-side economics led tech to systematically overlook government support and focus instead on the private sector.

Discourse played an equally important role in the tech-VC bloc’s power over policy. Neither tech nor VC possessed the economic heft of more established sectors, like manufacturing. Accounting for 2.6 percent of GDP and employing no more than 4.5 million Americans in 1978, tech’s footprint was miniscule when compared with manufacturing, which accounted for 22% of GDP and employed more than 20.6 million. Manufacturing and other important sectors, such as small business, had no interest in capital gains taxes; they wanted to reduce corporate income tax.

So how did the tiny tech-VC bloc get its way?

The tech-VC bloc was able to influence economic policy because it presented policymakers with a simple causal framework that connected financial deregulation to economic growth. This is the Silicon Valley model. It is composed of four arguments: (a) reducing capital gains taxes is necessary for technological innovation, (b) technological innovation increases productivity, (c) productivity increases spur economic growth, so that (d) reducing capital gains taxes is necessary for economic growth.

This framework enabled the tech-VC bloc to present its interests as consistent with the national interest. Referring to a survey of tech firms’ reliance on VC, one lobbyist declared that it “leads us to the answer to the question of who benefits most from the capital gains tax reduction. Our survey says all of us. Really, it is the American people.”

Some American people have certainly benefited from financial deregulation and the larger policy program associated with digital transformation. Some tech workers have become wealthy, and are charged with gentrifying many major cities, among other sins.

Still, most tech workers can only dream of the “giraffe money” their firms’ investors and executives are making. And many tech workers are simply too busy to dream, as employers like Google have increasingly shifted their workforce to part-time, contingent contracts. These contracts lack the benefits that otherwise make the tech sector such a “great place to work,” and often include lower salaries as well. While tech workers have become increasingly disposable, investors and executives have become ever wealthier. Jeff Bezos now receives $13.4 million per hour.

What focusing on the role of discourse in digital transformation illustrates is the degree to which this growth model is based on a promise. The tech-VC bloc has succeeded in shaping policy to meet its interests by inventing a framework in which financial deregulation should lead to economic growth and widespread prosperity. But this promise raises a question: how necessary is financial deregulation to economic growth in the Silicon Valley model, and who does this kind of growth actually benefit?

Stories don’t need to be true to be powerful, but promises are a dangerous basis for economic growth. What happens when the promise of digital transformation doesn’t deliver? The answer is becoming increasingly clear. Workers are beginning to see that their interests do not always align with their bosses’.

As workers at numerous tech firms, from Glitch to Google, begin to unionize, they’re discovering that management’s discourse for defining their interests falls just as short as the promise of widespread prosperity. Instead, workers are developing new discourses that recognize that digital transformation leaves them right where they’ve always been: at work.

Sidney A. Rothstein is an Assistant Professor of Political Science at Williams College.