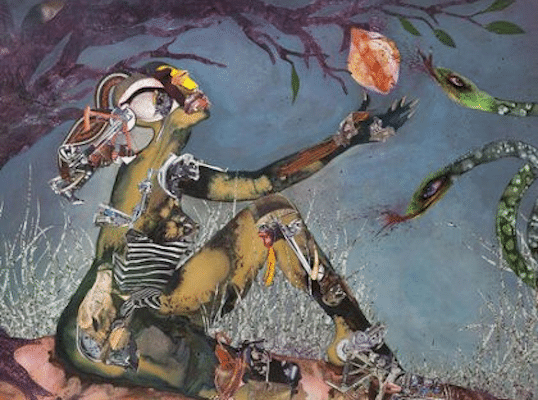 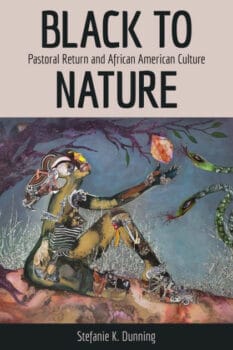 In this series, we ask acclaimed authors to answer five questions about their book. This week’s featured author is Stefanie K. Dunning. Dunning is Associate Professor of English at Miami University of Ohio. Her book is Black to Nature: Pastoral Return and African American Culture.

Stefanie K. Dunning: Black to Nature  can help readers think about the impact of nature on Black self-making in the 20th and 21stcentury. Understanding that the Great Migration of Black folks from the South to the North in the early years of the 20th century was in part triggered by lynching violence in the South, my book thinks through the recent trend of Black folks moving back South. I argue this is tied to the geographic universality of anti-Black violence. If it’s true that one is equally as likely to be killed on a street corner in New York City as one is to be killed in a rural Southern location, then Black to Nature  explores new emphasis in Black literature and popular culture on rural pastoral settings in order to think through what the Black person might gain from actual, symbolic, and textual engagements with nature and what is made possible in giving up the myth of the American progress narrative.

In the book I talk about a number of important cultural and social moments, from Hurricane Katrina to representations of Black farmers and farming. Black to Nature  seeks to highlight aspects of Black American life neglected by mainstream media which reduces the Black experience to one of the “inner city.” My goal here is not to devalue the city or city narratives; but rather to diversify and complicate Black experience in the United States. There is a long-standing tradition not only of Black nature appreciation, but of Black life in the country. My book explores various social, political, and cultural sites that explore and highlight the Black pastoral experience.

What do you hope activists and community organizers will take away from reading your book?

I hope that activists and community organizers will read Black to Nature  and understand that under-valued, rural, and pastoral locations embody generative possibilities for liberation. I also hope that the book will “make space” in the cultural imagination for a Black experience of the world that is woefully underarticulated in our current representational landscape.

Because the book blends personal narrative with textual analysis, I also hope that people who read the book feel a sense of “realness” that pervades the text. The ideas, issues, texts and analysis embedded within those pages, despite whatever theoretical language is leveraged to make complicated arguments, represent issues of the utmost personal importance to me.

Perhaps most importantly, though, I hope that activists and community organizers will seriously consider the possibility that within the context of American society and/or Western societies, any possible “gains” can only be harm mitigation at best. I hope that activists read Black to Nature  and come away with a holistic understanding of the Afro-Pessimist argument for abolition. Abolition, while it might sound horrible at first glance to some, actually represents the best hope for humanity and the environment, both of which together constitute “nature” as an entity. This insight can inflect activist work and community organizing in that while we begin to understand on a structural and foundational level that this civilization as we know it cannot be saved, we can do things to make day to day life for folks better and safer without mistaking those adjustments for the liberation of Black folk, and by extension, of the world.

We know readers will learn a lot from your book, but what do you hope readers will un-learn? In other words, is there a particular ideology you’re hoping to dismantle?

As I show in the book, some historical nature-aversion exists in the Black community in part because colonialist discourse defined nature as “primitive.” I show that nature was the European’s “first other,” and thus, all people deemed “other” were aligned with nature and primitivism in racist, violent, and cruel ways. These discourses victimized not only Black people but also nature itself. Thus, feelings “against” nature have their roots in slavery and colonialism. I would like for people who are afraid of nature, or who hate nature, to unlearn everything they think they know about it and look again.

One of the things I wish to see “unlearned” is the notion that nature is dangerous. To some extent, all environments are dangerous. It is dangerous to walk down a city street if you don’t know how to negotiate traffic; but we learn how to move in those spaces and thus dramatically increase our sense of safety in them. The same is true of nature. After spending time in nature and learning its rules and codes, it is as safe as any other environment—which is to say, danger is always present but not necessarily a foregone conclusion. Is it possible you could be bitten by a snake if you step in the wrong place in the woods? Yes. Is it possible you could be hit by a car driven by a drunk driver even if you’re following all the rules in the city? Yes. Why do we consider one an acceptable risk and the other not? I submit it is because we’ve been coerced into seeing nature as dangerous for the purpose of maintaining Western civilization as it currently exists. Consider just what a problem the maroons were for slaveholders. But to be a maroon you had to be comfortable disappearing into the wilderness. Think how much natural genius Harriet Tubman had to have to liberate herself and so many others. So for me, getting into nature and learning how to “be” in wild/pastoral spaces isn’t just good for your health—it is a revolutionary act.

Who are the intellectual heroes that inspire your work?

I feel so fortunate to be a scholar working at this time when there is so much wonderful thinking in the world. One of my intellectual heroes is Sharon P. Holland, whose work, with its beautiful, insightful and poignant explorations,—over the span of my career as an academic—has shaped my thinking and been a North Star for me in terms of pursuing my own voice and vision in my work. I also love Robert Reid-Pharr’s work, which with its perceptive readings of culture and elegant writing has always served as an aspirational model of where I’d like to one day end up. Black to Nature  is also indebted to the work of Jared Sexton and Calvin Warren, whose insights truly changed how I think and made the articulation of certain positions possible.

I also don’t think I’d be the scholar I am without the work of Hortense Spillers, whose insights made possible a whole generation of Black and Black feminist theoretical work. Likewise, the work of LaMonda Stallings, Michelle Wright, C. Riley Snorton, Anissa Wardi, Candice M. Jenkins, and bell hooks have all shaped and inspired me as a scholar. My thinking has also been deeply shaped by my experiences as a meditator and by my studies of Zen Buddhism. Thich Nhat Hanh’s work deeply inflects Black to Nature. Likewise, the work of David Abram and Linda Hogan helped me articulate ideas about nature that informed my work in vital ways. The poetry of Lucille Clifton has been absolutely essential in helping me tap into my deeper feelings about nature as a Black woman. Every single person listed here, and many I don’t have space to list, has given me such an immeasurable gift that I can only hope Black to Nature  serves as homage to their work and their lives.

In what way does your book help us imagine new worlds?

I suggest that we begin to imagine the world in post-civilization modalities, following the lead of our elder writers like Octavia Butler and Suzanne Cesaire. In their work they produce a vision of Black life that rises after the fall of Western civilization, one where the role of nature is not to be tamed, used, conquered and brought to heel as it has been in the Western tradition; but rather, where nature is understood to be constitutive of humanity and life itself.

Black people, and especially Black women, are so often made to feel as if we are “out of place” and that we don’t “belong” anywhere. We are made to feel as we are aberrations and as if we don’t have a right to “simply be.” As we see all too often in the news, Black folks just living their lives are policed as if they have no right to life. You can’t gather in the park, you can’t bird watch, you can’t have a lemonade stand, you can’t laugh in public with your friends, you can’t play video games with your nieces and nephews in your house—all of these are ways in which the racist, anti-Black state communicates that our place is nowhere. We are made to feel that our hair, our skin, and the shape of our bodies is somehow “wrong.” Black to Nature explicitly rejects this logic by showing that Black people belong to this world, because it is natural  to be Black. To be Black is not an aberration; it is as much in alignment with the right order of the world as the sun rising in the morning. In a broad way, my aim is to show that we do, indeed, have a right to the tree of life. Thus, I hope Black to Nature  asserts and shows all the ways in which Blackness flows from the hand of creation.