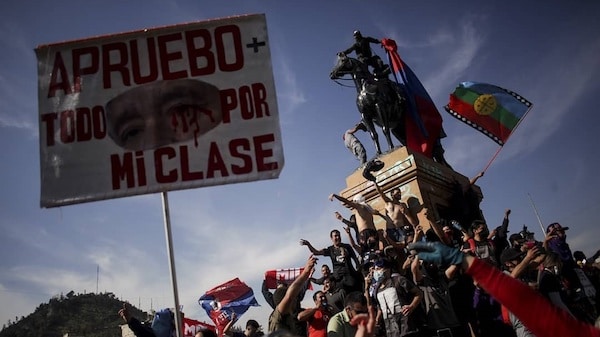 “I approve it for my class,” reads the banner supporting the vote for a new constitution in Chile. (Photo: Frente Fotográfico)

This weekend, on May 15 and 16, over 6 million Chileans participated in the the polls to elect the 155 members of the Constitutional Convention, a body responsible for writing the country’s new constitution. Late last night, Chile’s Electoral Service (SERVEL) published the preliminary results, according to which, the independent and left-wing forces obtained resounding triumphs and won the majority of seats in the Constitutional Convention. Meanwhile, the right-wing forces, who had vowed to block any social reforms in the constitution writing process and were expressly against a new constitution at all, suffered a great defeat.

With 99.13% of the votes counted, the independent candidates from different social movements, trade unions and other popular organizations, who emerged during the social uprising of October 2019, won 48 seats. The “I Approve Dignity” list, made up of left-wing political parties such as Communist Party of Chile, the Broad Front, among other anti-neoliberal parties, won 28 seats. The “Approval” list, consisting of center-left, socially democratic parties secured 25 seats. The “Let’s go for Chile” list, a coalition of right-wing parties including the ruling alliance, obtained 37 seats. The results for the 17 seats reserved for Indigenous communities in the Constitutional Convention will be shared separately later this week.

Along with these elections, regional and municipal elections were held to elect 16 regional governors, 345 mayors and 2,240 municipal councilors for the period 2021-2025. Although the final results of these elections will not be known until the end of the week, the preliminary results indicate a similar blow to the governing coalition, which lost important mayors offices and regional governments. Meanwhile, the left-wing parties retained their municipalities and gained several others across the country, including in the capital Santiago.

According to preliminary results, Rodrigo Mundaca, a prominent social leader and human rights defender, is poised to be the governor of the region of Valparaíso, the second most important region in the country. Similarly, Jorge Sharp of the Broad Front seems to be re-elected as the mayor of Valparaíso, while Macarena Ripamonti of the Broad Front is leading to become the mayor of Viña del Mar, traditionally dominated by the right-wing, and Daniel Jadue of the Communist Party seems to be re-elected as the mayor of Recoleta.

Chilean President Sebastián Piñera also recognized the overwhelming defeat of the ruling party and the traditional parties in the elections and the dissatisfaction of the population towards them. In his address to the nation, referring to the results, Piñera said that today “the citizens have sent a clear and strong message to the government and also to all traditional political forces. We are not adequately tuning in with the demands and desires of the citizens. We are being challenged by new expressions and leadership” and added that “it is our duty to listen with humility and attention to the message of the people.”

The majority of constituents are clearly in favor of structural changes and against the economic and political model in place for the last five decades. It seems that Chilean society is one step closer to achieving progressive changes and emancipating itself from the current constitution, which promotes socioeconomic inequality, and was drafted and imposed in 1980 under the military dictatorship of General Augusto Pinochet (1973-1990).

Chile’s uprising which started with high school students rejecting transportation fare hikes but managed to galvanize the majority of the population, has seen its first electoral manifestation, a ratification for change and broadening of rights for the people.