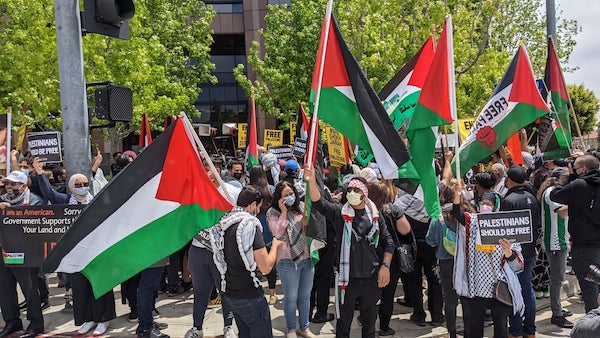 In just the last week, the situation in occupied Palestine and the larger region has seen a dramatic shift. A new wave of resistance has sparked militant mass protests not only in cities and towns across the West Bank, East Jerusalem, and Gaza, but also in many Palestinian or “mixed” cities inside the 1948 borders of Israel. Protests were reported May 14 in Jordan and Lebanon, and at least nine Palestinians were killed by live-fire ammunition in West Bank protests with many more wounded.

The importance of the mobilization in all four parts of Palestine cannot be overstated. Israel is determined to crush these protests with unlimited violence, but so far the demonstrations have continued to spread.

On May 9 and 10, thousands of Palestinians traveled from cities and towns inside the 1948 borders of Israel. They joined crowds that grew to nearly 100,000 in Ramadan prayers at the Al-Aqsa mosque, one of the most important Islamic religious sites. Many also joined protests in the Sheik Jarrah neighborhood of East Jerusalem, where the Israeli government is attempting to evict Palestinian residents to make way for more Israeli settlements.

The Al-Aqsa worshippers were brutally assaulted by Israeli police firing stun grenades, tear gas, skunk water and plastic-coated steel bullets. More than 200 Palestinians were wounded on May 9 and over 300 on May 10, with most requiring hospital treatment.

On May 10, Hamas, the governing party in Gaza, gave the Israelis an ultimatum to withdraw from the Al-Aqsa area and halt the brutal repression. When they didn’t, Hamas fired rockets into Israel from Gaza. Israel launched hundreds of air strikes on the Gaza Strip that have so far (as of May 14) killed at least 126 people, about a quarter of them children. On the Israeli side, seven have been killed and over 100 wounded. Intense shelling near border areas has forced 10,000 Palestinians to flee their homes.

Two million people living in Gaza, the world’s largest open-air prison, are prevented from coming and going by the Israeli occupation. The Israeli air force, in their U.S.-provided F-16 fighter/bombers, have particularly targeted large residential towers in Gaza–which already had an acute housing shortage.

The power of the Palestinian resistance has coming as a surprise to the political establishments in Israel, the United States, the European Union and many countries in the region.

In keeping with time-honored practice, U.S. leaders including Secretary of State Blinken, Secretary of “Defense” Austin, Speaker of the House Pelosi and President Biden, have echoed each other with their usual rhetorical refrain, “Israel has the right to defend itself”–as if Israel is the victim and the Palestinian people are the aggressors.

The United States. provides more than $3.8 billion in military aid to Israel every year and protects Israel from criticism and other actions in international bodies.

U.S. support for Israel continues despite the fact that in recent months, two moderate human rights organizations, B’tselem and Human Rights Watch, have issued reports conclusively showing that Israel is an apartheid state.

In a significant first, a debate was held in the House of Representatives between two blocs of Democrats, one group uncritical supporters of Israel and the other supportive of the Palestinian cause. The latter group includes Representatives Rashida Tlaib, Ilhan Omar, Betty McCollum and Alexandria Ocasio-Cortez, and was organized by Rep. Mark Pocan. Tlaib, the first Palestinian American member of Congress, said,

Palestinians aren’t going anywhere, no matter how much money you send to Israel’s apartheid government.

International solidarity more important than ever

Palestine is located in the heart of the Arab world, both in a geographic sense and in the consciousness of the Arab people and other peoples of the Middle East. It is for that reason the rise of the mass struggle in Palestine has implications for the entire region.

Many solidarity demonstrations here and around the world have already taken place and hundreds more will over the coming days. May 15 is Nakba Day. “Nakba” means “catastrophe” in Arabic and refers to the genocidal expulsion of 750,000 Palestinians to make way for the Israeli state in 1948. Protests are planned in more than 60 cities in the United States and many more worldwide.

Over the past century, the Palestinian people have suffered many setbacks at the hands of imperialism and Zionism. They have been counted out time after time: in 1948, 1967, 1982, 1993, 2018 and more. But they have not gone away and they have never surrendered.

David Ben-Gurion, the first prime minister of Israel, was once asked what would happen to the Palestinian refugees who Israel evicted and refused to allow to return. He replied: “The old will die and the young will forget.” In fact on Nakba Day 2021, many of the “old” are still alive, and the young–their grandchildren and great-grandchildren–are today fighting for liberation in the cities and towns of Palestine. They deserve the support of all who believe in justice.