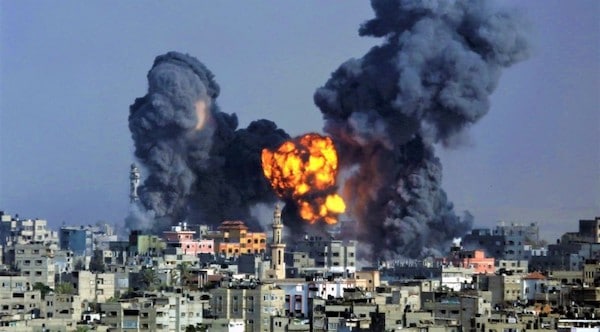 In this July 22, 2014 file photo, smoke and fire from a devastating Israeli airstrike rise over Gaza City during the holy month of Ramadan. Photo by Hatem Moussa.

NDP leader Jagmeet Singh’s recent call for an arms embargo on Israel is a welcome development. A halt to weapons deliveries is one way to pressure Israel, whose military has killed about 100 Palestinians, including 20 children, in recent days. While less discussed, however, there are even simpler ways to curtail direct Canadian involvement in Israeli violence against Palestinians.

On Wednesday, Singh organized a press conference calling on the Trudeau government to suspend all weapons sales to Israel. Later that day, he raised the issue in the House of Commons and argued that “by arming one side of the conflict it is undermining the peace process and it is supporting the illegal occupation.”

Singh should be applauded for promoting the position of NDP members who overwhelmingly supported the Palestine Resolution at the party’s convention last month. The resolution called for “suspending the bilateral trade of all arms and related materials with the State of Israel until Palestinian rights are upheld” and “ending all trade and economic cooperation with illegal settlements in Israel-Palestine.”

Another position the NDP leader could adopt to lessen Canadian complicity in Israeli aggression is to call for the application of this country’s laws concerning support for foreign militaries. The Foreign Enlistment Act makes it illegal to induce or recruit for a foreign military, while Canada Revenue Agency guidelines state that “supporting the armed forces of another country is not” a charitable activity.

Despite these well-established and clearly defined laws, for 70 years Canadians have been recruited into a foreign military that is actively dispossessing Palestinians. In 1947-48 more than 300 Canadian Second World War veterans were recruited to go to Palestine to support the Zionist movement and subsequent ethnic cleansing, also known as the Nakba, when more than 700,000 Palestinian Arabs fled or were expelled from their homes.

In his biography, the heir to Tiptop Tailors, Ben Dunkelman—the main Canadian recruiter for the predecessor to the Israeli military, known as the Haganah—claimed “about one thousand” Canadians “fought to establish Israel” (during the First World War, hundreds of Canadians, including General Charles ‪Macpherson Dobell, also fought with the British to conquer Palestine). Indeed, dozens of Canadians reportedly fought with the Israel Defense Forces during major recent assaults on Lebanon (2006) and Gaza (2009, 2014).

According to recent IDF statistics, an average of 200 Canadians are fighting in the Israeli military at any given time. Beyond their direct role in enforcing the blockade of Gaza and staffing West Bank checkpoints, foreign soldiers joining the IDF are a powerful symbol to reassure Israelis who may be weary of IDF violence. This may be why significant efforts are devoted to recruiting non-Israelis to join the IDF.

In June, United Jewish Appeal of Greater Toronto and Federation CJA Montréal publicized a webinar titled “Joining the IDF,” which claimed to offer participants “everything you need and want to know about joining” the Israeli military. On several occasions the Israeli consulate in Toronto has advertised that they have an IDF representative available for personal appointments for those wishing to join the IDF.

In 2019 the Israeli consulate in Toronto announced:

An IDF representative will conduct personal interviews at the Consulate on November 11-14. Young people who wish to enlist in the IDF or anyone who has not fulfilled their obligations according to the Israeli Defense Service Law are invited to meet with him.

At the same time as Canadians are being recruited to join the IDF—in violation of the Foreign Enlistment Act—some registered Canadian charities continue to support the Israeli military in probable contravention of Canada Revenue Agency regulations. The Jewish National Fund of Canada has openly financed numerous projects supporting the Israeli military and illegal settlements in the occupied territories. Other taxpayer subsidized charities such as Canadian Magen David Adom for Israel and Beit Halochem Canada (Aid to Disabled Veterans of Israel) have directly or indirectly supported the IDF.

In 2018, the Toronto-based charity, HESEG Foundation, which was established “to recognize and honor the contribution of Lone Soldiers to Israel,” spent more than $9 million in Israel.

With registered Canadian charities raising over a quarter billion dollars for Israel-focused projects in 2018, tens of millions of dollars in taxpayer subsidized donations are likely supporting the IDF, directly or indirectly.

The Canadian Foreign Policy Institute has called on Minister of National Revenue Diane Lebouthillier to direct the Canada Revenue Agency to investigate whether taxpayer subsidized charities are supporting the Israeli military in violation of charity guidelines. Additionally, a campaign was launched in October to pressure Justice Minister David Lametti to investigate illegal Israeli military recruitment in Canada.

The campaign includes an open letter signed by Noam Chomsky, Roger Waters, Yann Martel and many others as well as a parliamentary petition sponsored by NDP MP Matthew Green calling for an investigation into illegal Israeli military recruitment in Canada. Since the petition was launched last month, it has already been signed by four times the number required to be read in the House of Commons.

It is well past time to upend Canada’s direct contribution to violence against Palestinians. NDP leader Jagmeet Singh should add his voice to those seeking to protect Palestinians from Israeli violence by pressuring government officials to apply Canadian law.